Number of NHS executives earning £250,000 or more rises by 50% in a year – as Sajid Javid opens the door to pay increases for senior managers

36 managers working within the National Health Service’s trusts or clinical commissioning groups now earn more than a quarter of a million pound, compared to just 23 earning within the same pay bracket in 2020.

The exponential rise in high-earners was criticised by one senior Tory MP, who blasted the figures as ‘unacceptable’ and expects a backlash from voters after April’s planned £36bn National Insurance hike, reports The Telegraph.

It also emerged on Saturday that Health Secretary Sajid Javid had given the green light to overhaul NHS management and rip up established pay brackets to help attract the ‘best leaders’ across the country.

Earlier this year, critics slammed the creation of 42 chief executives of integrated care boards in England, whose job will be to ‘deliver joined-up services’ across the NHS and social care.

And those positions appear to already be attracting significant salaries, with online adverts revealing each executive will be paid an average of £223,261.

It comes after members of the Royal College of Nursing (RCN) earlier this month voted overwhelmingly in favour of industrial action as a warning shot to No10 about their anger over a purported 3% pay rise offer.

36 managers working within the National Health Service’s trusts or clinical commissioning groups now earn more than a quarter of a million pound, compared to just 23 earning within the same pay bracket in 2020. [File picture]

Health Minister Edward Argar provided new data on Saturday that showed more than 7,000 NHS managers were earning between £80,000 and £129,999 this year.

The total number of ‘very senior managers’ within the NHS has also risen from 944 in September 2009 to more than 2,700 in the last year, per the most recent data.

It comes as new polling figures showed almost 50 per cent of people (48%) feared there was too much waste within NHS spending, compared to just 21 per cent who disagreed.

In the poll by Redfield & Wilton Strategies, 34 per cent of those surveyed believed the health service will not be able to spend the new £12bn National Insurance tax hike efficiently. 37 per cent argued that it would.

An NHS spokesman said: ‘The NHS is one of the most efficient health services in the world, with administrative costs of less than 2p in every pound of NHS funding, compared to 5p in Germany and 6p in France.

‘Managers are essential to ensuring that the NHS has the right staff, with the right skills to deliver the improvements for patients set out in the Long Term Plan.’

British taxpayers have been warned that Boris Johnson’s manifesto-busting NHS handout will be ‘gobbled up’ permanently by the health service, with waiting lists and delays here to stay.

The cash injection has been given to the NHS without any firm targets to meet, which has raised fears the money will simply be swallowed. NHS bosses have already complained the sum isn’t enough to clear the backlog.

Under proposals, half of the £10bn a year will be spent on social care in 2023 before the full amount is devoted to the care sector in 2025 and, in theory, the NHS reverts to its normal budget.

Critics have raised doubts about the plan, claiming that if the NHS goes on a recruitment spree to plug staffing gaps then a higher budget will become ‘baked into the system’.

Mr Javid is also understood to have written to the independent review body for pay, requesting updated salary recommendations for ‘very senior managers… for 2022 to 2023’. 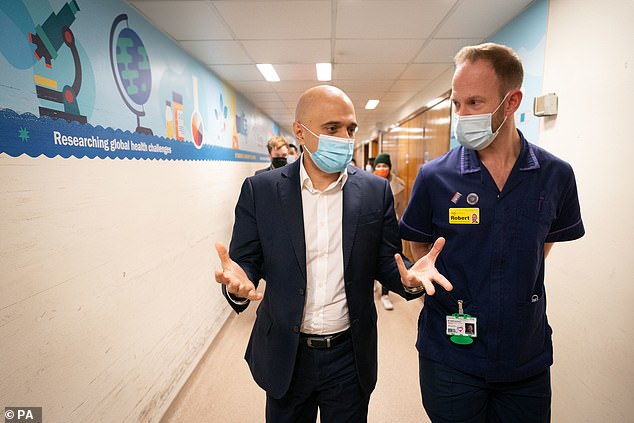 In his request, the Health Secretary explained the NHS should ‘recruit, retain and motivate its senior workforce’ and would therefore require the Senior Salaries Review Body to propose a ‘revised VSM pay framework’, reports the Telegraph.

Earlier this month, the RCN union said it has not decided on next steps yet after more than 89 per cent of its most recent balloters said they would be prepared to take part in industrial action.

Responding to the results, nursing leaders said members felt ‘disrespected and devalued’ over the 3 per cent offer and that it would do noting to address huge staff vacancies.

However Government has insisted the 3 per cent pay rise, which it says increased nurses pay by an average of £1,000 a year has been ‘rightly received’.

The RCN, like many other NHS staff unions, disagrees, and has been campaigning for its members to receive a one-year 12.5 per cent pay rise.