The medics in Alaska, United States, were treated immediately where they received their jab. 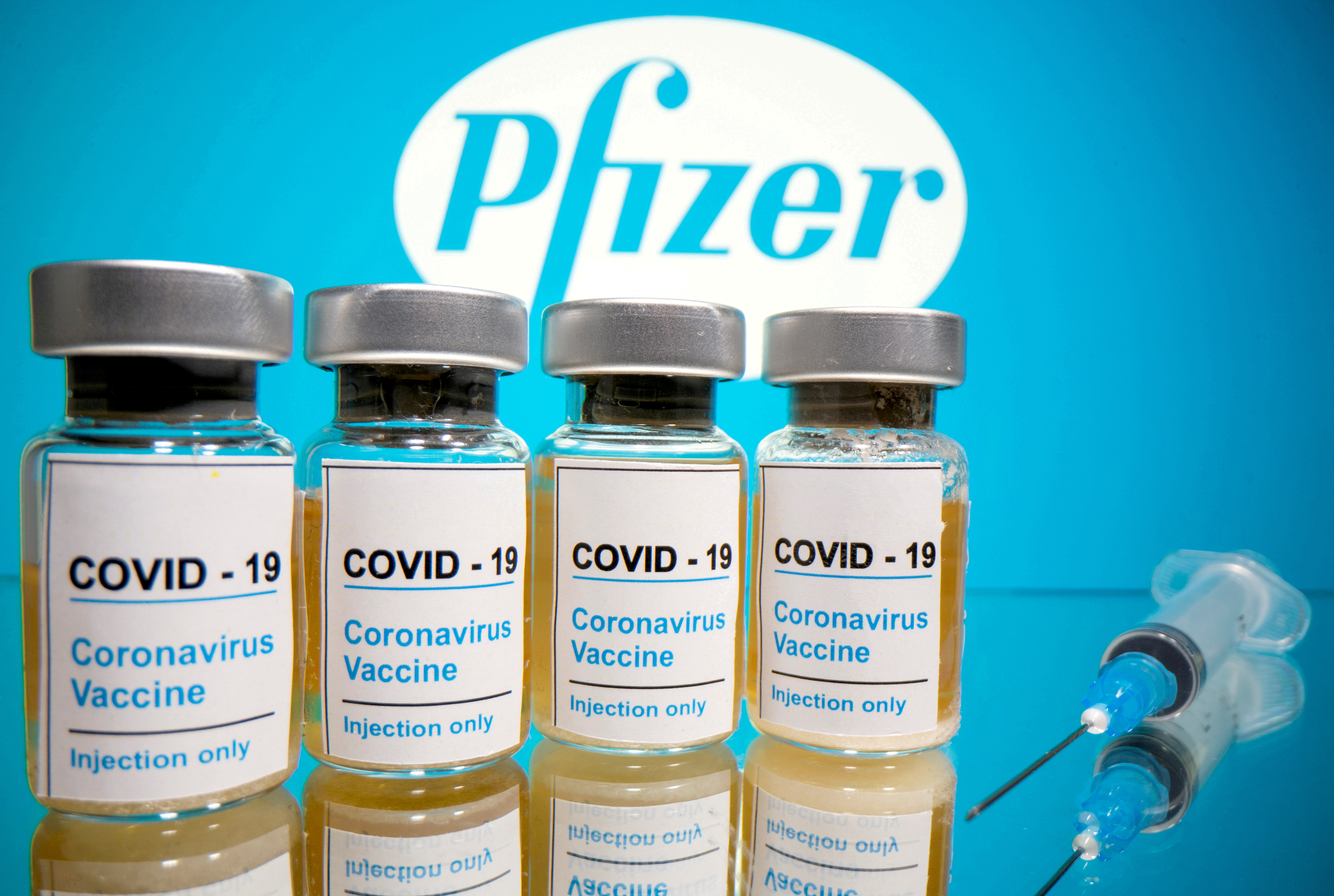 Both appear to have had no history of severe allergic reactions, suggesting they may not have been aware of existing allergies.

Pfizer has said it is "actively working with local health authorities to assess" the situation.

Prior to the vaccine roll-out in the US, the Food and Drug Administration (FDA) had advised people with allergies to consult with their doctors to make sure that they are not allergic to any of the component of the vaccine.

It follows UK regulators, the MHRA, to warn anyone with a history of "severe allergic reactions" to food, medicines or vaccines to refuse the jab.

Two NHS workers in the UK suffered an anaphylactic reaction to the vaccine last week, both of whom have recovered.

Anaphylaxis can be life-threatening, causing breathing difficulties, a fast heartbeat and confusion.

Symptoms usually occur within minutes or even seconds after exposure to a food or medicine, and so people who receive their jab are kept for around 15 minutes to ensure they are well.

Health officials have reassured events like these were not "unexpected" because the vaccine was new.

And Pfizer said the vaccine was "well tolerated" during the trials with "no serious safety concerns".

It has been trialled extensively on thousands of people worldwide and been declared safe and effective for use.

But regulators in the UK will be studying people given the jab over time to make sure other side effects don't appear.

Reactions came on within ten minutes

The first medic to suffer an allergic reaction was a middle-aged woman who was not aware she had allergies, the New York Times reports.

She had an anaphylactic reaction that began 10 minutes after receiving the vaccine at Bartlett Regional Hospital in Juneau on Tuesday.

A rash quickly spread across her face and torso, before her breathing and heart rate became rapid.

Doctors rushed her in to the emergency room where she was given a shot of epinephrine (adrenaline).

The woman, who has not been named, stabilised. But when doctors took her off medication, her symptoms would come back. 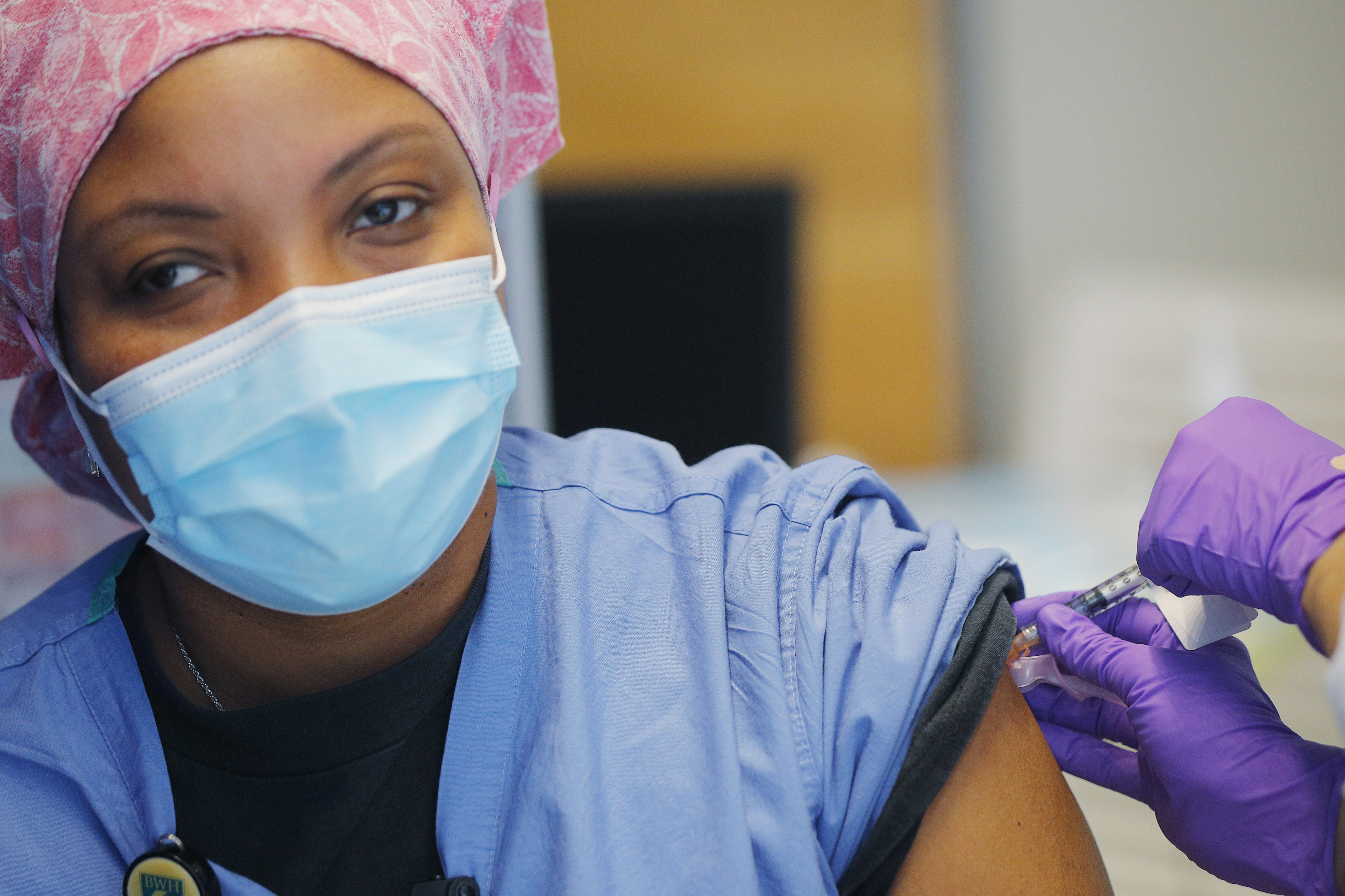 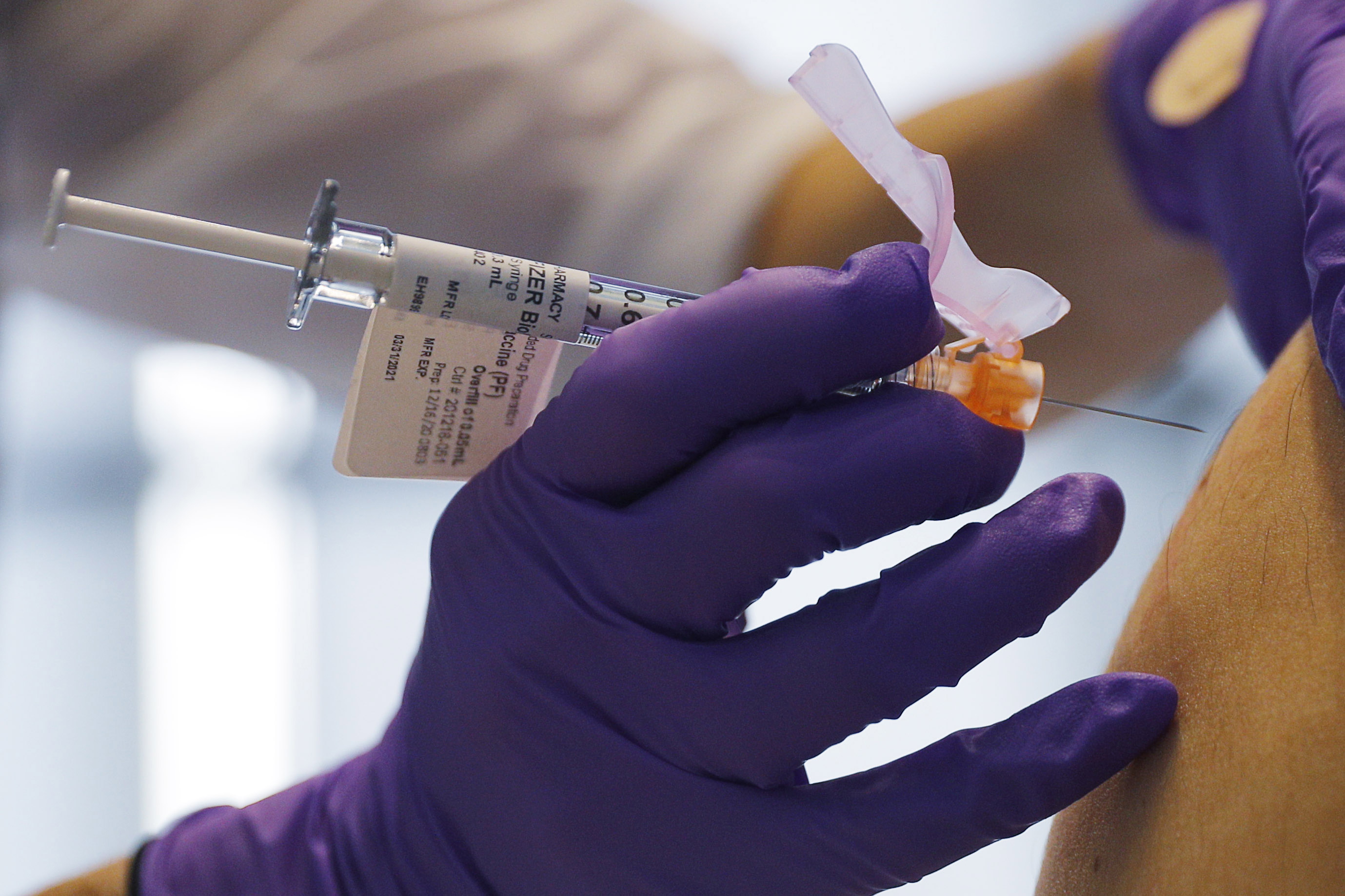 The NYT reports that the woman was moved to an intensive care unit where she was still staying on Wednesday night.

A man who received his Pfizer jab at the same hospital on Wednesday was the second worker to fall suddenly ill.

The man, whose age and name is unknown, developed eye puffiness, lightheadedness and a scratchy throat 10 minutes after the injection, according to a hospital statement.

He was also given epinephrine, among other drops, and was back to normal within an hour.

The workers were two of just 144 people given a vaccine dose that day.

But both bravely said they did not want their experiences to put others off getting the potentially life-saving inoculation.

Experts said the cases showed the hospital system was well equipped to spot any concerning symptoms in people once they had been given their jab.

But questions remain over what ingredient in the vaccine is triggering a response.

The Pfizer vaccine is genetic material, called mRNA, coated in a bubble of fat.

Dr Paul Offit, a vaccine expert and member of an outside advisory panel that recommended the FDA authorise the Pfizer vaccine, said the molecule protecting the genetic material is called polyethylene glycol.

It is considered a “leading contender” for triggering an allergic reaction, he said. But more tests are needed.

What’s in the Covid-19 vaccine? 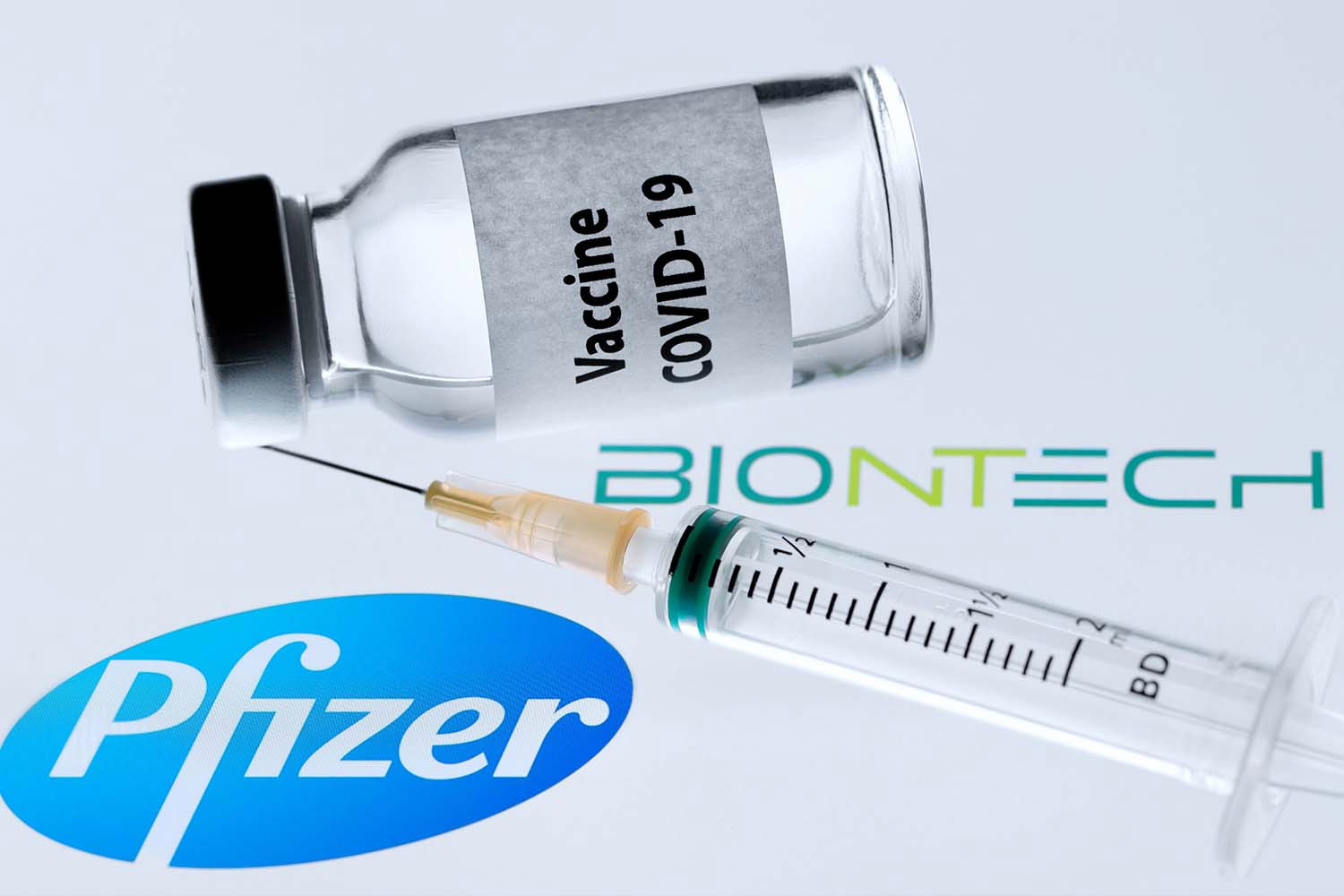 The ingredients are as following:

The messenger RNA (mRNA) is a critical part of the vaccine.

The Moderna vaccine – a leading contender with finished trials – is made in a similar way.

A Pfizer spokesperson told CNN: “We don't yet have all the details of the report from Alaska about a potential serious allergic reactions but are actively working with local health authorities to assess.

“We will closely monitor all reports suggestive of serious allergic reactions following vaccination and update labeling language if needed.

“The prescribing information has a clear warning/precaution that appropriate medical treatment and supervision should always be readily available in case of a rare anaphylactic event following the administration of the vaccine.”

Avoid vaccine if you have severe allergies

Health care providers were warned not to give the vaccine to anyone with a “known history of a severe allergic reaction” to any component of the vaccine, which they said was a standard warning for vaccines.

About 32 million Americans have food allergies, according to the Asthma and Allergy Foundation of America.

The Centers for Disease Control and Prevention said American people with serious allergies can be immunized as long as they are monitored for 30 minutes after getting the shot.

However, the FDA is requiring Pfizer to monitor for anaphylaxis in the US and submit data, The Times reported.

Britain’s medicine regulator earlier this month said anyone with a history of anaphylaxis to a medicine or food should not get the Pfizer Covid-19 vaccine.

The MHRA advice states: "Any person with a history of a significant allergic reaction to a vaccine, medicine or food (such as previous history of anaphylactoid reaction or those who have been advised to carry an adrenaline autoinjector) should not receive the Pfizer/BioNtech vaccine."

More than 200,000 people in the UK, including children, have severe allergies that require them to carry an EpiPen, according to the National Institute of Health and Clinical Excellence.

What is a common vaccine reaction?

According to the NHS, the most common side effects of vaccination are:

It's "rare" for anyone to have a serious allergic reaction to a vaccination, the NHS says.

If this does happen, it usually happens within minutes.

The person who vaccinates you or your child will be trained to deal with allergic reactions and treat them immediately. With prompt treatment, you will make a good recovery.

The Pfizer/BioNTech jab showed the following side effects in trials:

Like all vaccines, the new coronavirus vaccine can cause side effects, although not everybody gets them.

Very common (Likely to affect more than one in ten people)

Common (Likely to affect up to one in ten people)

Uncommon (May affect one in 100 people)

The NHS says all vaccines are thoroughly tested to make sure they will not harm you or your child.

It often takes many years for a vaccine to make it through the trials and tests it needs to pass for approval.

But scientists have been working at speed to develop a Covid jab in under one year.

This has been possible because of huge funding, global collaboration, and because there was high transmission of the virus globally to test it.

Experts have said "no corners have been cut" in testing Covid vaccines.

Once a vaccine is being used in the UK it's also monitored for any rare side effects by the Medicines and Healthcare products Regulatory Agency (MHRA).

The MHRA accounced on December 2 the Pfizer/BioNTech was safe and effective.

Both NHS workers who reacted to the Pfizer vaccine have a significant history of allergic reactions – to the extent where they need to carry an adrenaline pen with them, NHS England said.

Pfizer officials have said the two British people who had the reaction had a history of severe allergies.

Both carried EpiPen-like devices to inject themselves with epinephrine in case of such a reaction.

Pfizer has said that its vaccine does not contain egg ingredients.

The British update also said that a third patient had a “possible allergic reaction,” but did not describe it.

Professor Openshaw said there is a "very small chance" of an allergic reaction to a vaccine with all food and medication allergies.

"However, it is important that we put this risk in perspective," he said on December 9.

“The fact that we know so soon about these two allergic reactions and that the regulator has acted on this to issue precautionary advice shows that this monitoring system is working well.”

The US began rolling out its vaccine programme on December 14, with federal regulators issuing a broad authorisation for the vaccine on Friday December 11 to adults 16 years and older.

In a preliminary analysis of Pfizer's vaccine posted online last week, prior to FDA approval, a group of scientists said the jab was safe.

Among 20,000 volunteers, 137 given the shot had allergic reactions but so did 111 people who received the placebo.

This led researchers to dismiss the theory that the vaccine was a potential hazard.

Four people given the vaccine were diagnosed with Bell's Palsy, a type of facial paralysis.

However, trial scientists said there was no evidence the jab that caused the condition and that the figure was on par with the rate of Bell's Palsy in the general population.