Las Vegas, Nevada: Former president Barack Obama has warned that “more people are going to get hurt” due to the growing trend of political violence in America unless elected officials from all sides condemned the extremism and conspiracy theories fuelling the problem.

With one week until the midterm elections determine who controls Congress, Obama appeared in the critical battleground of Nevada on Tuesday night (US time), ramping up a last-minute campaign blitz across the country as embattled Democrats seek to fend off the threat of a Republican “red wave”. 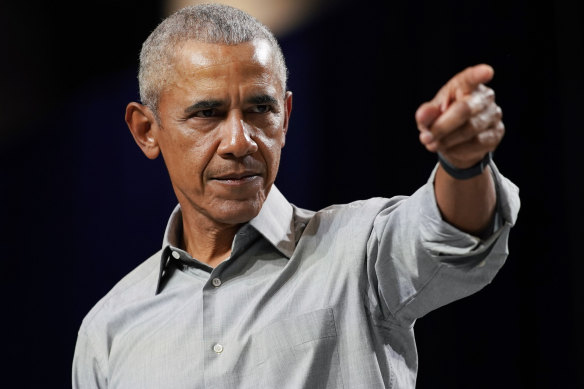 Barack Obama campaigns for Democratic candidates at a rally in Nevada on Wednesday. Credit:AP

Speaking to an enthusiastic audience in the northern suburbs of Las Vegas, Obama condemned the vicious attack on Speaker Nancy Pelosi’s husband last week; warned about the ongoing erosion of American democracy; and urged the party faithful to encourage undecided residents to vote.

He said that he had spoken to Paul Pelosi, who is still recovering after being clubbed with a hammer in his home by an overnight intruder searching for his wife – the second most powerful woman in the country after Vice President Kamala Harris.

“He’s going to be ok,” Obama said, but added: “One thing’s clear: this increasing habit of demonising political opponents creates a dangerous climate, and elected officials who do not explicitly reject, or participate in, over-the-top rhetoric … [will ensure that] more people are going to get hurt.”

Obama’s comments came as the man charged with breaking into the Pelosi home, 42-year-old David DePape, attended his first court appearance since Friday’s brutal assault with his arm in a sling – the consequence of a dislocated shoulder when he was arrested by police.

During the hearing, it was revealed that not only was DePape on the hunt for the speaker; but he was also on a “suicide mission”; filled with “political misinformation” and had planned to target more politicians.

The Nevada rally was the latest in a series of events Obama has headlined as Democrats become increasingly concerned that voter sentiment over record inflation rates, high fuel prices and the soaring cost of living pressures will result in the party losing its wafer thin Congressional majority at the November 8 midterms.

Such a loss would make it harder for President Joe Biden to deliver on his agenda for the next two years, and potentially pave the way for the return of Donald Trump, who has endorsed dozens of election-denying candidates across the country, and is expected to announce another run for the White House in 2024.

Nevada is seen as the Democrats’ most “at risk” Senate seat, with incumbent Senator Catherine Cortez Masto in a neck-and-neck race with Republican challenger, Adam Laxalt, a former attorney-general who supported Trump’s false claims that the 2020 presidential election was fraudulent. 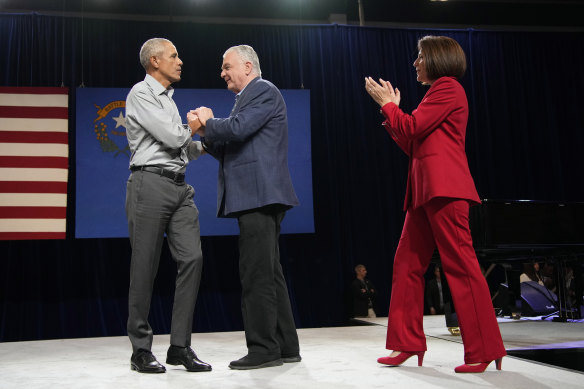 Another election denier, Jim Marchant, is also a chance to become Nevada’s secretary of state – the chief elections official, who effectively has the power to decide whether to reject or deny future results.

To that end, Obama warned, “democracy is on the ballot.”

Earlier, outside the Cheyenne High School where fans lined up for hours to see the former president, Democrat voters Terri Petrie, Lorraine Allers and Hjorgy Wagner were also concerned about the state of their country.

“I would like to see truth and civility among us, but I know that’s not going change overnight,” said Wagner.

Petrie agreed, telling The Age and The Sydney Morning Herald that one of her motivations to vote this year was “the future of democracy: the lies, and the conspiracy theories and all that crap.”

Next week’s midterms are set to be a nail-biter, with the Democrats widely tipped to lose their majority in the House of Representatives but may manage to narrowly retain control of the Senate – if they can win key seats such as Nevada, Pennsylvania, Georgia and Arizona.

Obama’s rally was the latest in a series of campaign stops the former president has made around the country as the race moves towards the Republicans, following on from similar events in Wisconsin, Michigan and Atlanta.