Jeremy Hunt today announced he would increase the windfall tax on oil and gas firms and extend it to power generation firms as he seeks to raise money to plug a major hole in the public finances.

The Chancellor said the levy would be increased to 35 per cent from its current rate of 25 per cent. It would also apply to electricity generators with a levy of 45 per cent being applied from January 1.

How are rising energy bills affecting you?

This means wind farms in UK waters will pay a higher windfall tax than the oil and gas rigs operating nearby.

Mr Hunt hopes the taxes can raise around £14billion for the Treasury between them next year.

‘I have no objection to windfall taxes if they are genuinely about windfall profits caused by unexpected increases in energy prices,’ he told the Commons today.

‘But any such tax should be temporary, not deter investment and recognise the cyclical nature of many energy businesses.’

He added: ‘The structure of our energy market also creates windfall profits for low-carbon electricity generation.’

Soaring oil and gas prices in the wake of Russia’s invasion of Ukraine have sent household energy bills to record highs, triggering Britain’s worst cost of living crisis in generations.

Today, Mr Hunt also announced an extra £6 billion of investment in energy efficiency from 2025 to help meet a new ambition of reducing energy consumption from buildings and industry by 15% by 2030. 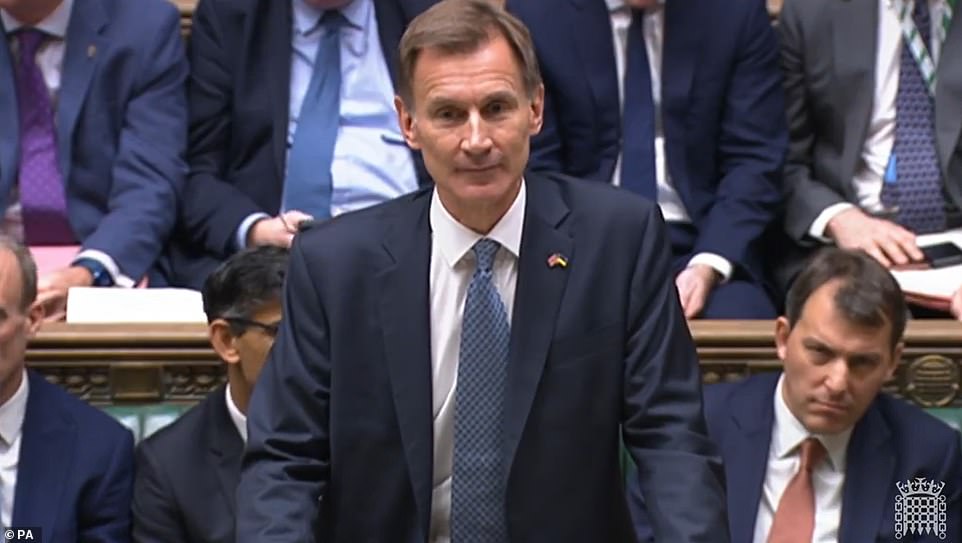 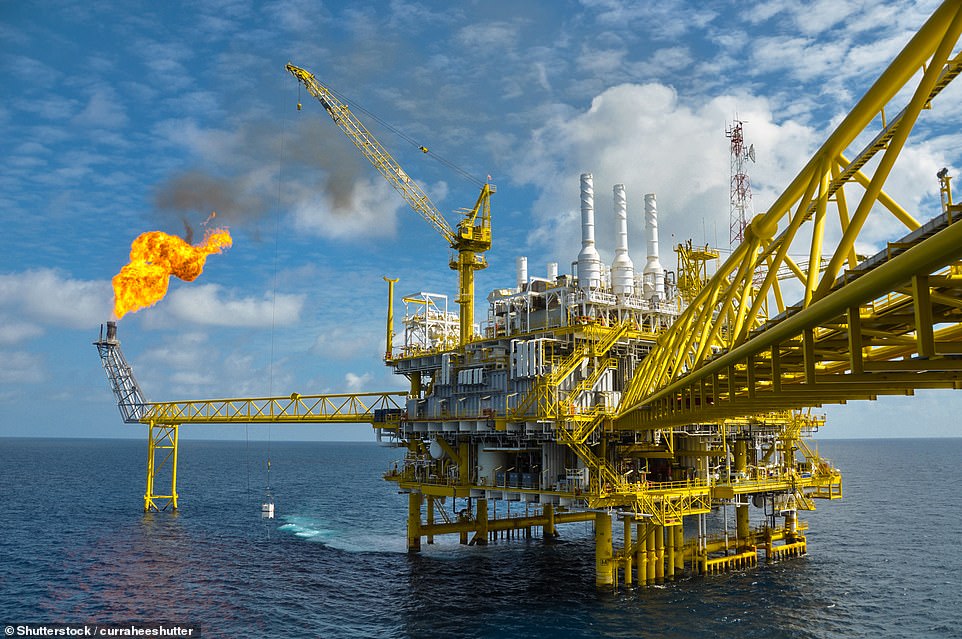 Many older wind farms and gas-firing power plants have been benefiting from historically high energy prices.

Gas prices have soared around the world, and the price of electricity in Britain is largely decided by how expensive gas is.

Most new wind farms across the UK are built under so-called Contracts for Difference – which gives them a guaranteed price for each unit of electricity they produce.

But these generators are also forced to pay back anything more that they get above that guaranteed price – they have, therefore, not gained any windfall profits from recent price rises.

Speculation about a potential windfall tax had sparked warnings from renewable energy companies that investment in the sector could dry up as a result.

‘But Putin’s weaponisation of international gas prices has helped drive up the cost of our national energy consumption.

‘This year we will be spending an extra £150 billion on energy compared to pre-pandemic levels, equivalent to paying for an entire second NHS through our energy bills.’

He added: ‘Over the long term, there is only one way to stop ourselves being at the mercy of international gas prices: energy independence combined with energy efficiency.

‘Energy independence, so neither Putin or anyone else can use energy to blackmail us, and energy efficiency to reduce demand and climate impact as much as possible.’ 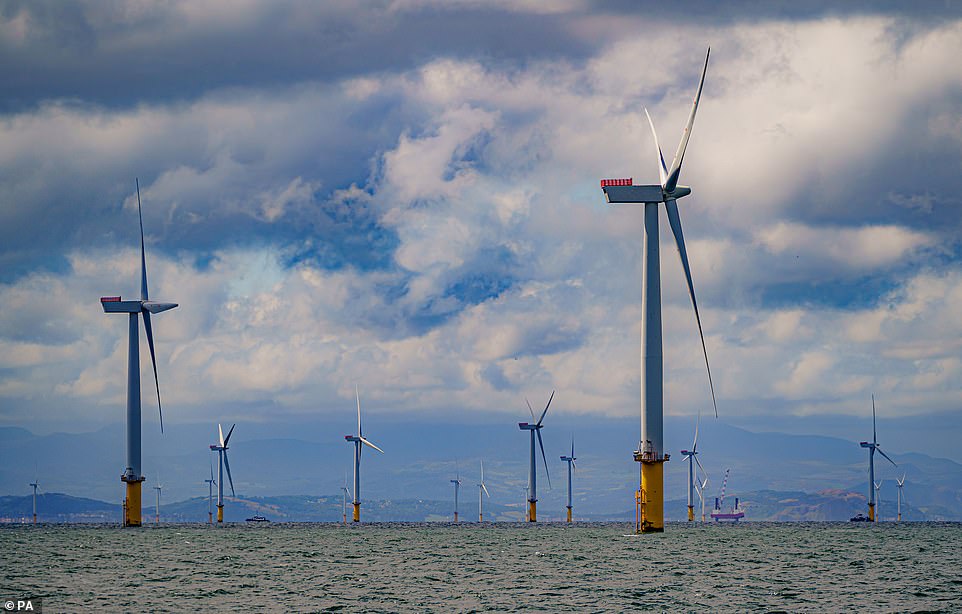 After Mr Hunt’s announcement, wind farms in UK waters will pay a higher windfall tax than the oil and gas rigs operating nearby

It comes as SSE became the latest energy giant to see its profits balloon with high electricity prices, while its gas generation arm made a killing.

The company said that its renewables arm had struggled to cash in on high electricity prices, but the adjusted operating profit at SSE Thermal – the part of the business that burns gas to generate electricity – nearly tripled to £100 million in the six months to the end of September.

Along with an even bigger boost for its gas storage arm, it helped push SSE’s overall operating profit to £716 million, close to double where it was last year.

On a call with reporters, SSE boss Alistair Phillips-Davies said that a windfall tax could be fair and reasonable, but must not put off investors.

‘In terms of levies, caps, windfall taxes, whatever that may be, if they’re fair and reasonable – fine,’ he said.

‘I think one of the things we’ve got to be careful of in the UK is that we’ve created an amazing environment in which investors can come in.

‘We’ve got one of the best green investment markets in the world, we’ve created the biggest offshore wind market in the world.

‘It’s critical that we don’t endanger that, particularly when all of that investment is going to be delivering energy throughout this decade at far, far lower costs than we’re currently importing.’

Adjusting operating profit actually dropped 11 per cent, reaching just £22.5 million as the business had to buy back some of its hedges at high prices. 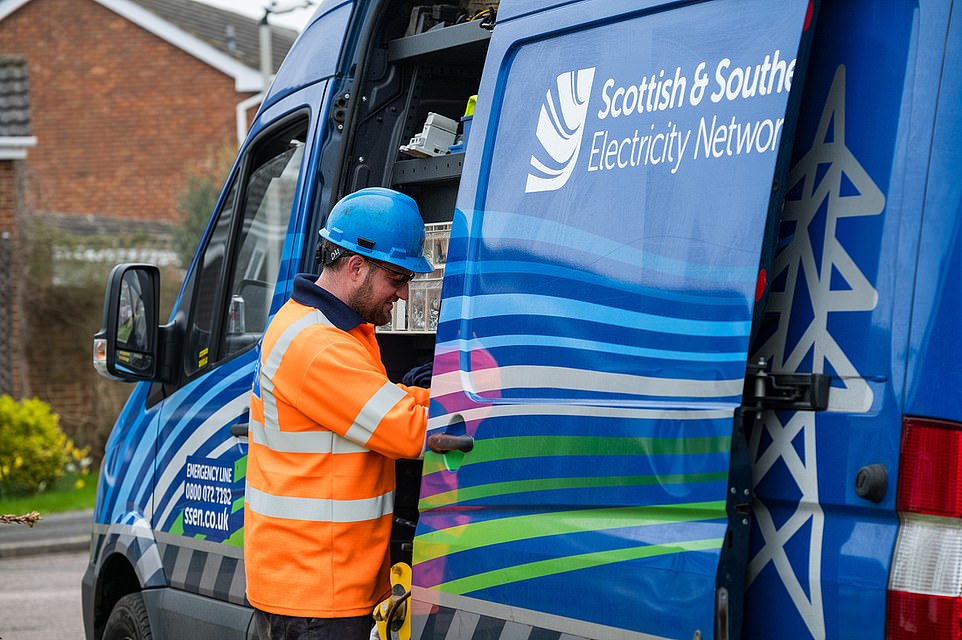 It came as SSE became the latest energy giant to see its profits balloon with high electricity prices, while its gas generation arm made a killing 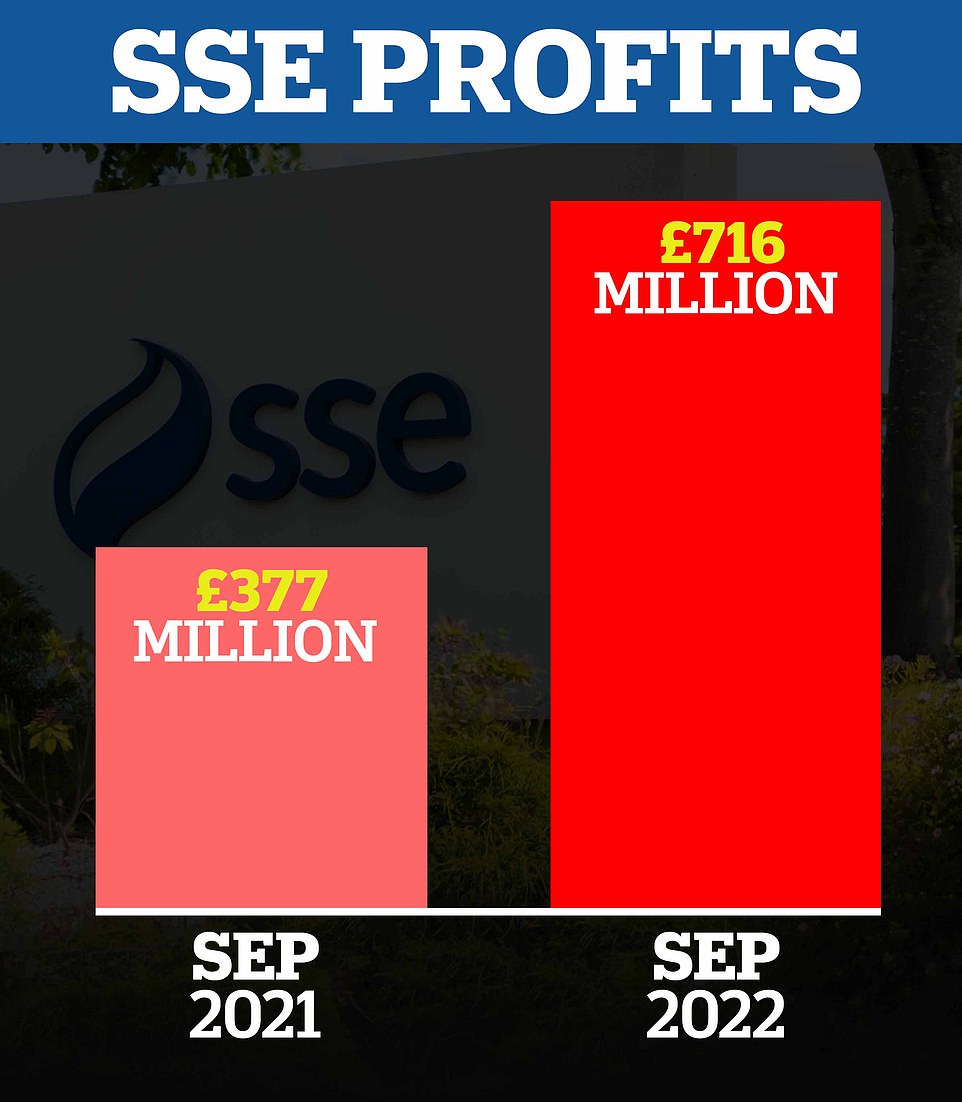 SSE’s overall operating profit has reached £716 million, close to double where it was last year