Home » World News » ‘One gun crime is too many’: New police unit cracks down on illegal firearms

A new police unit to stamp out illegal gun use by organised crime has already netted 80 firearms since its inception in September last year.

Victoria Police's illicit firearms unit is made up of 22 officers and has vowed to focus on disrupting firearm-related crime, including trafficking by "outlaw motorcycle gangs and Middle Eastern organised crime groups". 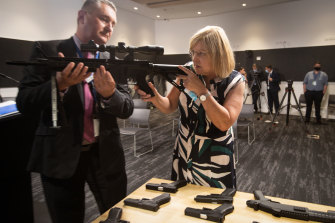 The unit is also able to forensically trace the seized weapons and link them to crimes committed in Victoria and across the country.

She said the new specialist unit was an Australian-first and would be dedicated to "tracking down and disrupting illicit firearms in our community".

"It's not just about the harm caused amongst criminal groups, but the use of these weapons that are used to cause more broader public harm," Ms Neville said. 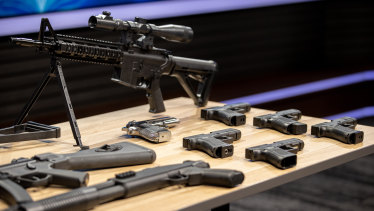 A range of illegal weapons displayed at the launch of the illicit firearms unit. Credit:Simon Schluter

She said the decision to establish the unit was made by Victoria Police after monitoring the illegal firearms market, nationally and internationally. The IFU has been operating for four months.

About 770 weapons have been seized by police in Victoria over the past year.

Victoria Police Acting Deputy Commissioner Robert Hill said nine people were killed in Victoria last year as a consequence of illegal gun use, but even "one gun crime is too many". 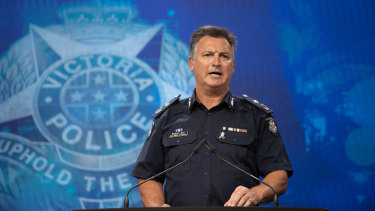 With the weapons featuring "strongly" in drug trafficking and homicides, Mr Hill said police were now looking for ways to prevent the offences from occurring in the first place.

"Those numbers are slightly lower than the year before … but demonstrate that the COVID-19 pandemic had little impact on organised crime groups and their involvement with illicit firearms," he said.

"Our investigators have traditionally had great success in resolving these matters post-event in terms of identifying perpetrators and placing them before the courts. But we know there is more to be done upstream.

"We've already seen as a consequence of this investment and this focus by investigators a significant seizure of firearms … this unit alone has seized more than 80 firearms."

Detective Inspector Mick Daly, who heads the new unit, said there had been an increase in the number of calls to triple zero about people spotted in public with guns.

In November, a Frankston man was charged with a number of offences, including possessing a traffickable quantity of unregistered firearms and being a prohibited person possessing a handgun.

The IFU said it seized 36 real and imitation firearms from the man, including a number of gel ball blasters, after it executed a warrant at a Frankston address.