One quarter of Russian units have been rendered 'combat ineffective'

More than a quarter of Russian units have been rendered ‘combat ineffective’ in Ukraine and their ‘most elite units’ are the worst affected, MoD says

Russia has lost a quarter of its combat forces deployed in Ukraine since the beginning of the invasion according the UK’s Defence Intelligence agency.

According to intelligence experts, Russia committed more than 120 battalion tactical groups, some 65 per cent of their entire ground combat strength.

Losses among Russia’s elite units such as their VDV airborne forces are likely to have suffered greater loses and will ‘probably take years’ to replenish these forces. 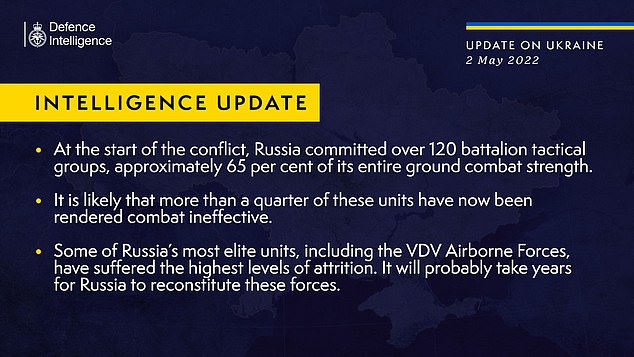 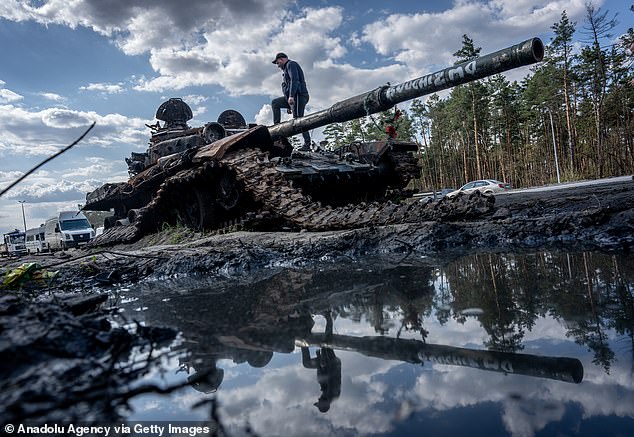 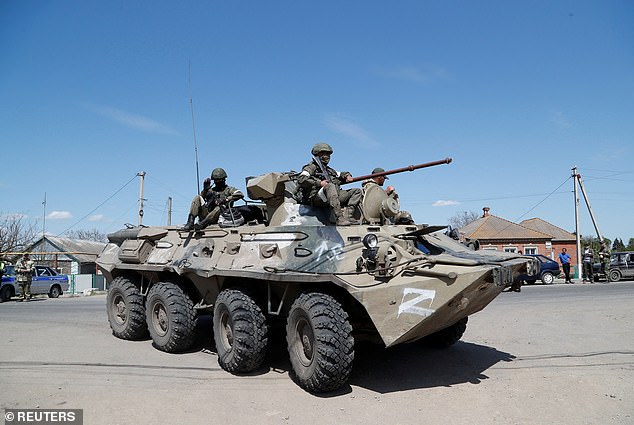 According to the update: ‘At the start of the conflict, Russia committed over 120 battalion tactical groups, approximately 65 per cent of its entire ground combat strength.

‘It is likely that more than a quarter of these units have now been rendered combat ineffective.

‘Some of Russia’s most elite units, including VDV airborne Forces, have suffered the highest levels of attrition. It will probalby take years for Russia to reconstitute these forces.’

In his nightly address on Sunday, Volodymyr Zelensky accused Moscow of waging ‘a war of extermination’, saying Russian shelling had hit food, grain and fertiliser warehouses, and residential neighbourhoods in the city of Kharkiv, in the Donbas and other regions.

After failing to capture Kyiv in the opening weeks of the war, Russian forces have embarked on a major military operation to seize the Donbas, Ukraine’s eastern industrial heartland where Moscow-backed separatists have been battling Ukrainian forces since 2014.

The Russian Defence Ministry said its forces struck dozens of military targets in eastern Ukraine in the past 24 hours, including concentrations of troops and weapons and an ammunition depot near Chervone in the Zaporizhzhia region.

The information could not be independently verified.

The Ukrainian president’s office said at least three people were killed and another three, including a child, were wounded in the eastern Luhansk region over the last 24 hours.

It said that four people were wounded in the shelling in Donetsk, another eastern region.

The regional administration in the Zaporizhzhia region farther west said that at least two people died and another four were wounded in the Russian shelling of the town of Orikhiv.

A full picture of the battle unfolding in eastern Ukraine is hard to capture. 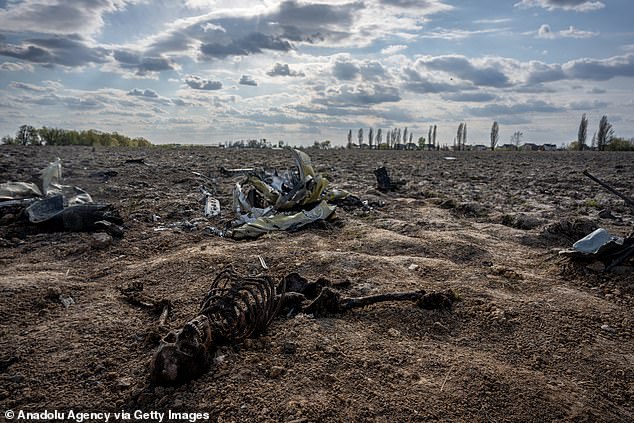 After failing to capture Kyiv in the opening weeks of the war, Russian forces have embarked on a major military operation to seize the Donbas, Ukraine’s eastern industrial heartland where Moscow-backed separatists have been battling Ukrainian forces since 2014

The fighting makes it dangerous for reporters to move around, and both sides have introduced tight restrictions on reporting from the combat zone.

Western officials say Russia is advancing slowly in its eastern offensive and has captured some villages, but is inflicting heavy civilian casualties through indiscriminate bombing.

Drone footage posted online showed what the Ukrainians described as two Russian Raptor boats exploding after being struck by missiles.

Hundreds of millions of pounds in military assistance has flowed into Ukraine during the war, but Russia’s vast armouries mean Ukraine still needs massive support.

Mr Zelensky has appealed to the West for more weapons, and tougher economic sanctions on Russia.

US House Speaker Nancy Pelosi and other US legislators visited Mr Zelensky on Saturday to show American support.

European Union energy ministers were meeting on Monday to discuss a new set of sanctions, which could include restrictions on Russian oil – though Russia-dependent members of the 27-nation bloc including Hungary and Slovakia are wary of taking tough action.