It was former British prime minister Winston Churchill who proclaimed that “no one pretends democracy is perfect” but, in essence, it’s the best system of government we have. Some of its grubbier imperfections were on display this week when the former factional heavyweight and Labor minister Adem Somyurek spent four days being grilled by the state’s anti-corruption commission.

For anyone interested in the welfare of democracy in Victoria, it was a bracing affair. The investigation into “allegations of serious corrupt conduct”, run jointly by the Victorian Independent Broad-based Anti-corruption Commission and the Victorian Ombudsman, put on full public display the sordid mechanics of branch stacking and the flagrant use of taxpayer money (in the form of ministerial or electorate office staff time) to perform party political work. 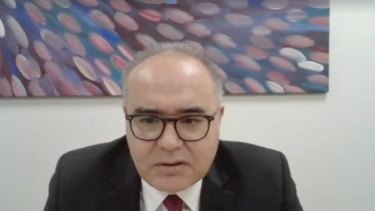 While Mr Somyurek spent much of his time in the witness stand trying to rationalise, justify, contextualise and pass blame, even he had to admit that he had been involved in corruption and had “lost all perspective” in his fight for internal power. But Mr Somyurek was also adamant that branch stacking had been business as usual in the Labor Party for decades.

That is no surprise to The Age. This newspaper has been revealing the widespread use of branch stacking for many years, detailing again and again the backroom operations to procure and pay for party members in the bid to accumulate power. Long-time electorate officer Kirsten Psaila, for example, who we exposed 15 years ago working for notorious branch-stacker George Seitz, was in IBAC last week, still allegedly forging signatures and taking $60,000 from her new employer, Marlene Kairouz, to pay for party memberships.

Asked by the counsel assisting whether her latest boss had been part of a “corrosive and corruptive” machinery of power, Ms Psaila said, wearily, “they all have”.

As a discussion paper published in August last year by Labor Party elders Steve Bracks and Jenny Macklin candidly admitted: “Since the 1990s, there has been multiple inquiries into the scourge of branch stacking and attempts at reform. But stacking has continued.” The two party elders were appointed administrators of the Victorian branch after the Somyurek revelations, and a year ago made a series of recommendations, part of another attempt to end the practice.

The fact is people like Ms Psaila are bit players just trying to make a living. The real rogues are the politicians. And among them, Mr Somyurek is hardly a lone operator. These practices were learnt at the knees of his mentors and are deeply entrenched in the culture of all factions of the Labor Party. As recent reporting has made evident, the Liberal Party is also up to its neck in it.

Which raises the question: if it’s so rampant, is there any real possibility of stamping it out?

The key problem here is that politicians do not see it in their interests to take on the system that nourished their candidacy, and could as easily turn against them and remove their preselection. So by bipartisan agreement, the laws governing parties’ behaviour are weak and easily circumvented. But this taints even good candidates, and good electorate officers, who are forced to work within a rotten system. How appalling that a passionate young party member’s first introduction to politics through an electorate job would be a requirement by your boss to act corruptly.

The police, as has been forcefully demonstrated by their refusal to act decisively over the “red shirts” affair, seem unwilling to lay criminal charges, such as fraud, against politicians. Which leaves a strong media and, more recently, an anti-corruption commission empowered to tap phones and hold public hearings.

But we believe more must be done. The law must be changed to criminalise doing party work on the taxpayer dime, with penalties and enforcement robust enough to deter it. And police must find their courage to act when wrongdoing can be proved. If these hearings into Adem Somyurek’s blighted Labor empire are not enough to prove that, then nothing will be.