South Bend: The US parents of a toddler who fell to her death out of an open cruise ship window in Puerto Rico filed a lawsuit Wednesday against Royal Caribbean Cruises, accusing the company of negligence by allowing the window to be opened. 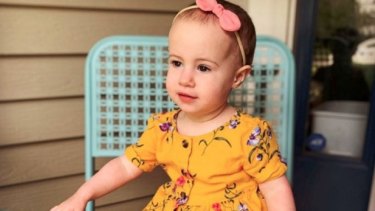 Chloe Wiegand fell to her death in July after her grandfather lifted her to the window on Royal Caribbean's Freedom of the Seas ship while the vessel docked. She would have turned 2 this week.

"We should be celebrating with presents and a birthday cake, but instead we are talking about her death," Chloe's mother, Kim Wiegand of Granger, Indiana, told reporters at a news conference in nearby South Bend.

She said she spends time with her daughter's urn every night.

Chloe's grandfather, Salvatore Anello, has been charged in Puerto Rico with negligent homicide. He insists he's colourblind and didn't know the 11th floor window in the children's play area was open. 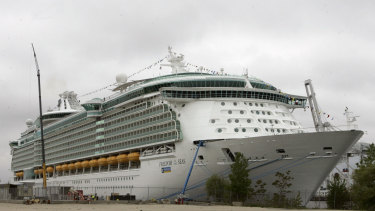 The Freedom of the Seas cruise ship.Credit:AP

He said he believed he was lifting Chloe so that she could bang on the glass like at a hockey game.

The lawsuit says the company violated industry standards by failing to provide reasonably safe windows in an area where children play on the ship.

The wrongful death lawsuit was filed in US District Court in Miami. It seeks an unspecified financial award. A Royal Caribbean spokesman said the company had no comment on the lawsuit.

"We all sit here broken," Anello said Wednesday. "But our family is strong and we will stay strong together."

Anello is due in a Puerto Rico court on December 17.

Royal Caribbean Cruises owns Ovation of the Seas, the cruise ship whose passengers were killed in a volcanic eruption at White Island in New Zealand on Monday.