Patsy Mink, first woman of color in Congress, to be honored with portrait at U.S. Capitol

WASHINGTON – In recognition of the history-making work of the late Rep. Patsy Mink, who 50 years ago fought against sexual discrimination in education and sports, House leaders will unveil a portrait of the Hawaii congresswoman later this month in the U.S. Capitol.

“We have pushed for this so that everybody who walks down the halls of the Capitol can see that an Asian American woman was a prominent leader who influenced this country to be better,” Rep. Judy Chu, chairwoman of the Congressional Asian Pacific American Caucus, told USA TODAY.

Mink was the first woman of color in Congress and the first Asian American woman elected to Congress. The Democrat who served for decades in the House championed Title IX, which bans sex discrimination in education, including sports, in federally funded programs. She is also credited with advocating for women’s rights and social justice issues.

The unveiling of Mink’s portrait spearheaded by House Speaker Nancy Pelosi, D-Calif., is scheduled for June 23.

“It’s just so important to showcase figures like her,’’ said Jean Sinzdak, associate director of the Center for American Women and Politics, Eagleton Institute of Politics at Rutgers University. “It’s important to showcase the Asian American leaders that have played a vital role in our country’s culture and policymaking.’’

The 19th Amendment was ratified 100 years ago: These 10 women changed politics since 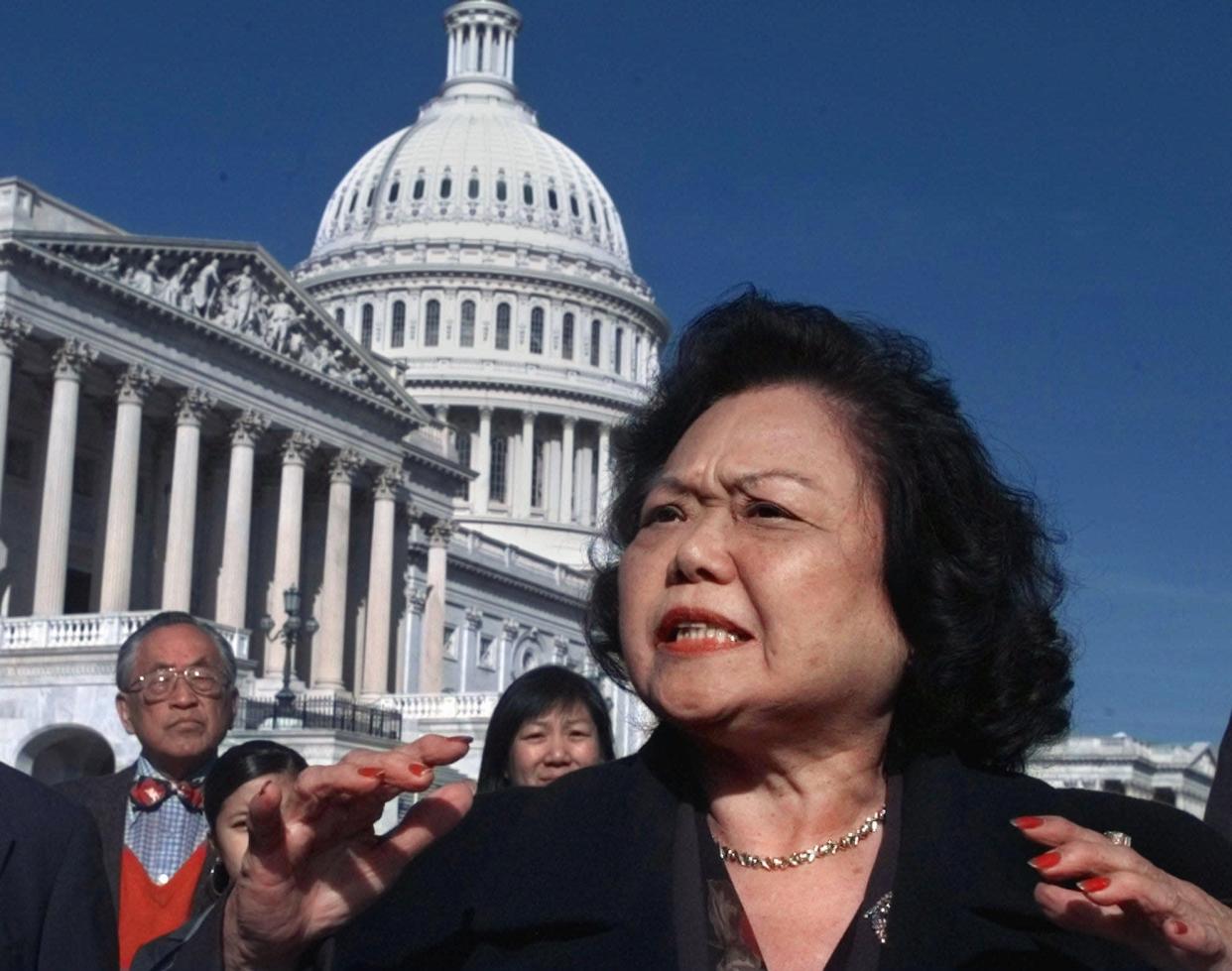 Mink broke barriers when she was elected to Congress in 1965. She was one of 12 women, including 10 in the House and two in the Senate.

She was one of 13 women in Congress when Title IX was passed in 1972. Today there are 145 women. Of those, 10 identify as Asian American Pacific Islander, according to the Center for American Women and Politics. (Upon the swearing in of Connie Conway, a Republican who won a special election Tuesday in California, the number of women in Congress will increase to a record 146.)

Like other women in Congress, Mink brought her lived experiences, said Sinzdak. Many cited the value of their experiences as women when it came to policy-making, the center’s research found.

Sinzdak noted that Mink faced discrimination when she applied to medical school and was rejected. She later turned to law. Mink must have faced major challenges in the white, male-dominated Congress, said Sinzdak.

“She just is such a clear-cut example of why representation and diversity is really important because everyone brings their own distinct life experience to it,’’ she said.

One of Mink’s signature works was Title IX, which she co-authored with Oregon Rep. Edith Green and Indiana Sen. Birch Bay. Among other things, Mink advocated for affordable child care, child development and bilingual education issues.

She also served as chair of the Congressional Asian Pacific American Caucus.

Mink was awarded the Presidential Medal of Freedom posthumously in 2014 by President Barack Obama.

“Every girl in Little League, every woman playing college sports and every parent, including Michelle and myself, who watches their daughter on a field or in the classroom, is forever grateful to the late Patsy Takemoto Mink,’’ said Obama, who said Mink was his congresswoman for years. 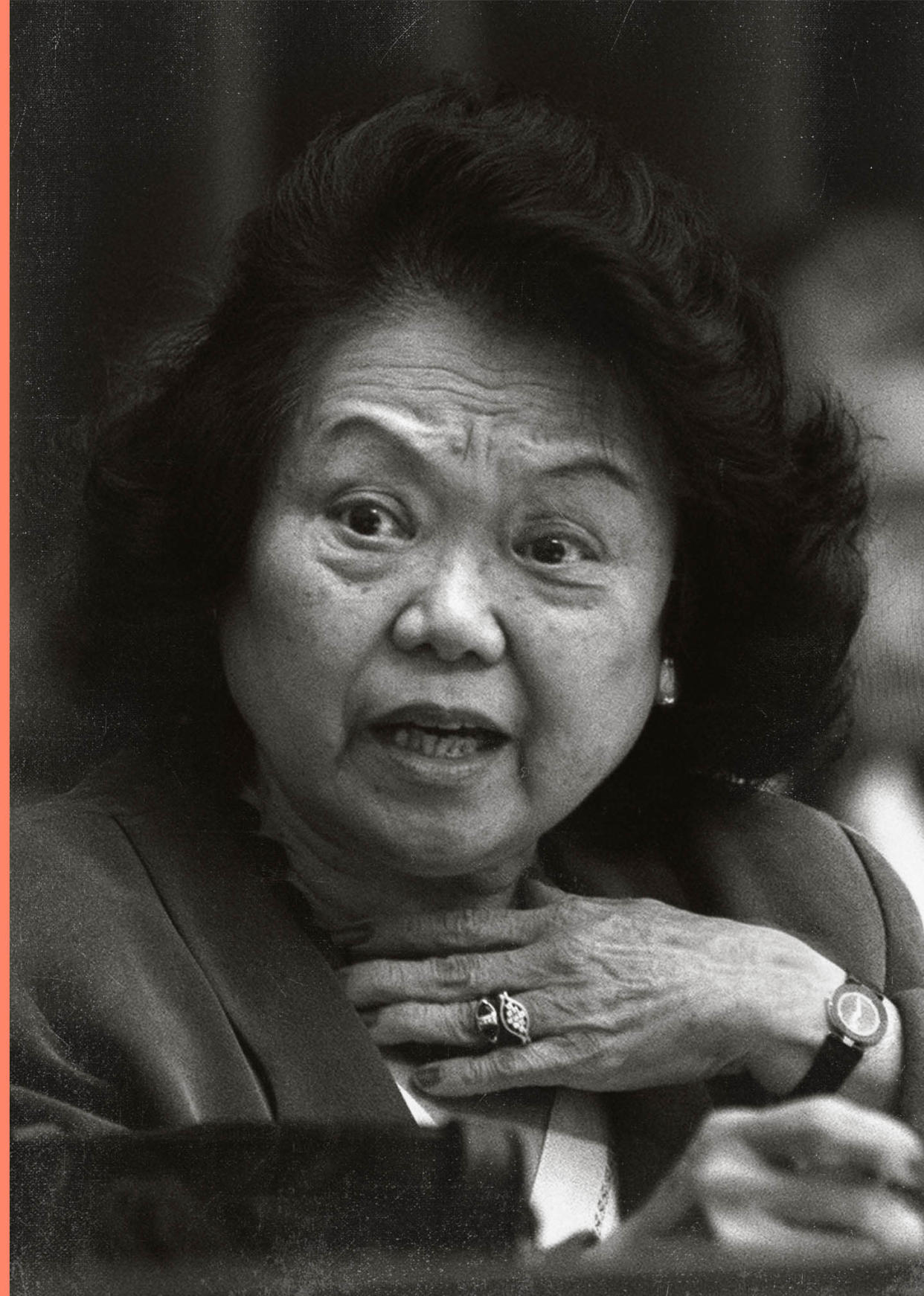 Honoring lawmakers who made history

The Mink portrait is part of a series that recognizes members of Congress who made history.

A portrait of the late New York Rep. Shirley Chisholm hangs on a wall on the first floor of the Capitol. Chisholm was the first Black woman elected to Congress in 1968.

Chu said the idea for Mink’s portrait came from seeing the one of Chisholm.

Earlier this year, House Majority Whip Rep. James Clyburn, D-S.C., held a ceremony to celebrate the naming of “The Joseph H. Rainey Room.’’ Rainey, who was from South Carolina, was the first African American in the House in 1870. 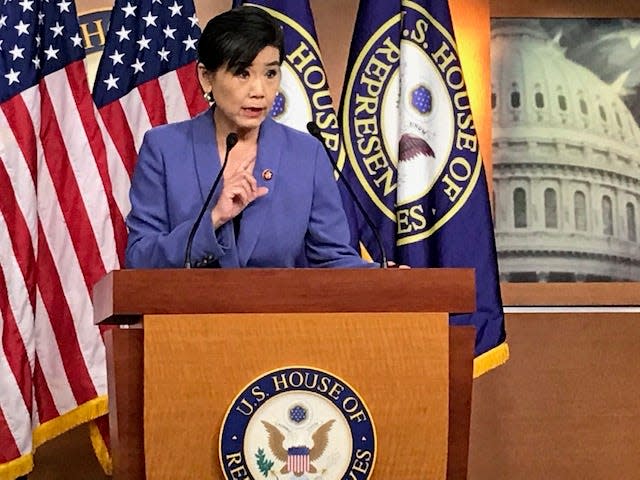 While it’s not clear yet where Mink’s portrait will be displayed, Chu and Sinzdak said tourists should be able to walk by and see it.

“It’s inspirational. It’s really important. It’s necessary because in a lot of cases our history books are just full of older white men,’’ said Sinzdak, adding that women’s accomplishments aren’t always recognized. “It’s an important moment for so many reasons politically and culturally to highlight Asian American leaders and the impact that they’ve had and their accomplishments and in this era.”

WILL PASSING LAWS HELP? Congress urged to address hate crimes, but ‘hate is a hell of a motivator.’

The unveiling of Mink’s portrait comes when there has been a spike in anti-Asian hate incidents and crimes.

Chu said the portrait and a proposal to build a national museum of Asian Pacific American history and culture might help people better appreciate the contributions of Asian Americans. Pelosi held a bill signing ceremony for the museum Tuesday, sending the measure to President Joe Biden for approval.

Caucus members are also pushing to include more Asian American history in schools.

‘‘That’s why are we pushing for all these things like the museum study, the curriculum, and this portrait of Patsy Mink,” said Chu. “It’s to change people’s perceptions for the better.”

The portrait can be impactful, said Sinzdak.

“It’s the visuals that really capture people and draw them into the story,’’ she said. “That’s what’s so important about having someone like Patsy Mink represented. Having her face literally on the hallway walls it’s just so important and it will be important for generations to come to see her there.”

This article originally appeared on USA TODAY: Pasty Mink, first woman of color in Congress, honored at US Capitol