Hero PC Andrew Harper’s family have arrived at the Old Bailey for today’s sentencing of his three teenager killers after they were cleared of murder but convicted of manslaughter.

His widow, Lissie Harper, who had only been married to the 28-year-old for four weeks before his death on August 15 last year, was among those seen arriving at court this morning by car.

PC Harper had tried to stop the three thieves from stealing a quad bike in Sulhamstead, Berkshire, but his ankles were lassoed by a trailing loading strap from their car as the teenagers tried to escape.

He was towed helplessly for over a mile behind the Seat Toledo as it reached speeds of 60mph.

Henry Long, 19, and 18-year-olds Jessie Cole and Albert Bowers, who were listening via video link from HMP Belmarsh, reacted to the news with hugs and pats on the back.

Judge Mr Justice Edis began the sentencing hearing by addressing the court about claims the killers had tried to itimidate the jury.

The judge said: ‘It may be believed in some quarters the jury were subject to some improper pressure. To the best of my knowledge and in my belief there is no truth in that at all.’

Mr Justice Edis said he had avoided reading reports about the case but had been informed that special measures had been taken to protect the jury. 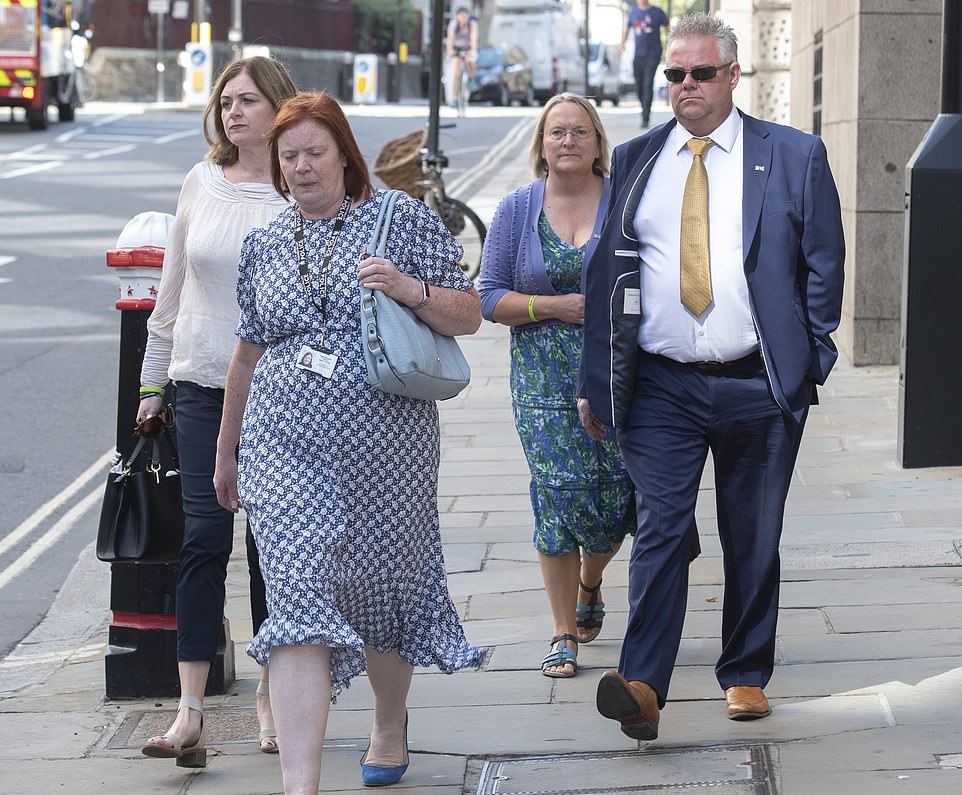 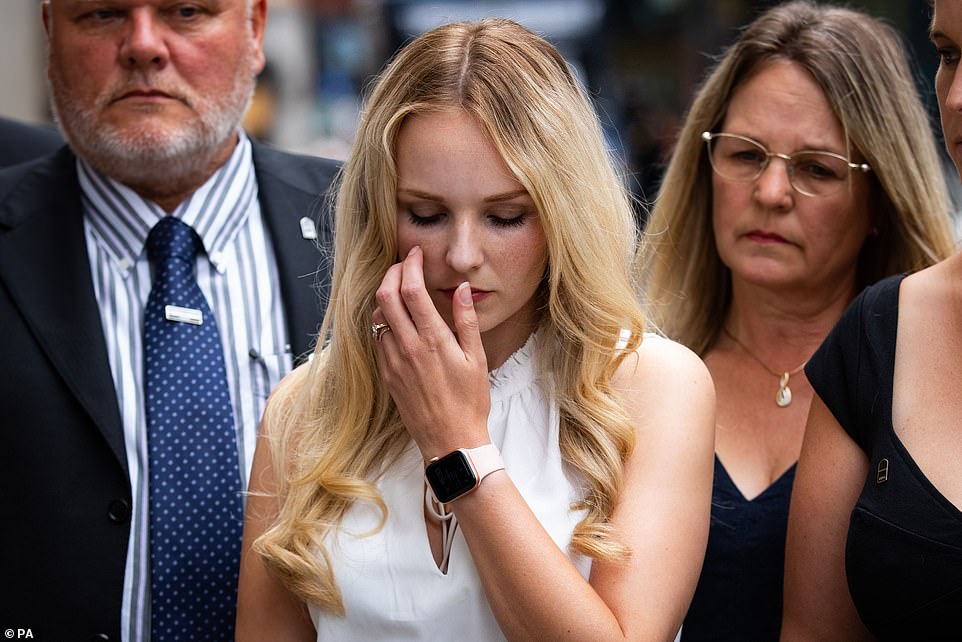 Lissie, the widow of PC Harper, is pictured outside the Old Bailey in central London on Friday

Police mugshots of (left to right), driver Henry Long, 19, and his passengers Jessie Cole and Albert Bowers, both 18

Mrs Adlam said she was ‘utterly and bitterly disgusted with the outcome’, which she said had ‘let down’ PC Harper

The decision to clear Long, Cole and Bowers of murder sparked fury from PC Harper’s family.

His widow, Lissie Harper, said: ‘I now have my own life sentence to bear and believe me when I say it will be a lot more painful, soul destroying and painful journey than anyone facing a meagre number of years in prison will experience.’

She later the Government to intervene, despite a retrial being both extremely unusual and unlikely.

In an open letter posted on her Facebook page on Tuesday evening, Mrs Harper wrote to Boris Johnson, Home Secretary Priti Patel and former Labour Home Secretary Lord (David) Blunkett urging them and others ‘to right such a despicable wrong for our country’.

She wrote: ‘I implore you to hear my words, see the facts that are laid out before us, and I ask with no expectations other than hope that you might help me to make these changes be considered, to ensure that Andrew is given the retrial that he unquestionably deserves and to see that the justice system in our country is the solid ethical foundation that it rightly should be. Not the joke that so many of us now view it to be.’

Her anger was shared by PC Harper’s mother, Debbie Adlam, who wrote: ‘Andrew James Harper is my son. I am disgusted that he has been let down.

‘When they crossed the junction on A4 there’s no way they did not know he was there being thrown against the pavements.

‘Utterly and bitterly disgusted with the outcome. Andrew went to work to serve us all. And this is how he was repaid.’ 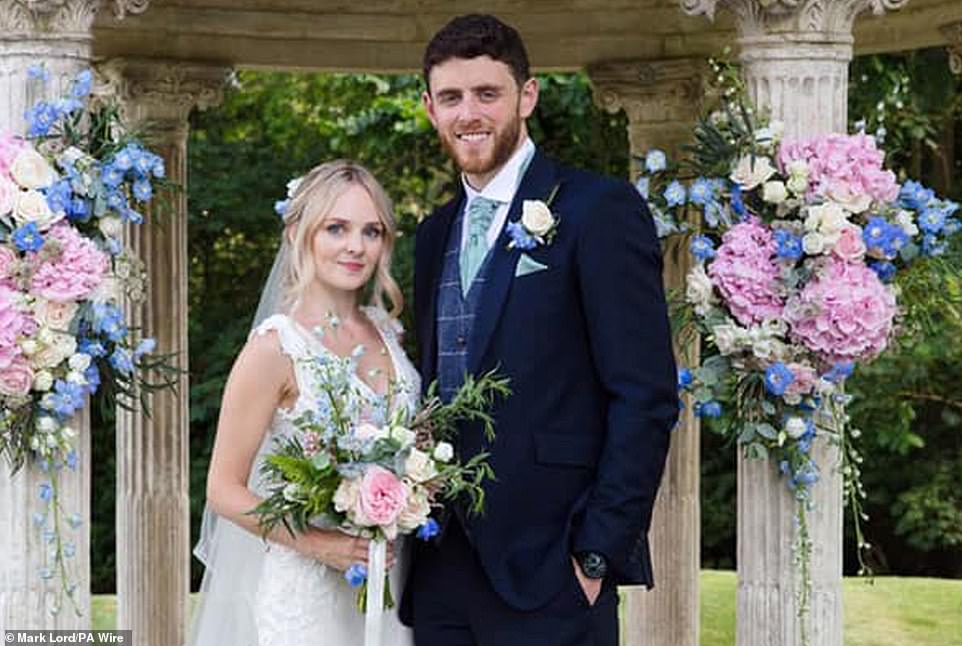 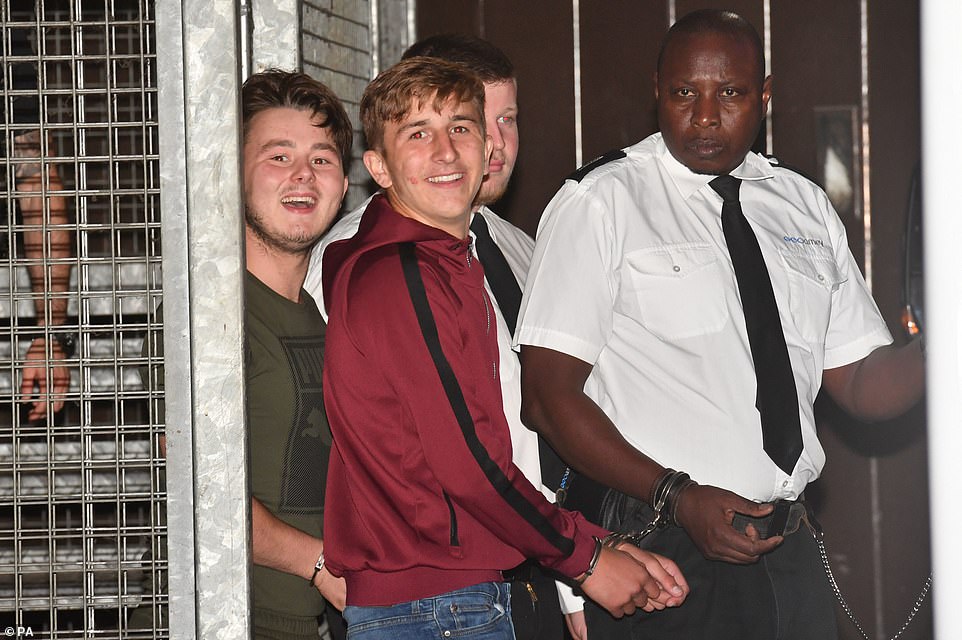 It is almost exactly a year since PC Harper and his colleague Pc Andrew Shaw responded to a report of a stolen quad bike from a property in Stanford Dingley, Berkshire, on the night of August 15 2019. It was four hours after his shift was due to finish, though the pair were in the area so wanted to help.

They soon came nose-to-nose with the thieves towing the £10,000 Honda quadbike in Admoor Lane, prompting PC Harper to get out of the police car and chase Cole, who had unhooked the rope between the Seat Toledo getaway vehicle and the stolen Honda.

Cole dived into the Seat, past PC Harper’s grasp, prompting Long to make off at speeds of 42.5mph, carrying the stricken policeman behind for 91 seconds.

His uniform was stripped away and he was found by colleagues unconscious and barely alive in Ufton Lane near the A4 moments later.

Despite attempts to save him, he died at the scene. 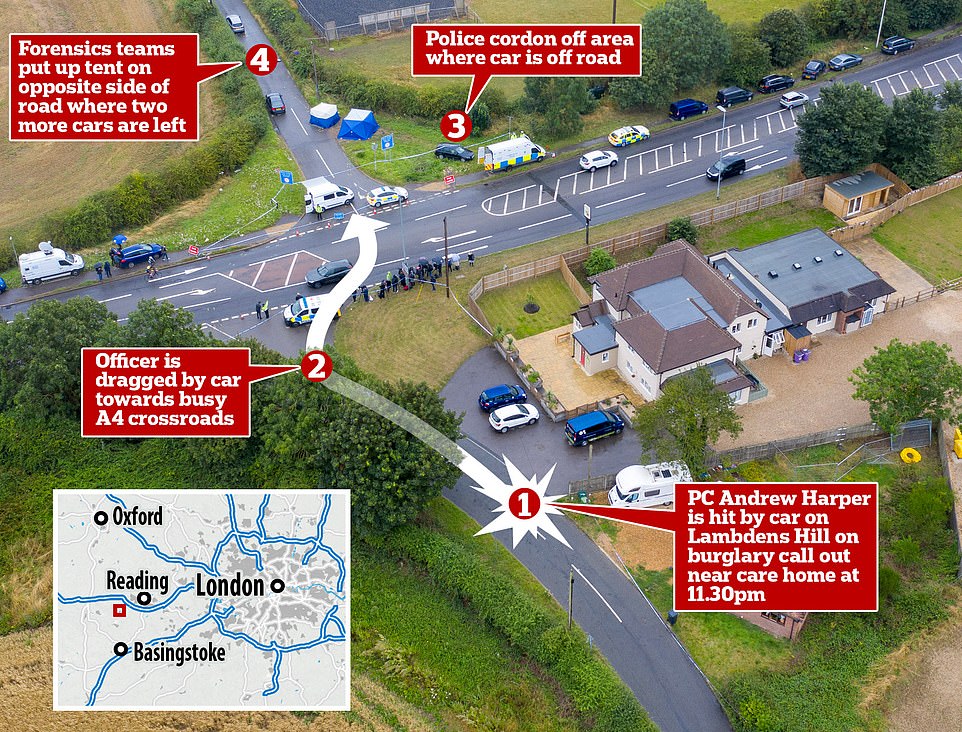 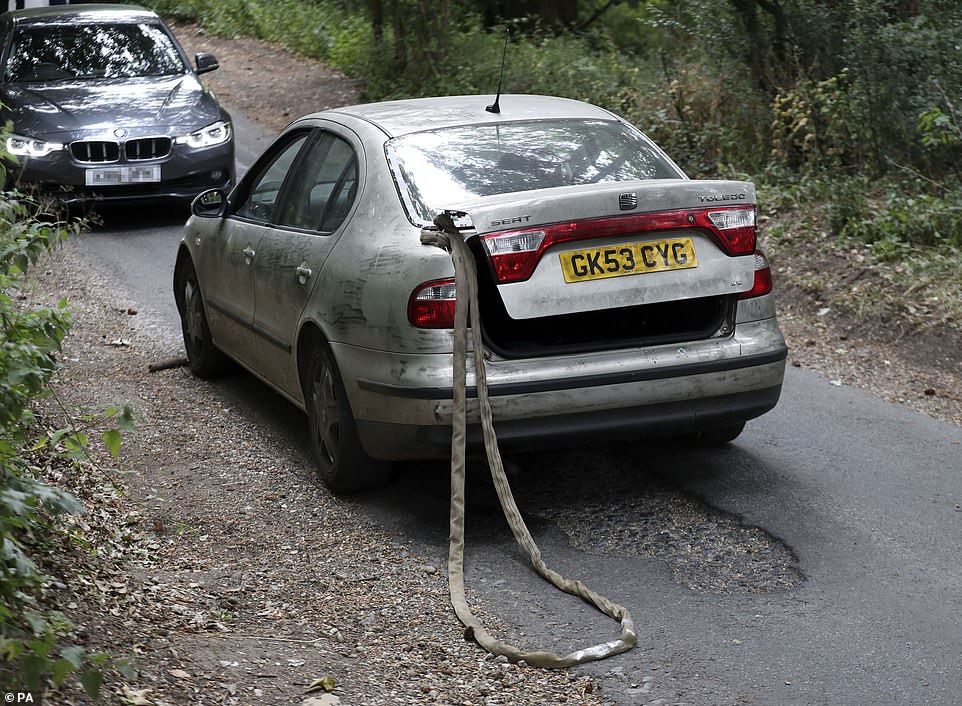 The getaway vehicle was later tracked to the nearby Four Houses Corner caravan site.

Following his arrest, Long – who later admitted manslaughter – concocted a false alibi that he had been watching the racing film Fast And Furious at the time.

But an examination of mobile phone data eventually placed all the defendants – members of the travelling community – in the Seat.

Their defence claimed the incident was a ‘freak event’ that none of them could have planned or foreseen.

But the prosecution said at more than 6ft and weighing 14 stone, the defendants must have been aware PC Harper was being dragged to his death.

A fourth defendant, Thomas King, 21, from Basingstoke, had admitted conspiracy to steal a quad bike and is also due to be sentenced at the Old Bailey, before Mr Justice Edis. 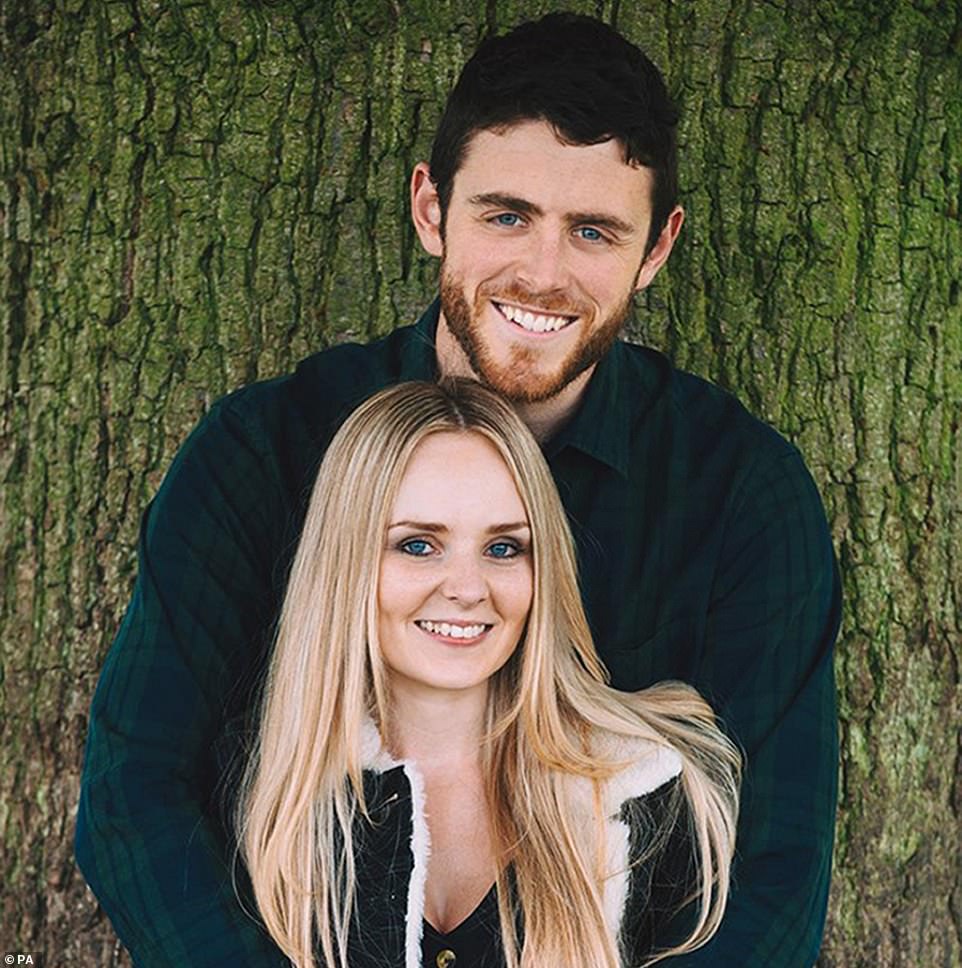 ‘Dear Boris Johnson, Priti Patel, David Blunkett and any other person in which has the power, moral value and sheer strength of character to right such a despicable wrong for our country…

‘The way in which the trial was conducted, the suspected interference with the jury and the manner in which the defendants behaved was a total disregard for any legal justice system.

‘If there is even the slightest chance this abominable injustice can be rectified then I will do everything I possibly can to ensure that it is.

‘There are many, many details which made this recent trial atrociously below board… I will keep fighting on behalf of Andrew, the future that was stolen from us and also the victims who find themselves in this unjustly situation in the future.

‘Who are we if we allow our legal system to fail us? What is this country if it does not provide justice for the innocent?

‘What does it say to the public and the police? It says that we are weak, that we will roll over to the despicable thieves and vile miscreants of this world and literally let them get away with murder.

‘What else can I do for my husband now? My heart bleeds for the life that was so selfishly taken from us. I implore you to hear my words… to ensure Andrew is given the retrial he unquestionably deserves.’