Rome: Pope Francis’ former treasurer, Australian Cardinal George Pell, has told a virtual book launch press conference that he had no intention of seeking damages from the Australian government for his incarceration and said he intended to split his time between Sydney and the Vatican.

Pell left his job as prefect of the Vatican’s Economy Ministry in 2017 to face charges that he sexually molested two 13-year-old choir boys in the sacristy of the Melbourne cathedral in 1996. After a first jury deadlocked, a second unanimously convicted him and he was sentenced to six years in prison. The conviction was upheld on appeal only to be thrown out by Australia’s High Court, which in April unanimously found there was reasonable doubt in the testimony of his lone accuser. 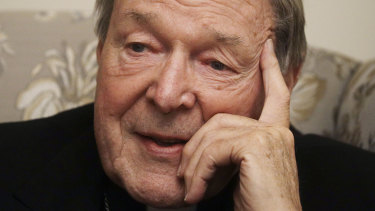 Cardinal George Pell during an interview in Rome last month.Credit:AP

Talking to reporters for the online launch of his new book Prison Journal – The Cardinal makes his appeal about the 404 days he spent in solitary confinement before his sexual abuse conviction was overturned by Australia’s High Court, Pell again suggested there was evidence — but not proof — that his prosecution was related to his work trying to reform the Vatican’s murky finances.

The cardinal ran into stiff resistance from the Vatican’s Italian old guard during the three years he tried to impose international financial transparency, budgeting and accounting standards on the Holy See bureaucracy.

He repeated unsubstantiated and unsourced Italian media reports suggesting that money was sent from the Vatican to Australia to influence his prosecution. There is no indication an active investigation is under way in either Australia or the Vatican.

“I myself am quite confident that money did go from Rome to Australia about that time, but I’ve got no proof about where that finished up,” he said. “Another image I’ve used is there’s smoke, but we don’t have proof of fire. But I come from a bushfire country, and sometimes the entire state is covered with smoke.“ 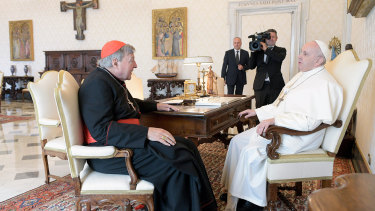 Cardinal George Pell, left, met with Pope Francis on his return to the Vatican after his sex abuse conviction and acquittal in Australia.Credit:Vatican News/AP

Pell also praised US President Donald Trump’s “splendid” Supreme Court appointments and defence of Christian values but questioned his effort to sow doubt in the integrity of the US presidential election.

In the book, he muses on his court case and current events in the Catholic Church and around the world, and at one point says Trump is unfortunately “a bit of a barbarian, but in some important ways, he is ‘our’ (Christian) barbarian.”

Pell said Christians had an obligation to bring their values to the public sphere and said Trump had made a “positive contribution” particularly with his three Supreme Court picks, two of whom are Catholic.

“In other areas, I’m not sure that he’s been sufficiently respectful of the political process and it’s important that people believe they’re getting a fair go,” Pell said. “And if that’s not the case, it needs to be established very, very clearly because it’s no small thing to weaken trust in great public institutions.”

Pell said he had met with many of his old collaborators and friends since returning to the Vatican, including emeritus Pope Benedict XVI.

He said he believed Benedict should be made a doctor of the church one day — the church’s highest honour that is bestowed after someone is made a saint, to recognise his or her contributions to Catholic teaching.

But he said in the future, the Vatican must quickly adopt regulations governing resignations of future popes. It was a reference to the unprecedented situation of having two popes living in the Vatican, with Benedict still a point of reference for traditionalists nostalgic for his doctrinaire papacy, some of whom have refused to recognise Francis as pope.

“The unity of the church is not automatic,” Pell said. “I haven’t found a single person here in Rome who doesn’t think there must be protocols for a pope who retires. Obviously we love the popes, we have great respect for them. But the needs of the situation — the unity of the church — is on another level that goes beyond a personality.“