Phil Cleary is pacing the room, speaking rapid-fire, pausing only to eyeball audience members to make sure a point has hit its mark.

The famous football coach exudes the same energy he had for Coburg players 30 years ago, even though this post-dinner talk in Pakenham on preventing violence against women is a figurative world away from suburban ovals and the Victorian Football Association. 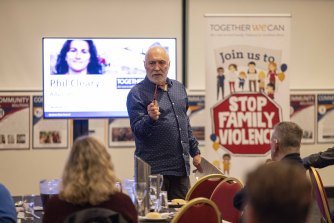 But Cleary has had this focused fury half his life, and the image on a screen behind him shows why. It’s a photograph of his sister, Vicki, who was stabbed and killed in August 1987.

One of Cleary’s last memories of his sister is seeing her with a cake in the Coburg rooms to celebrate his 200th VFA game. Her death, weeks afterwards, and a devastating trial sparked the fire that has driven Cleary since.

“From the courtroom to the local sporting club, complicity is everywhere. It’s no good us paddling about this, we’ve got to be ferocious about it,” he tells a gathering of community sporting clubs and council staffers at Cardinia Cultural Centre.

The complicity Cleary talks about is the failure to condemn long-ingrained misogyny. He cites as examples Tony Abbott and the “Ditch the Witch” banner, footballers who sledge female umpires, and judges who empathised with murderous husbands that their wives had left them. This disrespect, he argues, illustrates a society embedded with male privilege, prejudice and violence. 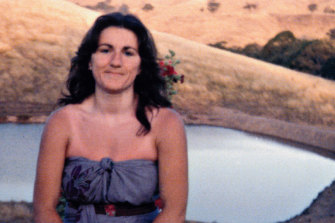 Vicki Cleary was ambushed and killed by her former partner.

Vicki Cleary was ambushed, stabbed and killed outside her workplace by her former partner, Peter Keogh, who then beat a murder charge by arguing she “provoked” him by leaving him months earlier. Keogh was convicted of manslaughter and did three years and 11 months in jail.

Phil Cleary remembers being astounded by the injustices he saw in court. Driven by Vicki’s death and his mother Lorna’s suffering over it, he became an activist and his campaigning led to the scrapping of the provocation defence in Victoria in 2005. During a stint as an independent MP, he raised the previously taboo subject of family violence in federal parliament.

Like the best coaches, he has adapted to keep his message fresh. Having long been at the institutions that wield power, he has for years addressed local sporting clubs and community forums to reinforce messages of respect and equality. 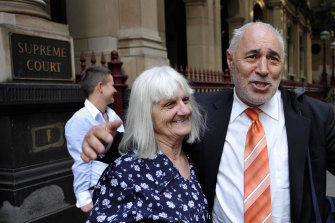 Phil Cleary and mother Lorna outside the Supreme Court in 2010.

The sporting clubs were the places, he says, where disrespect used to flourish, from derisive comments upwards. The man who banned stripper nights from Coburg in the 1980s no longer thinks footy clubs are the hotbed of misogyny they once were.

“We need to be among that culture, so where else would you be but sporting clubs?

Cleary tells the Cardinia crowd that during a recent stint coaching West Coburg’s under-16 boys, he appointed women as statisticians, so players could hear female voices of authority in huddles.

Then, at Avondale Heights, he and coach Donald McDonald addressed players on gender equality. That season, when an opposition player told a female umpire she should be home making babies, an Avondale Heights player singled out the offender. After the game, Cleary pledged to his players’ mothers, sisters and girlfriends their club wouldn’t accept such disrespect.

He urges the Cardinia clubs to get women “front and centre” when outlining what a club stands for. “A woman and a bloke on the same platform,” he says.

“It’s still troubling, and it’s still a crisis, but we’re in a better place. We’ve just got to grasp the opportunity.”

The AFL says the ratio of males/females registered with an involvement is about 2:1. It has almost 600,000 female participants in all levels of football, about 2100 of them as registered coaches. That figure represents 8 per cent of coaching ranks, and the aim is to increase that to 18 per cent by 2025.

Among the Cardinia crowd is Shara McAuley, the president of the Bunyip Junior Football Club. With four sons in four teams, much of her weekend revolves around football, but she took on the role at her club because there are so few female leaders in the game.

Two years into the presidency, McAuley can remember being told by a man at the club that “maybe the women should stick to the canteen”. And she believes gender was behind an attempt last year to “sabotage” her leadership.

“It’s a thing that will die out pretty quick, but it’s still there,” she says of the lingering misogyny at football clubs.

McAuley says she was heartened this year when a man on the committee told a detractor: “That’s not right, Shara’s getting shit done.”

“It’s a small thing, but it was a big moment for me. It means you just don’t chuck in the towel,” McAuley says.

Seaford Football Netball Club president Dale O’Neil remembers the impact Cleary had on the men and under-19 players last year.

Seaford was a blokey setting years ago, where photographs of female players were taken off the wall and put in the bin. But O’Neil says the atmosphere has changed: the men’s teams now support the women’s team and listen to huddles, and escort their counterparts leaving the club after training.

Chris Gomez was another who found Cleary’s words confronting, but the message critical.

When he joined Pakenham United Football Club about six years ago, it was the soccer club’s position the women’s team cleaned the rooms after the men’s game because “they would know how to do that”.

Gomez scrapped that rule on becoming president three years ago. Now, the women and men players all get new kits and play their respective games on the same pitch, and membership – which had declined under the old guard – has picked up.

Cleary tells The Age he is frustrated that a crisis in which 20 Australian women have died violently in 2022 doesn’t provoke the outrage it should.

“We complain about murder in Ukraine, we are outraged by it,” he says.

“But the murder of women, and the pissant defences of their killers, are not mourned. And they have to be.”

Vicki Cleary and other victims of family violence will be remembered at Coburg Football Club on Sunday, June 19, at 1.45pm, before the VFL game against Richmond.