PICTURED: Indiana mall gunman, 20, who killed three people with 24 rounds in just two minutes after waiting in the bathroom for an hour: Good Samaritan, 22, who was shopping with his girlfriend brought him down with his own handgun 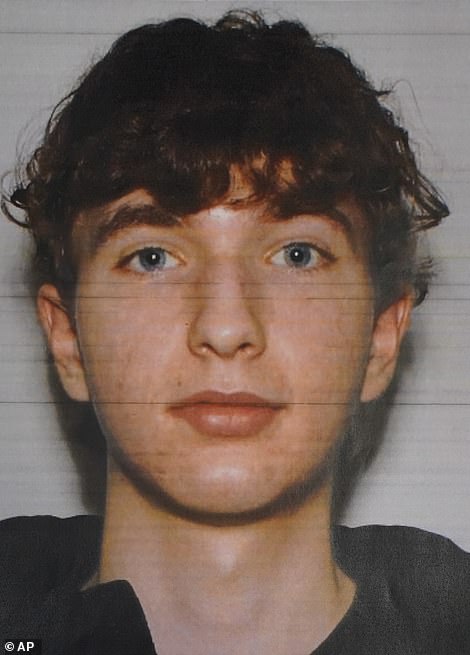 Jonathan Sapirman, 20, is the gunman responsible for yesterday’s attack at the Greenwood Park Mall in Indiana. He had recently been evicted from his apartment, according to his family. He was killed at the scene by a bystander carrying his own weapon

The gunman who killed three people in an Indiana mall yesterday fired 24 rounds from a legally owned rifle after waiting in the mall bathroom for an hour, and was killed two minutes after he started shooting by a Good Samaritan.

Jonathan Sapirman, 20, is the gunman responsible for yesterday’s attack at the Greenwood Park Mall in Indiana. He had recently been evicted from his apartment, according to his family.

Sapirman waited in the mall bathroom for an hour before he opened fire in the food court using a Sig Sauer 400M rifle that he legally purchased in March this year at a local gun store.

He killed Pedro Pineda, 56, Rosa Mirian Rivera de Pineda, 37, and Victor Gomez, 30. It’s unclear if he shot them at random or if they were intended targets.

Sapirman was then shot dead by 22-year-old Elisjsha Dicken, who was shopping with his girlfriend and who pulled out his own weapon when he saw the gunman open fire.

Dicken was named by police on Monday and was hailed as a hero for his quick-thinking.

‘His actions were nothing short of heroic. He engaged the gunman from quite a distance with a handgun and was very proficient,’ Greenwood Police Chief Jim Ison said at a press conference on Monday afternoon where he also revealed;

Sapirman was recently evicted from his home in Indiana, according to his family

He added that Dicken had no law enforcement or military training, but video showed him calmly gesturing for crowds to evacuate while he trained his weapon on Sapirman.

Sapirman had no adult criminal record but he was known to police for two incidents that occurred when he was a juvenile; one involving a fight in school and one that involved him running away from home. His family has not commented on the incident. 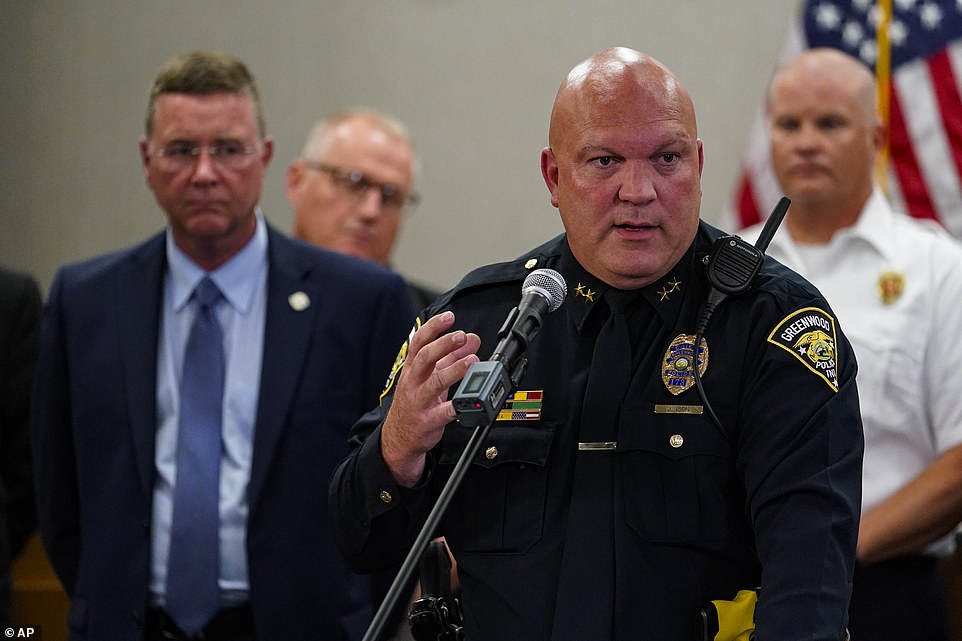 ‘His actions were nothing short of heroic. He engaged the gunman from quite a distance with a handgun and was very proficient,’ Greenwood Police Chief Jim Ison said at a press conference on Monday afternoon. 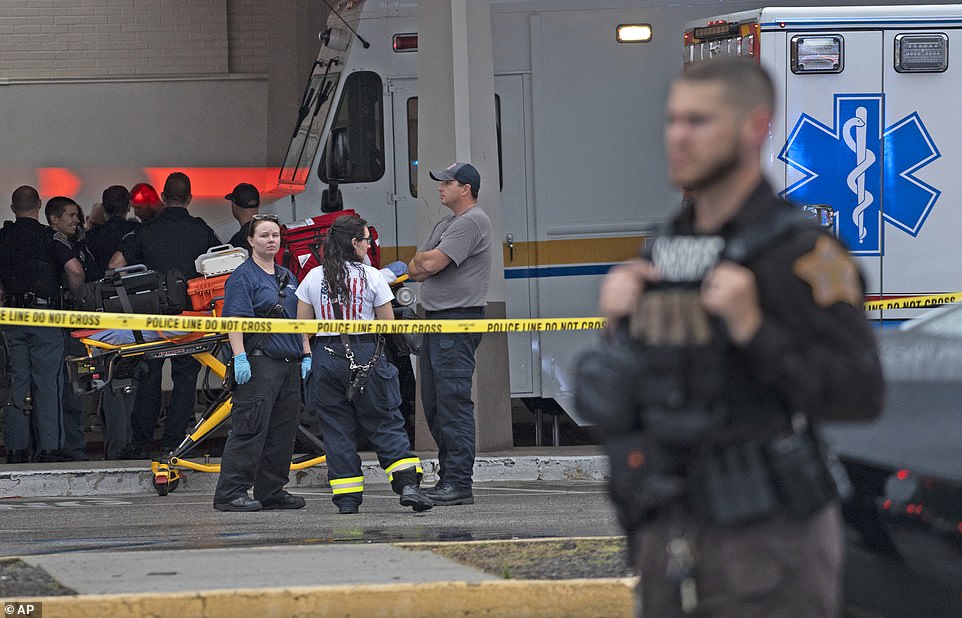 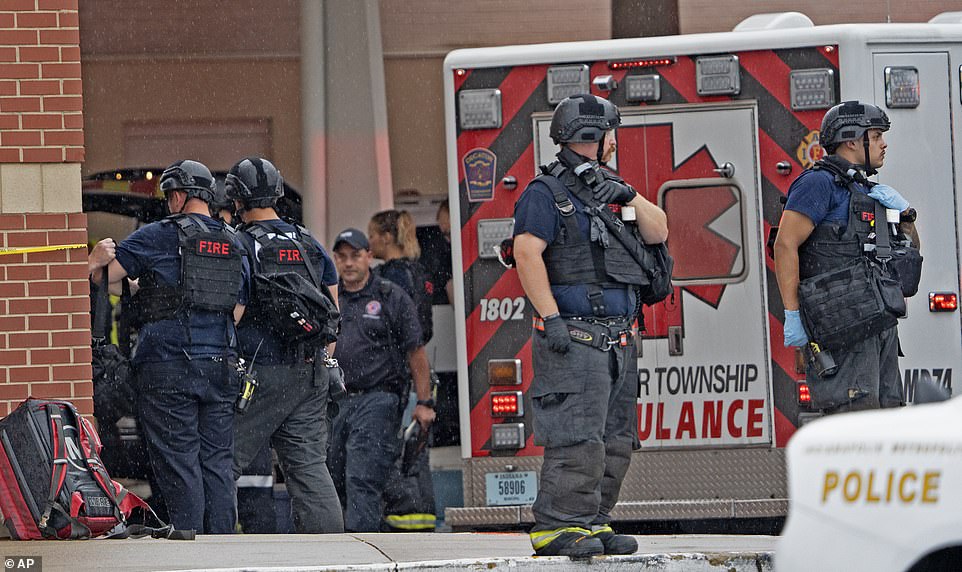 Emergency personnel continuing to work through the scene at the Greenwood Park Mall in Greenwood, Indiana 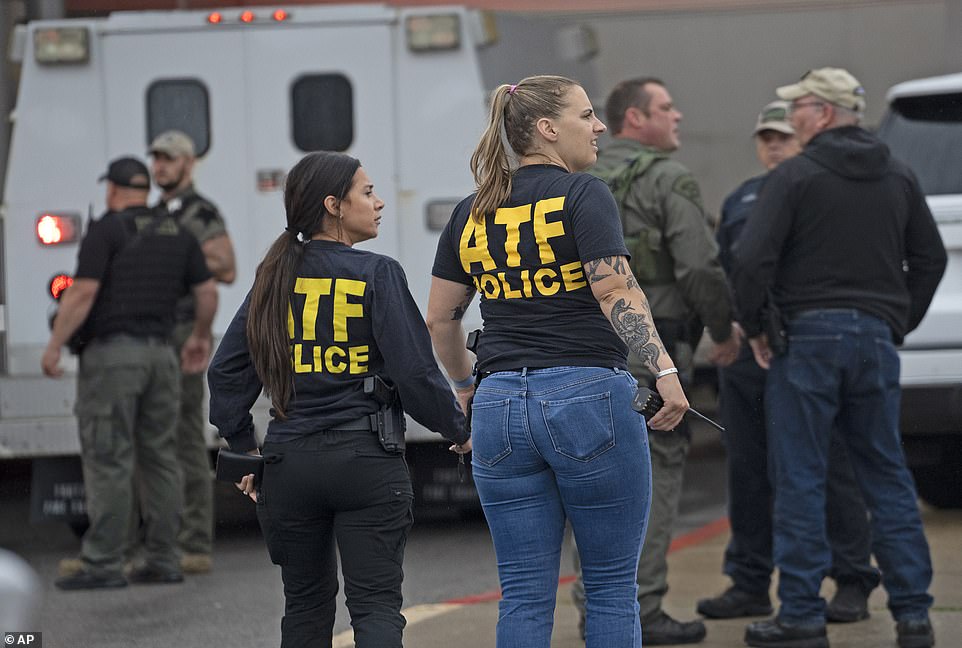 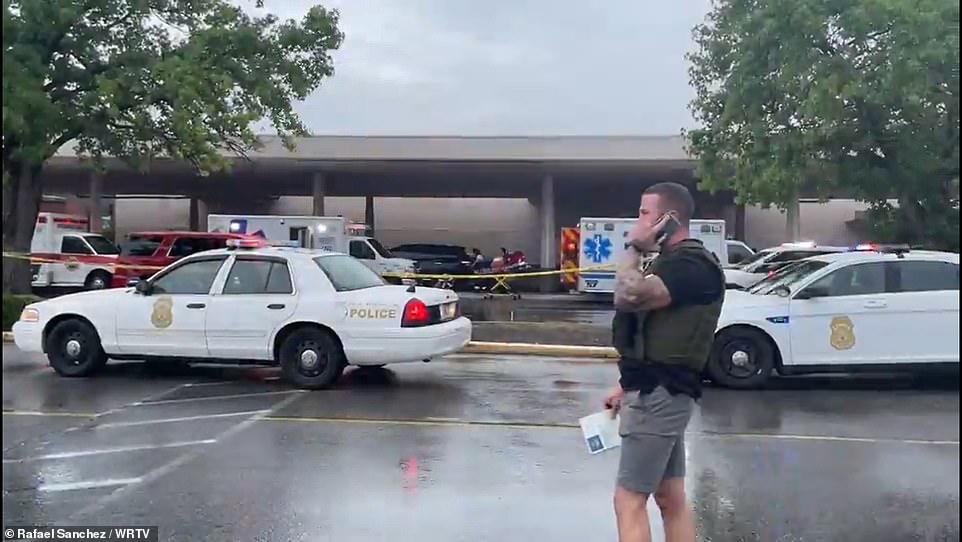 In total, four people were killed in the shooting at Greenwood Park Mall, including the gunman 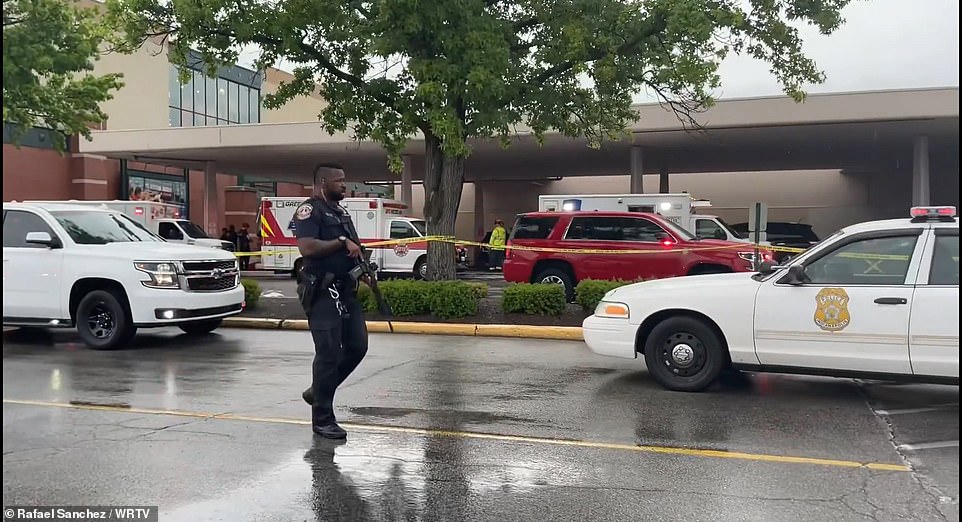 The shooter was shot dead by a good Samaritan who witnessed the shooting, according to Greenwood Police Chief James Ison

Speaking to the Indianapolis Star, James Arthur, who win the mall with his family, said the gun ‘sounded like a big gun.’ Arthur said that he thought that he heard at least 20 rounds go off.

Another witness, , Abigail, who works at the mall, told WRTV reporter Rafael Sanchez: ‘I was standing at the gate, ready to close to for the day. I heard 30 gunshots and I just saw people running towards the store. I was just letting in as many people as I could before I shut the gate.’

She added: ‘I wanted to close the gate but people kept running at me… I have three kids at home and I just wanted to get home.’

Chris Roy, the assistant manager of the Vans store in the mall, relayed a similar story.

Through the back of the store, the Vans staff met staff and customers from other stores through an interior hallway. In total, Roy said that he stayed hidden with around 50 other people. He added: ‘We just instructed everybody to keep quiet.’

After about 10 or 15 minutes of hiding, police cleared them from the hallway and escorted them out of the shopping mall.

The police chief told reporters: ‘It appears that he had a rifle with several magazines of ammunition, entered the food court and began shooting.

An investigation into the attack is on-going, with the FBI, ATF, Department of Homeland security and the Indianapolis Metropolitan Police all assisting.

Chief Ison said that officials are studying security footage showing the moments before the shooting.

Officers were called shortly before 6 p.m. to Greenwood Park Mall, where gunshots were reportedly fired in the food court, assistant chief of police Chris Bailey said at a brief news conference earlier on Sunday.

Authorities searched the mall for any other victims or for those who may have been hiding, but Bailey said he believes the shooting was contained to the food court. 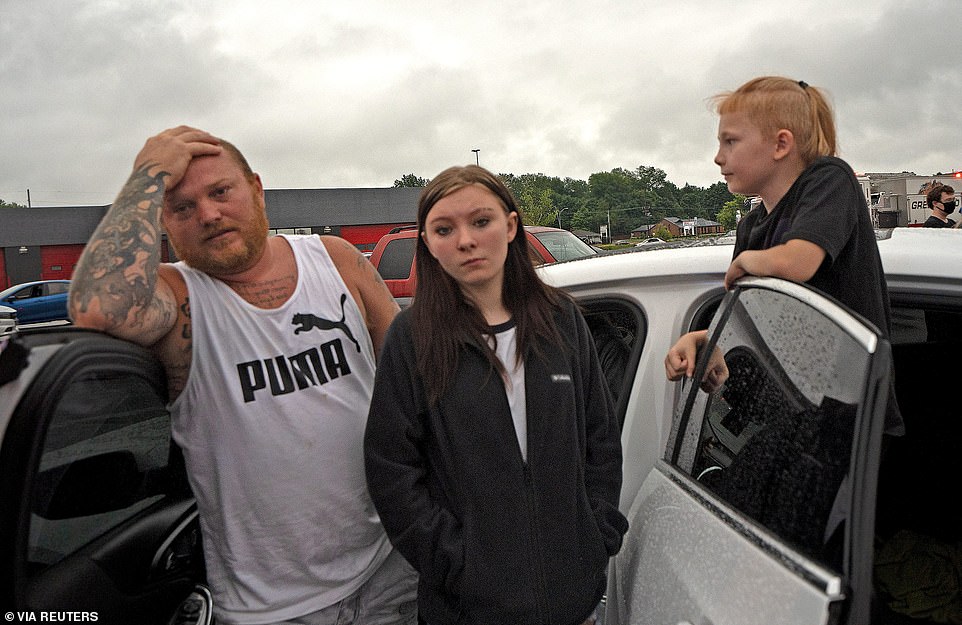 James Arthur and his family, including daughter, Madison Willoughby react after exiting the mall following the shooting 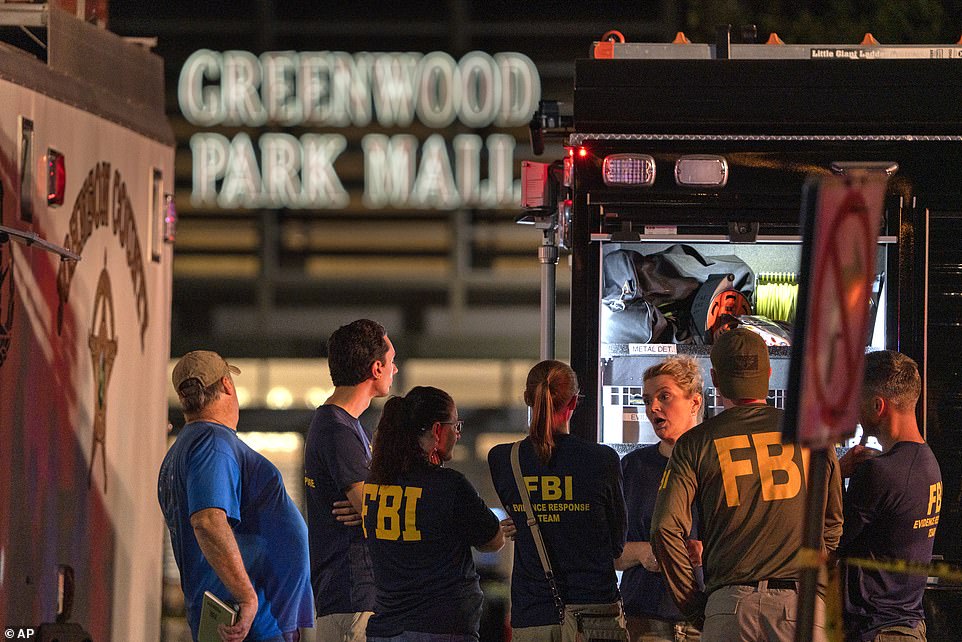 Greenwood Assistant Chief Chris Bailey said at press conference: ‘You are seeing the best that public safety has to offer right now behind us’ 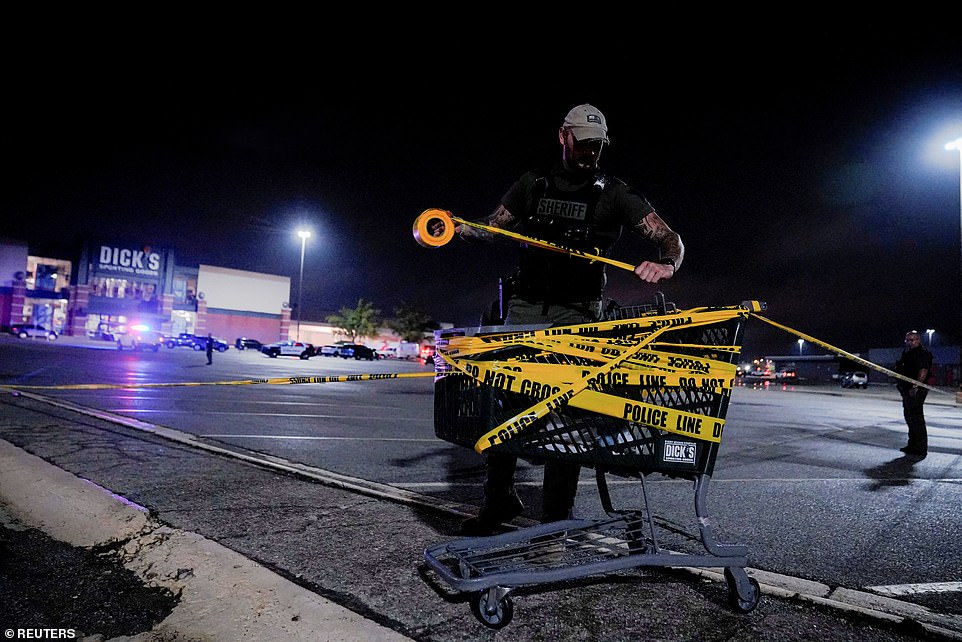 A law enforcement officer attaches crime scene tape to a shopping cart after a shooting at a mall in the Indianapolis suburb of Greenwood, Indiana 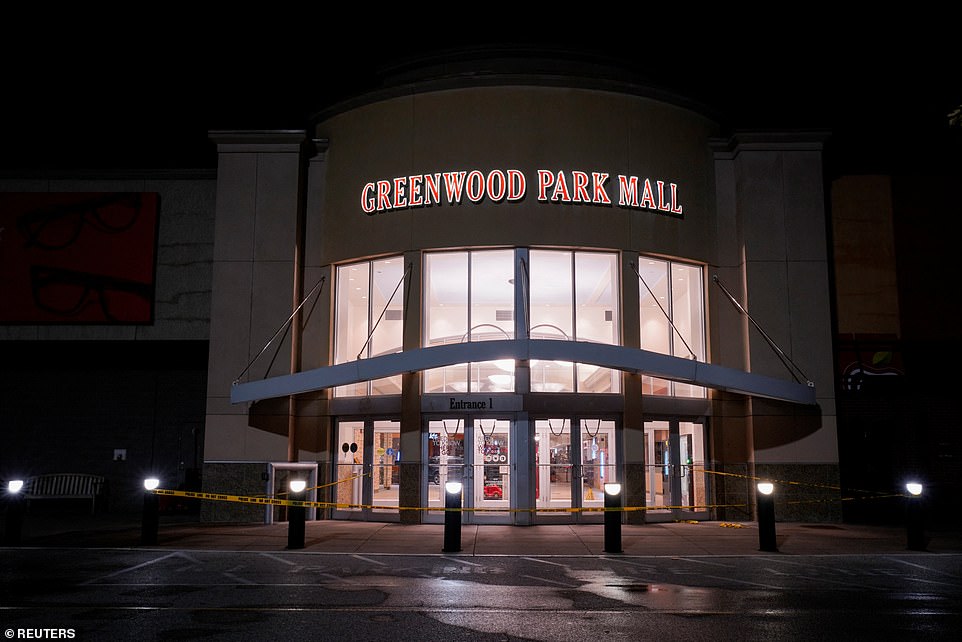 A view of Greenwood Park Mall, after a shooting, in the Indianapolis suburb of Greenwood, Indiana, U.S. July 17, 2022 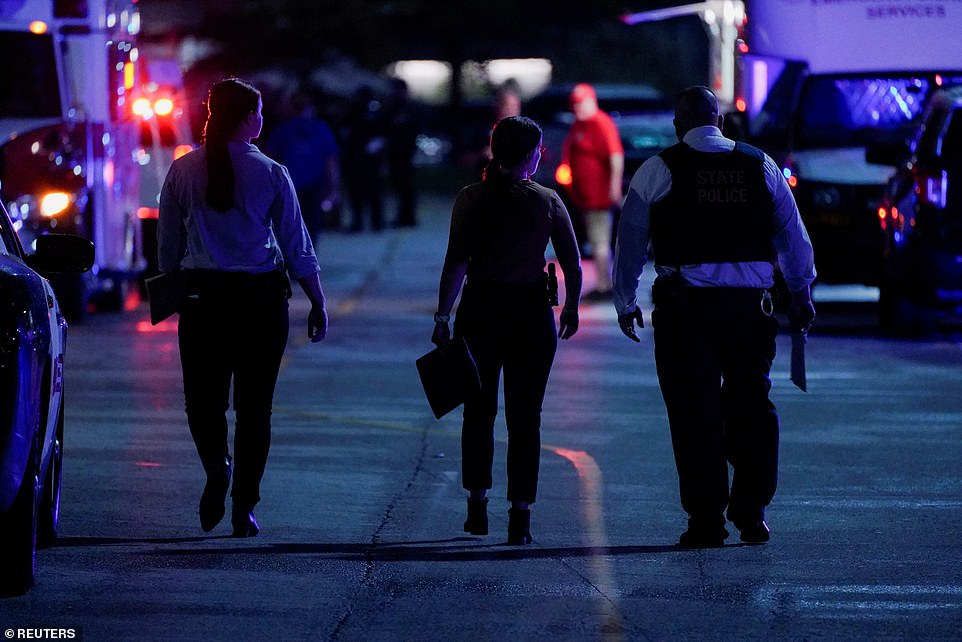 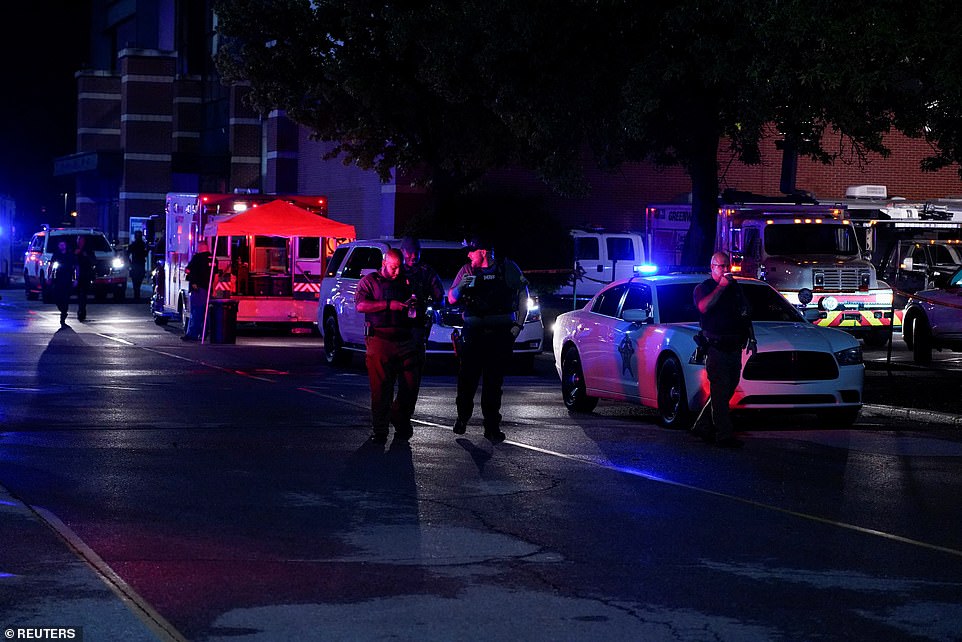 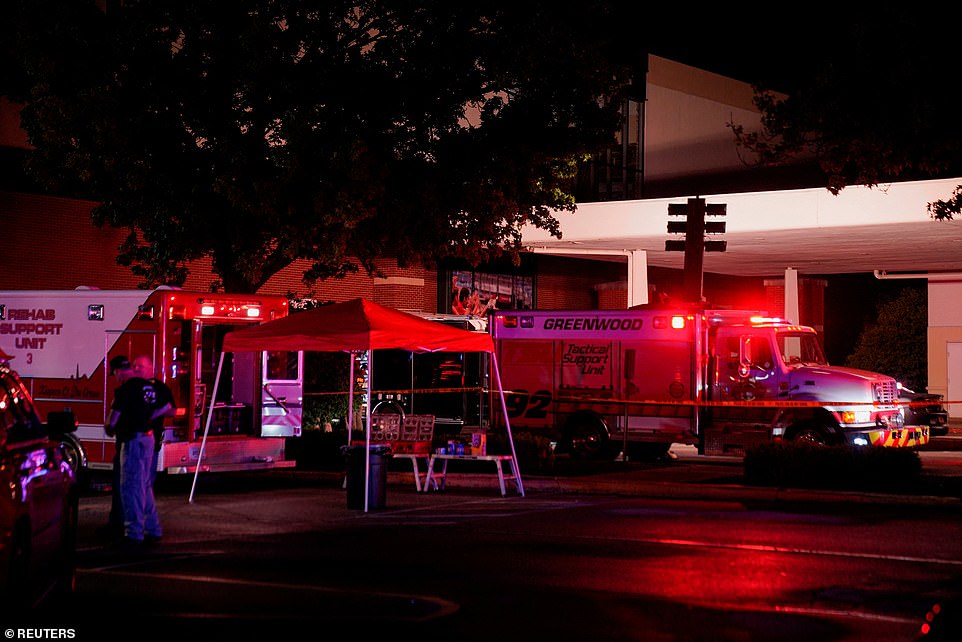 Law enforcement officers stand guard near the crime scene after a shooting at a mall in the Indianapolis suburb of Greenwood, Indiana, U.S. July 17, 2022

Officials said the suspicious backpack was found in a bathroom close to where the shooting unfolded beside a Dick’s Sporting Goods store. It was investigated by the bomb squad before being deemed to not be a threat.

‘We experienced a mass shooting this evening at the Greenwood Park Mall,’ Mark Myers, the mayor of Greenwood, Indiana, said in a statement.

Myers thanked the good Samaritan for his quick action, and asked for ‘prayers to the victims and our first responders.’

‘This tragedy hits at the core of our community,’ he said.

The mayor said that while the shooter’s motive remains a mystery ‘we do know that someone we are calling the ‘Good Samaritan’ was able to shoot the assailant and stop further bloodshed. This person saved lives tonight. On behalf of the City of Greenwood, I am grateful for his quick action and heroism in this situation.’

While Indiana Senator Todd Young, a Republican, tweeted: ‘Terrible news tonight in my home county. Praying for the victims of a shooting at the Greenwood Park Mall. Thank you to our law enforcement officers who responded.’

Senator Mike Braun, also a Republican, said: ‘Praying for families of those killed in a senseless act of violence in Greenwood tonight, and grateful for the brave armed citizen who took action to stop the perpetrator and prevent further tragic loss of life.’

Conservative talk show host Todd Starnes said: ‘Indiana police say a mass shooter who opened fire inside the food court of the Greenwood Park Mall was taken down by a Good Samaritan armed with a handgun. Your Second Amendment at work.’ 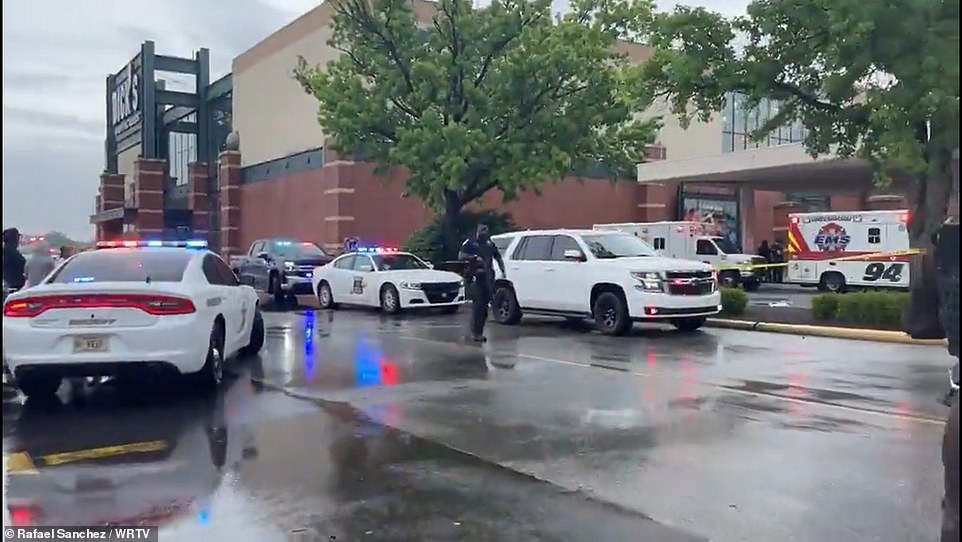 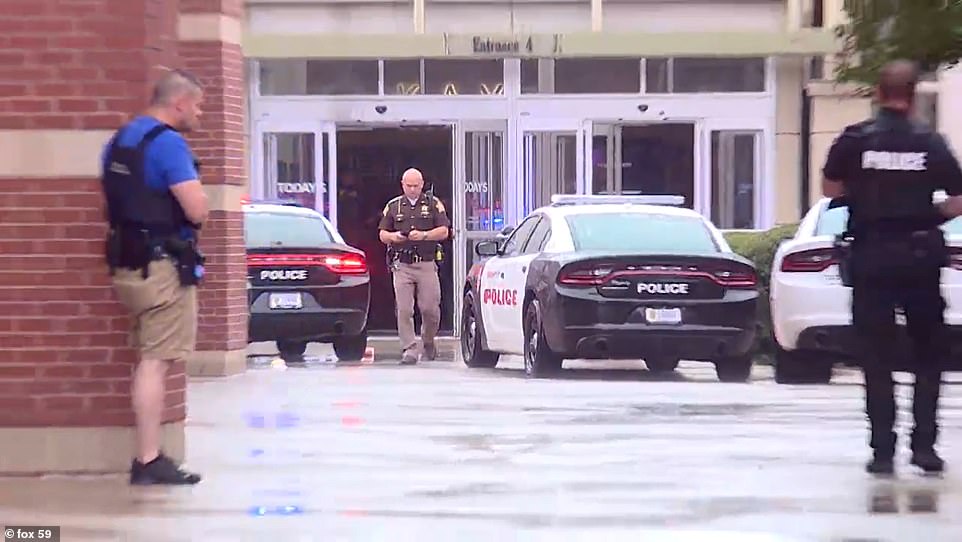 In a statement, Greenwood Mayor Mark Myers said: ‘This tragedy hits at the core of our community

The town of Greenwood, Indiana, is located around 15 miles south of Indianapolis

Hours after the shooting in Greenwood, one person was killed and three others wounded in another Indianapolis suburb. This time in Beech Grove, just 11 miles from Greenwood.

That shooting took place in a park.

Sunday’s shooting is the latest attack in a wave of gun violence plaguing the United States, where about 40,000 deaths a year are caused by firearms, according to the Gun Violence Archive.

It comes just weeks after a gunman opened fire on a July 4 parade in an affluent Chicago suburb, killing seven people and injuring at least three dozen.

That incident followed two massacres in May that saw 10 Black people shot dead at a Buffalo, New York supermarket, and 19 children and two teachers slain at an elementary school in Uvalde, Texas.

According to the Gun Violence Archive, 2022 has so far seen 352 mass shootings, while 24,141 have been killed by guns. In the last 72 hours alone, the archive shows that 147 people have died in incidents involving a gun.

The recent surge in gun violence has reignited the divisive debate over firearm regulation. A US House of Representatives’ committee is set this week to discuss a bill that would ban assault weapons for the first time in nearly 20 years.