PIERS Morgan has blasted Tory veteran Lord Heseltine for insulting millions of people who voted for Brexit by demanding another say.

One of the leading pro-European campaigners has had the Tory whip suspended this week for promising to back a Liberal Democrat in the EU elections on Thursday. 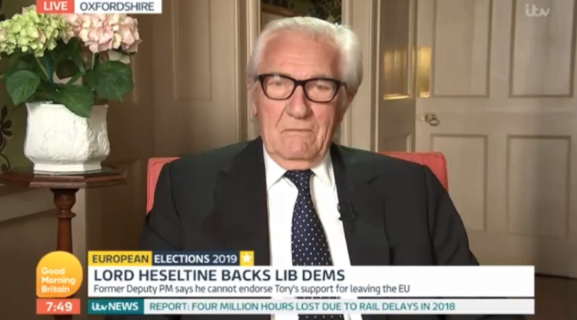 The fanatical Remainer previous vowed he would never quit the Tories but now says he won't vote for them until the party "sees sense" and caves to demands for another Brexit referendum.

Despite turning against his own party, the 86-year-old said he has no intention of being forced out or resigning.

And Good Morning Britain host Piers Morgan challenged him today, saying he was insulting Leave voters by demanding another say.

He stormed: "You're categorising 17.4million people, effectively, as a bunch of extremists who have committed suicide with the country's economy.

isn't that a little bit insulting to all those people who voted in a democratic referendum, who listened to the debate for months and months on end, who cast their vote and now expect the government, as promised, to enact the result of the referendum?"

But grandee Lord Heseltine shot back: "Do you regard a referendum as the ultimate word? Nicola Sturgeon in Scotland. is longing for a second referendum.

"Nigel Farage said he thought there would be a second referendum when eh thought he was going to use.

"You go on using every opportunity that you have."

But Piers didn't let him get away with it. He reminded him: "David cameron made it crystal clear this was a once in a lifetime vote.

"If the British people, having voted, see that their vote is ignored and that the Prime Minister’s pledge was a complete load of nonsense, why, in all good conscience, should any of us ever vote in any democratic referendum or election ever again?"

Theresa May's Tories face a huge drubbing in the EU elections on Thursday, which she repeatedly promised Britain wouldn't take part in.

As she's failed to get us out of the EU the Tories and Labour are set to see their votes collapse and go to the Brexit Party instead.

She claims that Nigel Farage can't deliver Brexit properly and he's only shouting from the sidelines.