Nearly 20,000 British holidaymakers are affected as P&O Cruises cancels trips through the Gulf of Oman amid rising tensions with Iran

P&O Cruises has cancelled trips through the Gulf of Oman amid rising tensions with Iran, affecting nearly 20,000 British holidaymakers.

The 11-day voyages on boat MV Oceana – the 77,000-tonne liner which sails between Bahrain, the United Arab Emirates (UAE), and Oman – are to be halted.

Sources claim customers will be hit when US-owned Carnival, who own P&O Cruises, makes the announcement today.

The firm confirmed the decision was made in light of heightened Gulf tensions, as Britain joins the US in a maritime security mission to protect merchant ships.

Carnival chiefs are concerned the MV Oceana, which boasts the Union Jack flag across its front, will be a prime target of Iranian harassment, insiders said. 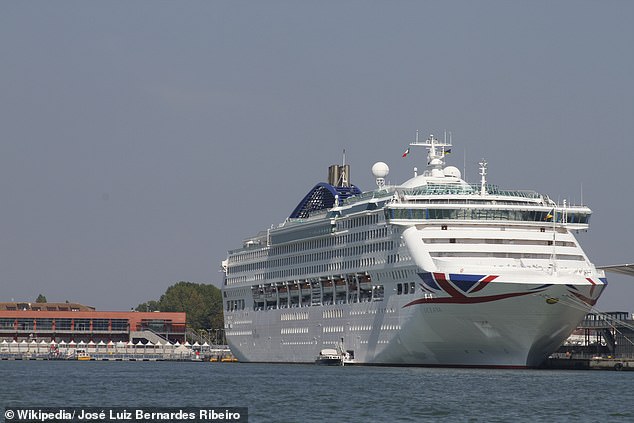 MV Oceana (pictured above) is set to be halted over rising tensions with Iran. The liner usually sails through the Gulf of Oman

This followed the seizure of the Iranian supertanker Grace 1 by the Royal Marines as it sailed past Gibraltar on July 4, accusing it of violating sanctions on Syria.

The Iranian government has threatened to close off the Strait of Hormuz – through which a fifth of the world’s oil supply passes – if other countries join the US in its ‘maximum pressure’ campaign to strangle the Iranian economy.

Last year, the Trump administration unilaterally withdrew from a nuclear pact with Iran, negotiated alongside other big powers.

An insider said: ‘There are a lot of people that are going to be affected by this decision.

‘In one meeting, it was made clear that executives at the top had cold feet, and had decided to cancel the voyages around the Arabian Gulf because of tensions.

‘They specifically cited the Iran crisis as the cause of the cancellation.

‘Then circulars were sent round, letting more people know that thousands of customers’ holidays next season would be refunded or compensated in some way.

‘P&O are planning to send Oceana around the Canaries instead.

‘We were also told that a lot of guests would be calling, so managers emailed round to say that they needed dozens of volunteers to answer calls over the weekend.

‘The Contact Centre will need a lot of hand, or that’s what they’re preparing for.

‘It’s a popular holiday for P&O enthusiasts. They’re going to be disappointed.’

The boat is understood to currently be sailing through the Mediterranean.

The cancelled trips would have taken place between this October and next March, and are to be rerouted to the Canaries.

It would have sailed from Dubai to Abu Dhabi, onto Manama, cruises to Muscat, Khasab, and finally Sir Bani Yas Island, before concluding its voyage in the UAE.

Guests will be given a refund, it is understood.

Sources said the company emailed staff to ask them to help customer services deal with the expected surge in calls from angry guests.

P&O Cruises president Paul Ludlow said: ‘The increased tension in the region highlighted by the attacks on tankers in the Straits and the detention of a British-flagged tanker by the Iranian authorities means as a British company flying the Red Ensign it is not advisable for us to maintain our planned Dubai and Arabian Gulf programme this winter season.

‘We have therefore taken the unusual step of withdrawing Oceana from the region for the upcoming season.

‘Whilst we appreciate our guests will be disappointed, the safety of our guests and crew is absolutely paramount and given our UK status, coupled with the uncertainty in the region, we have had to make this difficult decision..’.

Built in Monfalcone, Italy in 2000, the MV Oceana is the fifth-largest of seven ships currently in service with P&O Cruises, and has a maximum capacity of 2,270.