‘We will have to start again from nothing’: Pope Francis warns of ‘final catastrophe’ of ‘atomic war’ that will ‘extinguish us’ as he prays for God to ‘stop the hand of Cain’

Pope Francis on Wednesday evoked the spectre of a nuclear war, where whoever is left of humanity would have to start all over again on ‘the day after’, and appeared to ask God to stop the aggressor in Ukraine.

The 85-year-old Francis dedicated his address at his weekly general audience to ageing and corruption in society, telling the Biblical story of the Great Flood that God used to punish a sinful and corrupt humanity and which only Noah and his family survived.

‘Our imagination appears increasingly concentrated on the representation of a final catastrophe that will extinguish us,’ he said, then departing from his prepared text to add: ‘such as that which would happen with an eventual atomic war.’ 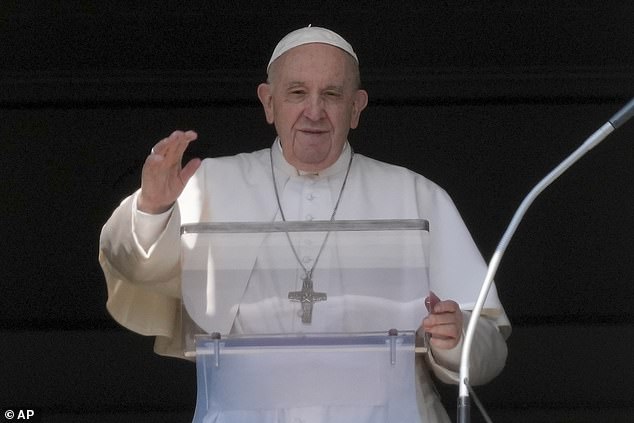 Pope Francis greets the crowd prior to reciting the Angelus noon prayer from the window of his studio overlooking St.Peter’s Square, at the Vatican

‘The day after, if there will still be days and human beings we will have to start again from nothing,’ he said, without specifically mentioning the Ukraine war in that part of the audience, held before several thousand people inside the Vatican.

Minutes later, however, he lowered his voice and using a sombre tone, read a prayer about the Ukraine war written by an Italian archbishop.

‘Lord Jesus Christ, son of God, we implore you to stop the hand of Cain,’ he said, referring to the Biblical character who turned on his own brother, attacking and killing him.

Francis, who has previously called the war an ‘unacceptable armed aggression’, did not name any countries on Wednesday. 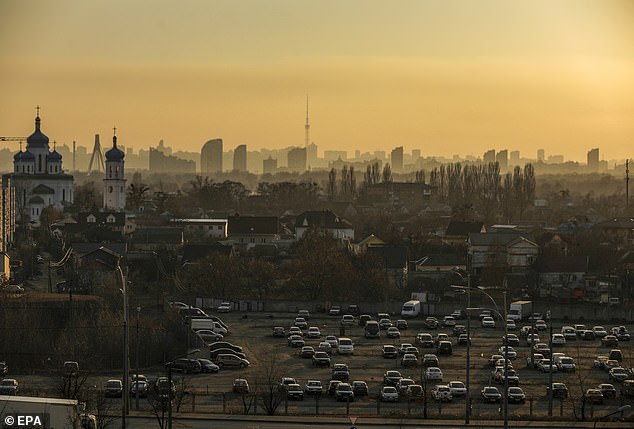 The prayer continued, saying: ‘When you (God) have stopped the hand of Cain, take care of him also. He is our brother.’

Moscow says its action is designed not to occupy territory but to demilitarise and ‘denazify’ its neighbour.

The prayer which the pope read on Wednesday, written by Naples Archbishop Domenico Battaglia, portrayed Jesus as ‘born under the bombs of Kyiv,’ and ‘dead in the arms of a mother in Kharkiv,’ or as ‘the 20-year-old sent to the front lines.’

Earlier in St. Peter’s Basilica, the pope met several hundred Italian school children and asked them to think about their counterparts in Ukraine ‘who have to escape from the bombs. They are suffering so much and it is cold there’. 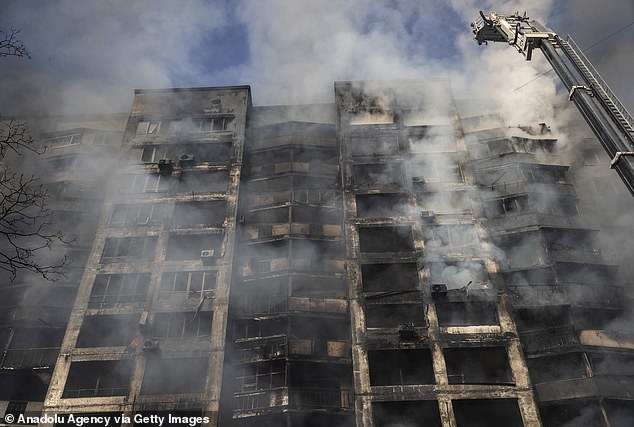 Firefighters respond the fire at a damaged residential building that was hit by a Russian attack in Kyiv, Ukraine on March 15 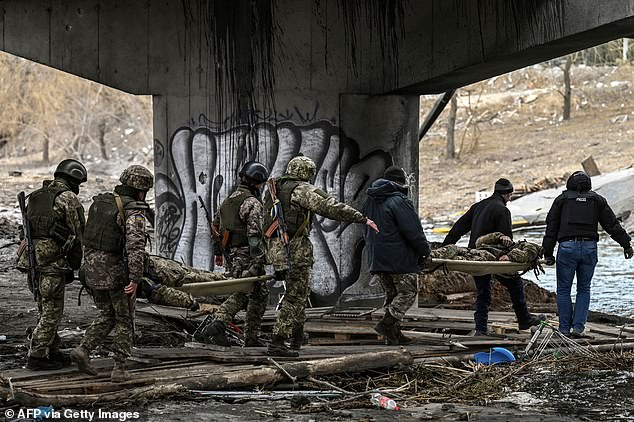 Ukranian servicemen carry the body of comrades on stretchers in the city of Irpin, northwest of Kyiv. Russian forces advance ever closer to the capital from the north, west and northeast