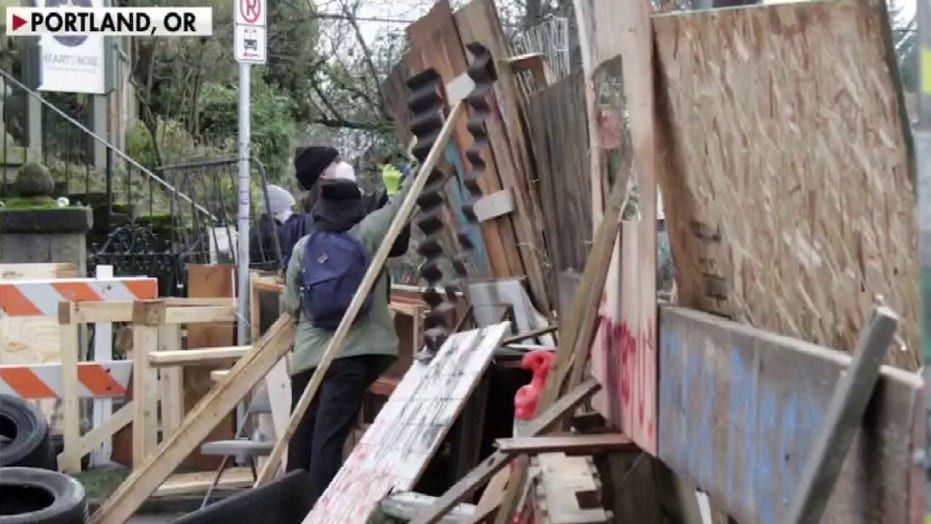 Protesters in Portland, Ore., have defiantly fortified their position at the “Red House on Mississippi” after Mayor Ted Wheeler on Tuesday authorized police to use "all lawful means" in ending the illegal occupation at the home.

By Wednesday, occupiers had stockpiled defensive gear and laid down booby traps aimed to keep officers out, including piles of rocks and homemade spike strips to puncture the tires of any vehicles that could breach the barricades, according to reports.

Protesters have rallied at the private North Portland residence for months to demonstrate against the eviction of a Black and Indigenous family. The activists have shown no signs of leaving and hundreds were reported to have come out to the home on Tuesday and Wednesday. 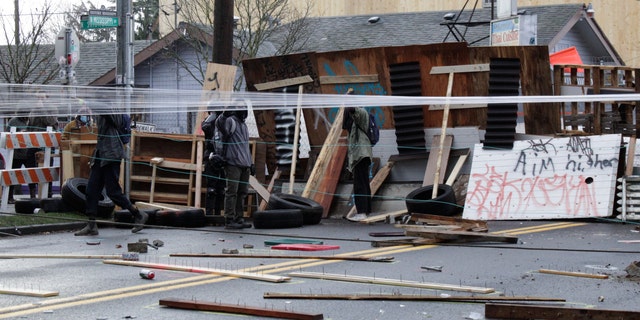 Protesters stand behind barricades at their encampment outside a home in Portland, Ore., on Wednesday, Dec. 9, 2020. (AP Photo/Gillian Flaccus)

Blockades fabricated with wood, metal, and wire fencing now stretch at least two-and-a-half blocks, with groups of black-clad guards posted at each intersection.

“Help us occupy this land,” said Ragina Rage, an activist and community organizer, according to The Oregonian. “Help us do this so that we can protect other families that they’re going to do this to. They will target other Black and brown families because of the anti-Blackness that exists within this … system.”

The Portland Police Bureau on Wednesday said those involved in the occupation have threatened and assaulted people and "their actions indicate the intent to continue to do harm to the community."

At least 100 demonstrators gathered outside the home on Tuesday evening and proclaimed it the “Red House Autonomous Zone," according to Oregon Public Broadcasting. The gathering came after officers — responding to the new owner's complaints — conducted a sweep that morning and arrested about a dozen people.

Wheeler shot back on Tuesday night, declaring that: "There will be no autonomous zone in Portland," like the one activists built in Seattle over the summer.

Residents in the area believe the city is handling the situation wrong, and that the blockade of the street “makes it really inconvenient for the neighbors."

“I can’t understand why Wheeler and (the police) allowed them all day to fortify the thing,” resident Brad Ness said of the barricades, according to the paper. “This is ridiculous.”

In a videotaped message on Twitter Wednesday morning, Portland Police Chief Chuck Lovell told those inside the barricaded zone to: “Leave it behind. Put down your weapons and allow the community to return to order."

"We want a peaceful and safe resolution to the occupation of public space on North Mississippi Avenue," Lovell added. "We are greatly concerned about the fortification of barricades, stockpiling of weapons, armed sentries, attacks on journalists, and threats to kill officers in graffiti in this public space."

The house went into foreclosure and was sold to a developer at a 2018 auction, according to the group.

The family's case gained notoriety this year amid protests against racial injustice. The home sits within a historically Black residential neighborhood that is becoming increasingly gentrified, the paper reported.

Meanwhile, the occupation of the property began in September after a judge rejected the family's request for an emergency stay.

Police said between September and November "at least 81 calls for service were placed for issues related to this property," according to data captured by the PPB.

"Calls for service included, but were not limited to, fights, disturbances, shots fired, burglary, thefts, vandalism, noise violations, trespassing, threats, including by armed individuals, and for illegally blocking traffic, sidewalks and access to homes," authorities said.