London: Prince Charles privately labelled the British government’s plan to send asylum seekers to Rwanda as “appalling”, The Times has reported, in a revelation that threatens to overshadow his appearance at a Commonwealth summit in the central African nation later this month.

The future king, who will represent the Queen at the Commonwealth Heads of Government meeting in Kigali, the capital of Rwanda, was said have criticised Boris Johnson’s refugee policy several times in private, while also expressing concerns it could be problematic ahead of the summit on June 23. 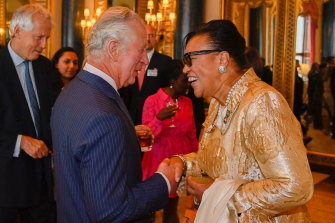 Prince Charles, seen here with Commonwealth Secretary General Patricia Scotland on June 9, 2022, will represent the Queen at the Commonwealth Heads of Government summit in Rwanda later this month. Credit:Getty

Under new laws, migrants who arrive in Britain illegally face being deported to Rwanda under a deal struck by the government in April. The policy is loosely modelled on Australia’s offshore processing system for asylum seekers who arrive by boat, implement by successive governments almost a decade ago. While arrivals may claim asylum once they arrive in the UK under British laws, the new plan will send them to the central African nation while their claims are processed.

An initial legal challenge to the policy failed on Friday after a High Court judge ruled that the first flight – due to deport migrants on Tuesday – could go ahead.

The newspaper quoted a source saying Charles, 73, had said on numerous occasions he was “more than disappointed at the policy”.

Clarence House had not denied that Charles was opposed to the policy but insisted that he had not tried to influence the government.

A spokesman told The Times: “We would not comment on supposed anonymous private conversations with the Prince of Wales, except to restate that he remains politically neutral. Matters of policy are decisions for government.“

Charles will likely be deeply embarrassed by the fact that his views on the policy of sending migrants to had been made public, not least because he will meet with Rwandan president Paul Kagame who signed off on the agreement.

Under the deal, Rwanda will be paid an initial £120 million ($209 million) to receive migrants who arrive illegally in the UK. The full details of the agreement have not been made publicly available.

The British government views the policy as crucial in deterring Channel crossings. More than 10,000 migrants have crossed this year, a figure that was not reached until August last year.

The Commonwealth meeting is the first since Charles was named as the next head of the group in 2018. He and his wife, Camilla, the Duchess of Cornwall, will become the first members of the royal family to visit Rwanda and will use their three-day tour to see a church where 10,000 Tutsis were massacred during the country’s genocide in 1994.

Charles has spoken out on a wide range of issues over the decades, particularly on the environment and climate.

In a reference to Russia’s annexation of Crimea in March 2014, he said: Charles said: “And now Putin is doing just about the same as Hitler.”

His remarks created a furore with the Russian president saying the comparison of him to Hitler was “unacceptable” and “wrong”, adding: “This is not what monarchs do.”

In 2005, he successfully sued a British newspaper after it published an extract from his private journals — written in 1997 when he attended the handover of Hong Kong to China — in which he called Chinese leaders “appalling old waxworks”.

A strong supporter of Tibet and its exiled spiritual leader, the Dalai Lama, he continued to express antipathy to the Beijing regime, boycotting banquets involving the Chinese in 1999 and 2005. He has more recently he has adopted a diplomatic stance towards China.

In a BBC documentary marking his 70th birthday in 2018, he said he would no longer make public interventions on such subjects once he was king, declaring: “I’m not that stupid.”

He told the program he would not be “able to do the same things I’ve done as heir” and as monarch would have to operate within “constitutional parameters”.

As Head of State, the Queen has to remain strictly neutral regarding political matters. By convention, she does not vote but does have ceremonial and formal roles relating to the government of the United Kingdom. 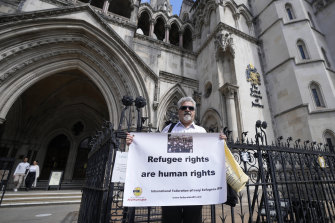 The Rwanda offshore detention issue is one of the most politically sensitive debates in the United Kingdom. A High Court challenge of the new policy was defeated last week. Credit:AP

Vernon Bogdanor, professor of government at King’s College, London, told the paper that the prince was in a different position from the Queen and while criticising a policy position in private was not problematic he must not do or say anything involving party politics.

“The only constraint is that he must not say anything which would embarrass the Queen,” he told The Times.