Assistant head at £22,000-a-year private school teacher is facing ruin after he was caught using his phone to spy on female colleague in women’s-only shower room, court hears

A private school teacher has this week been ordered to sign the Sex Offenders’ Register and complete 200 hours of community service after admitting to using his mobile phone to secretly spy on a female colleague in a women’s-only shower room.

Computer Science teacher Christopher Arnold, 37, was also an assistant head at £22,000 a year Hampton School, in south-west London, and also had a pastoral role in caring for students.

He pleaded guilty at Wimbledon Magistrates’ Court to observing the female teacher doing a private act, for the purpose of sexual gratification on March 23 of this year.

He is no longer employed at the 500 year-old school, which boasts famous alumni such as Queen guitarist Brian May, former Home Secretary Kenneth Baker and Olympic gold medal rower Jonny Searle.

Arnold, of Dyas Road, Sunbury-on-Thames is now receiving Jobseeker’s Allowance and living with him mum, while on a ‘relationship break’ from his partner, also a teacher at the same school. 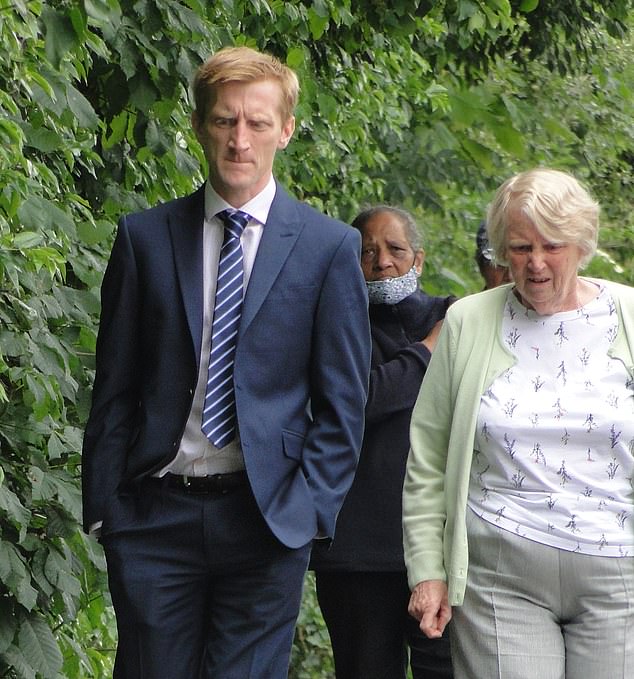 Christopher Arnold (left), 37, taught Computer Science and was an assistant head at Hampton School prior to the incident. He had been given a new role in pastoral care which his lawyer said ‘placed additional stress on him’ 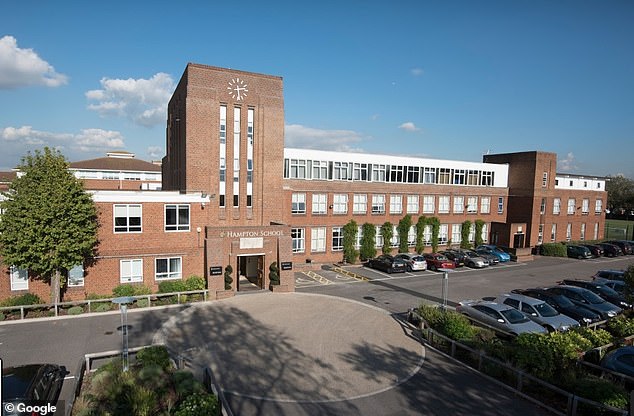 Hampton School is a boys-only independent school in south-west London, boasting famous alumni such as Brian May

The incident happened at Hampton Boys School prior to the beginning of the school day in the female-only shower area attached to the school’s gym.

Prosecutor Adam Cooper told the court: ‘The complainant was getting changed in the shower room at 8.10am and was sitting on a bench facing the door, which has three clear window slots.

‘She could see a black smart phone held against the window and shouted out as she was partly-dressed and ran out to the corridor, thinking it was a student, but found this defendant.’

Arnold was questioned by police on the day of the offence and admitted he was responsible.

No recording of his fellow-teacher was found on the phone or his other devices, including computers.

‘This incident left me very shaken and shocked,’ said the teacher in her victim impact statement.

‘It is a horrible thing to have happened and to have it carried out by a colleague makes it even more intruding.’

Arnold’s lawyer Sunvir Kaur told the court: ‘He has expressed deep remorse from the outset and is seeking and trying to get to the bottom for the reason for the offence.’

She added Arnold has sought help since the ‘spur of the moment’ incident and admitted to the victim immediately that he had been responsible when asked.

She added: ‘Mr Arnold was at a point of crisis when he committed the act and felt a sense of shame and had come to his senses as to what he had done.

‘Mr Arnold says he was under a lot of stress. It had been a difficult term at the school, where he had been for ten years and he used pornography to relieve his symptoms as a copying strategy.

‘He also had a new pastoral role at the school, which placed additional stress on him.’

Kaur added: ‘He showed exemplary character up to that morning, but now there will also be a hearing before the Teaching Regulation Agency and he is likely to be barred.’

Arnold’s partner and his mother supported him in court.

Magistrate Timothy Keay told the court that the offence ‘is so serious a custodial sentence could have been imposed’ – but the court opted for a community order instead.

Arnold must now sign the Sex Offenders’ Register for five years and complete 200 hours community service and pay £85 costs and a £395 victim surcharge.

The court also ordered him to attend thirty sessions of the Horizon sex offenders’ programme and up to thirty days of a Probation Service-ordered recommended activity requirement.