David Gilbert went to prison a revolutionary, raising his fist and scorning authorities who prosecuted him for an infamous 1981 armored truck robbery in which a guard and two police officers were killed.

Four decades later, advocates for the 76-year-old inmate’s release include San Francisco’s chief prosecutor, the son left behind at 14 months old when both his parents were arrested.

“As long as I can remember, I’ve known that the most likely scenario is that my father is going to die in prison,” said Chesa Boudin, sworn in as district attorney last year. 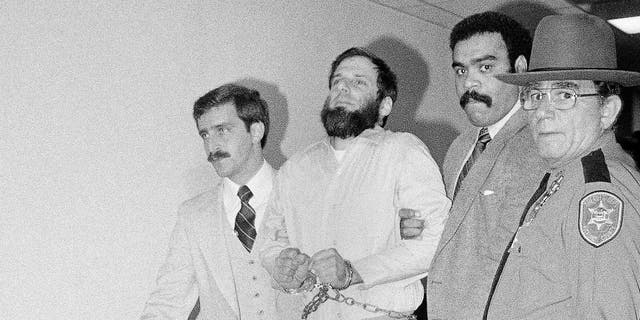 In this Nov. 23, 1981, file photo, Rockland County and others lead a handcuffed David Gilbert from Rockland County Court in New City, N.Y., after a hearing in Gilbert’s felony murder case. Gilbert was convicted of murder in the deaths of two Nyack police officers and a Brink’s guard during an infamous botched robbery considered one of the last gasps of ’60s radicalism. Gilbert’s son Chesa Boudin, now the San Francisco chief district attorney, and others are seeking clemency from New York Gov. Andrew Cuomo for Gilbert, now 76 and still imprisoned for the Oct. 20, 1981, robbery. The case is more pressing due to the increased risk of COVID-19 among prisoners. (AP Photo/David Handschuh, File)

Boudin ran a progressive campaign in which he said visiting his parents Kathy Boudin and Gilbert in prison showed him the criminal justice system was broken.

Gilbert is among the last surviving people still imprisoned in the bungled 1981 Brink’s robbery north of New York City, often seen as a last gasp of ’60s radicalism. The robbery still stirs emotions, especially among local officials and relatives of the slain men who have watched with exasperation as others convicted in the crime, including Kathy Boudin, walk out of prison.

US CAPITOL POLICE SUSPENDS 6 OFFICERS WITH PAY, INVESTIGATING 29 OTHERS OVER JAN. 6 RIOT

As one of many voices lobbying New York Gov. Andrew Cuomo, Chesa Boudin’s support for his father’s clemency is personal. But the case also revolves around questions of justice the Democrat and former public defender deals with as a district attorney.

“No matter whether my father lives the rest of his life in a cage or whether he’s released to spend his few remaining years with family, we can’t undo the harm that his crime cost. And we can’t bring back the men who were so wrongfully killed that day.” he said in a recent interview. “At what point is enough enough? I don’t know.” 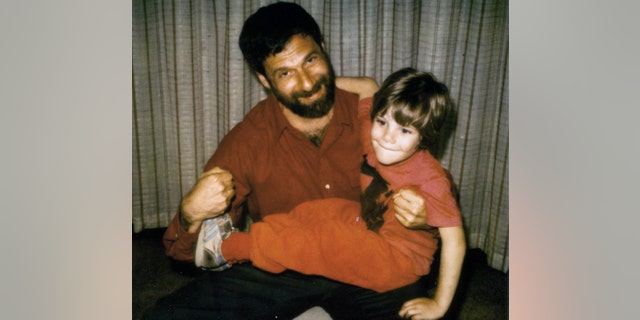 In this May 1985 photo provided by Chesa Boudin, Boudin’s father, David Gilbert, makes fists as he holds him during a prison visit at Auburn Correctional Facility in Auburn, N.Y. Gilbert, now 76, was convicted of felony murder in the Oct. 20, 1981, robbery of $1.6 million from an armored Brink’s truck at the Nanuet Mall north of New York City that resulted in the deaths of three people. Boudin, now San Francisco’s district attorney, and others are lobbying New York Gov. Andrew Cuomo for clemency for Gilbert, one of the oldest and longest-held inmates in New York state. (Courtesy of Chesa Boudin via AP)

Gilbert is serving a 75-year-to-life sentence at the Shawangunk Correctional Facility for the Oct. 20, 1981 robbery of $1.6 million from a Brink’s truck at a suburban Rockland County mall. He is eligible for parole in 2056.

Veterans of the Weather Underground, a militant group that grew out of the anti-Vietnam War movement, joined with members of the Black Liberation Army in a robbery they considered a justified “expropriation” to establish a Black nation in the South called the Republic of New Afrika.

HERO OF 1986 FBI SHOOTOUT ON HOW INCIDENT RESHAPED LAW ENFORCEMENT

Brink’s guard Peter Paige and two Nyack policemen, Sgt. Edward O’Grady and Officer Waverly Brown, were killed in the holdup and ensuing shootout at a nearby roadblock.

Gilbert, an unarmed getaway driver, was charged with robbery and murder since people were killed during the crime. He and two co-defendants cast themselves as freedom fighters and deemed their trial illegitimate. At one court session, Gilbert and co-defendant Judith Clark raised their fists and shouted “Free the land!” 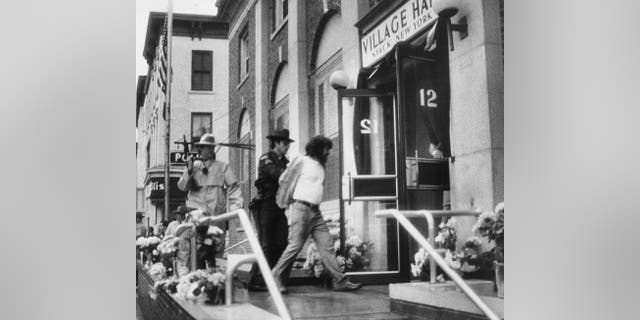 Steve Zeidman, the lawyer and CUNY School of Law professor spearheading the clemency campaign, said Gilbert has a spotless prison record and has helped fellow inmates since running an AIDS education program during that epidemic. Supporters of his release range from fellow inmates to former South African archbishop Desmond Tutu.

As COVID-19 spreads through New York’s prisons, Zeidman stressed that Gilbert is especially vulnerable as one of the system’s oldest and longest-serving inmates. Gilbert is eligible for the vaccine, though his son said he had yet to receive a shot.

Chesa Boudin was dropped off at a babysitter before the robbery and was later raised by his parents’ Weather Underground compatriots, Bill Ayers and Bernardine Dohrn. Growing up, his relationship with his biological parents was defined by phone calls and prison visits.

Boudin recalls Gilbert telling elaborate adventure stories on the phone starring the boy and his friends sailing down the Amazon River or in some other exotic locale. Each call would be an episode. Pictures taken at prison visits over the decades show a young boy with tousled hair grow into the bearded lawyer eventually elected DA. 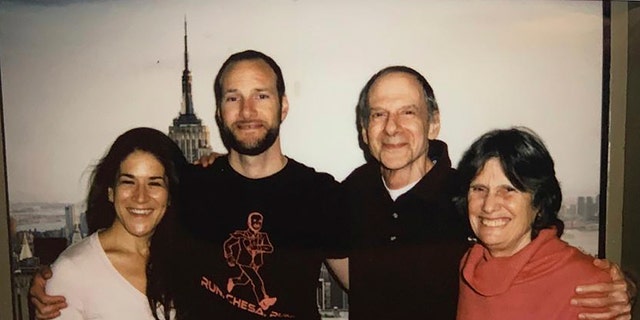 In this November 2019 file photo provided by Chesa Boudin, San Francisco District Attorney Chesa Boudin, second from left, is shown with his now-wife Valerie Block, far left, his father, David Gilbert, and mother, Kathy Boudin, right, at Wende Correctional Facility in Alden, N.Y. Gilbert, 76, is serving a 75 years-to-life sentence for an Oct. 20, 1981, Brink’s armored truck robbery in Rockland County, N.Y., that left a guard and two police officers dead nearly 40 years ago. San Francisco’s District Attorney, Boudin and other allies are lobbying New York Gov. Andrew Cuomo for Gilbert’s release stemming from an incident that was considered one of the last gasps of 1960s radicalism. (Courtesy of Chesa Boudin via AP)

Kathy Boudin avoided a harsher sentence by pleading guilty and was paroled in 2003. Clark was granted parole in 2019, three years after Cuomo commuted her sentence, noting her “exceptional strides in self-development.”

2 DALLAS OFFICERS SHOT AND WOUNDED WHILE RESPONDING TO CALL

John Hanchar, O’Grady’s nephew, asked why Gilbert’s case was worthy of public attention when so many inmates with lesser convictions get none. Hanchar contends Gilbert helped plan a crime that left a lasting hole in the lives of the slain men’s families.

“We’ve moved on with our lives. But fair is fair. If you want to say that this guy spent 40 years in prison and he’s going to leave an old man, I don’t care if he leaves tomorrow,” Hanchar said. “But don’t tell me that he didn’t kill these people.” 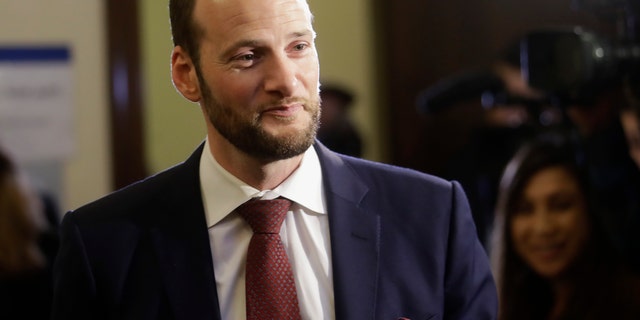 In this Wednesday, Jan. 8, 2020, file photo, San Francisco District Attorney Chesa Boudin speaks to reporters before his swearing-in ceremony in San Francisco. Boudin and others are seeking clemency from New York Gov. Andrew Cuomo for Boudin’s father, David Gilbert, 76, one of the last surviving figures still imprisoned in the infamous Oct. 20, 1981, Brink’s robbery, widely seen as a last gasp of ’60s radicalism. The long-shot campaign has taken on urgency with COVID-19 raging through New York’s prison system. Chesa Boudin was the 14-month-old son Gilbert and partner, Kathy Boudin, left behind at a babysitter in 1981, never to return. (AP Photo/Jeff Chiu, File)

There’s a separate effort to secure the release of former Black Liberation Army leader Mutulu Shakur, the 70-year-old stepfather of slain rapper Tupac Shakur. He is at a federal medical center in Kentucky and has advanced-stage bone marrow cancer. Shakur was convicted of leading a group responsible for a series of armed robberies in New York and Connecticut, including the Brink’s heist.

Zeidman, who also handled Clark’s case, said Gilbert’s case “kicked into high gear” with a clemency filing last year and they have since added supplemental material. Advocates hope Cuomo intervenes as he did with Clark, though clemencies for more serious crimes are rare among the state’s 33,000 inmates. The Democrat announced 14 pardons and seven commutations last Christmas Eve, a traditional time for announcements.

Zeidman said he has not received a formal decision from Cuomo’s administration.

Gilbert declined a request to answer questions about his role in the crime and arguments for his release that The Associated Press posed in a letter to him. Zeidman and Boudin describe Gilbert as remorseful and no threat to society.

“This is just a question about how do we balance retribution against other social interests,” Boudin said.