Choosing nicotine patches over quit smoking tablets does not reduce a person’s risk of heart attack or stroke, an Australian study has found, leading researchers to suggest the pills should be offered as a first line of treatment to people wanting to stop.

The new study, conducted by the National Drug and Alcohol Research Centre, used linked pharmaceutical dispensing, hospital and death records from people who received prescription quit smoking medicine between 2011 and 2015. 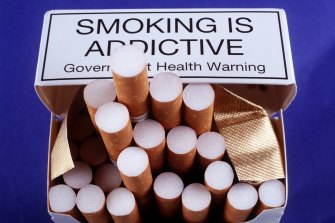 Studies show that quit smoking medication does not result in an increased likelihood of a major cardiac event.Credit:Quentin Jones

It found there was no difference in incidence of major adverse cardiovascular events, such as heart attack or stroke, in people who were prescribed the quit smoking pill varenicline, commonly known by the brand name as Champix, as opposed to those who were prescribed nicotine patches.

It also found there was a slightly reduced risk of death from a cardiovascular event in people who were prescribed varenicline as opposed to nicotine patches.

Lead author Dr Alys Havard said, although decade-old international research had suggested varenicline increased a person’s risk of serious cardiac problems, this population study added to growing evidence this is not the case.

“With the cardiovascular effects, the evidence was always a bit inconsistent – some studies found there was a small increased risks and others didn’t,” she said.

Dr Havard said, given smoking was a risk factor for cardiac problems, the study made clear people should not hesitate to take prescribed medicine to assist them to quit.

“It is important to remember that these medicines are being offered to people who have often tried other things, tried to go cold turkey – it’s about relative risk rather than absolute,” she said, adding that quit smoking pills, which have been shown to be more effective than patches in clinical trials, should be offered to anyone who wants to stop.

“Because varenicline is more effective than NRT (nicotine replacement therapy), this should have a downstream effect of more smoking cessation.”

Evidence is mounting that smoking cessation medicines are safer than initially thought. In recent years, the US Food and Drugs Administration has downgraded its warning for adverse psychiatric effects for varenicline, which were previously required to be listed on the box.

Last year, Dr Havard released an analysis which showed both pills and patches used by women to quit while pregnant did not put their babies at higher risk of complications.

“Smoking damages your heart as well as your lungs and increases your risk of hospitalisation or death from most types of heart, stroke and vascular diseases,” he said.

Dr Havard said the next stage of the research would be looking at whether smoking cessation medicine can prevent further cardiac events in people with a history of complications.