Burglars raided Raheem Sterling’s £6m mansion when no one was at home and stole ‘£300,000’ of watches and jewellery, say police – after it emerged England star’s teammates were told of break-in hours before World Cup kick off

Police today gave new details about the burglary on England star Raheem Sterling’s home, revealing that his wife and children were not inside at the time and ‘no threat of violence was involved’.

Thieves broke into the father of three’s £6million gated home in Surrey on Saturday night before making off with a reported £300,000 worth of watches – prompting the shocked star to race home from Qatar to be with his family.

There had been reports that his partner, Paige Milian, 27, was inside the house with her three children. However, a statement issued by Surrey Police this morning suggested she arrived home some time after the burglary.

Detectives are now investigating the raid – which Sterling’s England teammates were informed of in a team meeting yesterday just hours before kick-off against Senegal – but have not yet made any arrests. It’s the second time the star has been targeted, with thieves also attempting to burgle his home in Cheshire four years ago.

Raheem Sterling’s partner Paige and their three children were not inside their home at the time of the raid, police said today 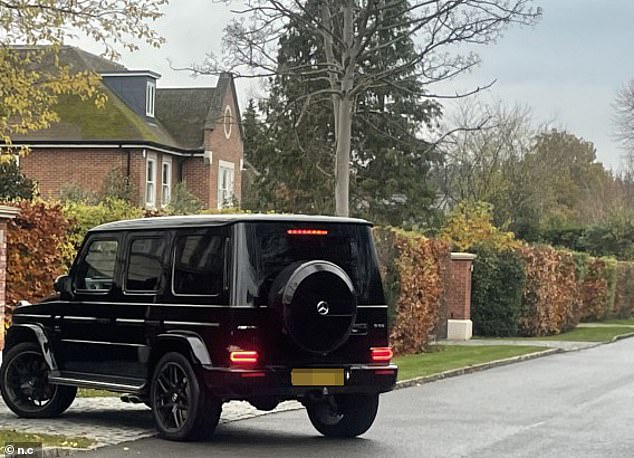 Surrey Police said: ‘We are currently investigating a report of a burglary.

‘Police were contacted just before 9pm on Saturday December 3 after the occupants of the property came home and discovered a number of items including jewellery and watches had been stolen.

‘Enquiries to establish the circumstances are underway and the investigation is ongoing.

‘No threat of violence was involved as the items were discovered stolen retrospectively. Enquiries into the circumstances are ongoing.’

A 2018 burglary on Sterling’s house in Cheshire when he was playing for Man City prompted him to buy a £15,000 Rottweiler guard dog called Okan and enlist a 24/7 security team.

Many of Sterling’s teammates are understood to be considering increasing their own levels of personal protection, with the horrific incident being the latest in a string of burglaries on footballer’s homes.

Sterling has three children: his daughter, and eldest, Melody Rose, as well as two sons, Thiago and Thai.

Last month Stoke City defender Josh Tymon appealed for help after thugs stole ‘everything of value’ from his house in Knutsford, Cheshire, including watches, bags, shoes, jewellery and a Range Rover Sport SVR.

Liverpool ace Alex Oxlade-Chamberlain and his fiancée Perrie Edwards were targeted in September, with a gang bursting into their £3.5million Cheshire property while they were with their 13-year-old son.

In April, a 31-year-old man was arrested after Chelsea star Reece James had a safe stolen from his house in Surrey. James, 21, said robbers struck in September and made off with his Champions League, Super Cup and Euro 2020 medals. 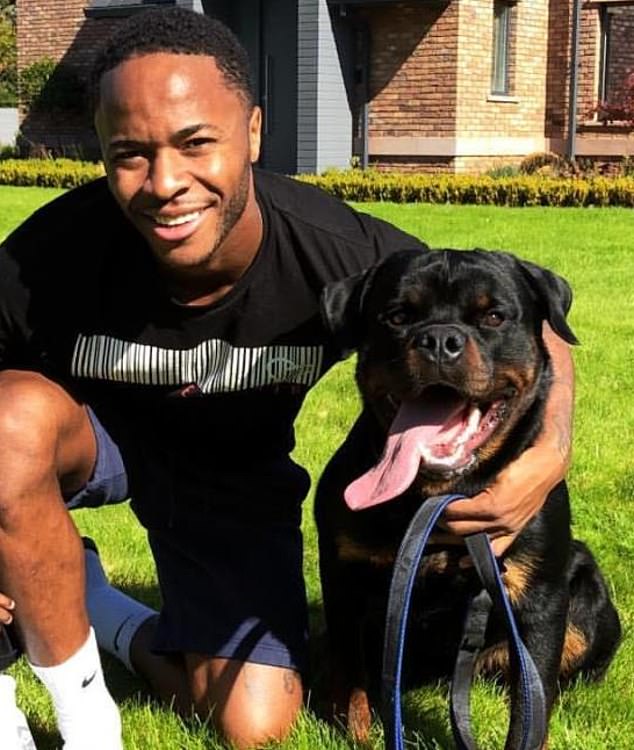 Sterling was forced to splash out £15,000 on a Rottweiler guard dog named Okan after an earlier raid on his home in Cheshire

Last month Stoke City defender Josh Tymon appealed for help after thugs stole ‘everything of value’ from his house in Knutsford, Cheshire, including watches, bags, shoes, jewellery and a Range Rover Sport SVR. He and his girlfriend, Courtney Moxon, 24, were not at home 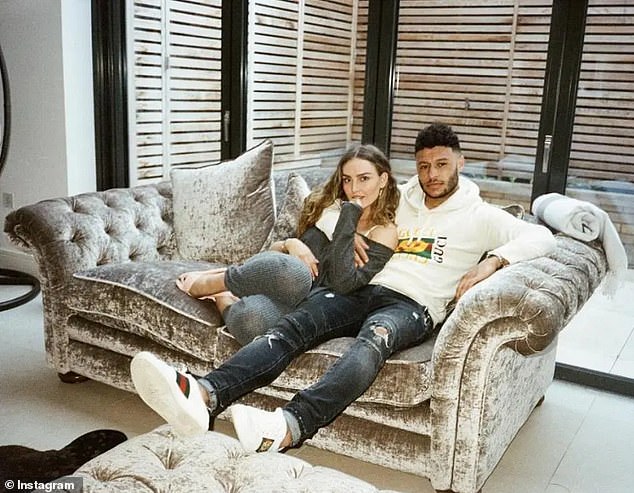 Liverpool ace Alex Oxlade-Chamberlain and his fiancée Perrie Edwards were targeted in September, with a gang bursting into their £3.5million Cheshire property while they were with their 13-year-old son 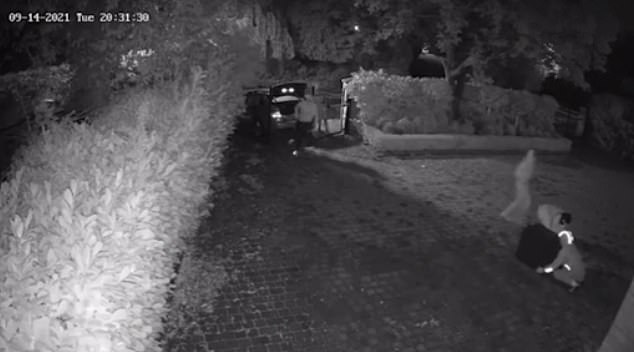 In April, a 31-year-old man was arrested after Chelsea star Reece James had a safe stolen from his house in Surrey. This is the moment thieves struck 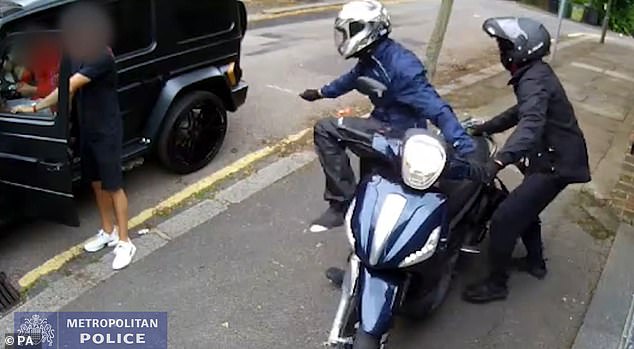 Back in 2021, a gang were jailed for 100 years for carrying out a string of violent robberies, including a horrific 2019 ambush on Arsenal players Mezut Ozil and Sead Kolasinac outside a London restaurant

Sterling was last targeted in 2018 when he played for Manchester City and lived in Cheshire. But the gang were scared away when the alarm system was activated and left empty-handed.

In 2020, Thomas Mee, Vincent Ball, and John Barlow, all from Liverpool, were jailed over the raid. They’d also targeted other high-profile figures including Jamiroquai singer Jay Kay.

A year later, a gang were jailed for 100 years for carrying out a string of violent robberies, including a horrific 2019 ambush on Arsenal players Mezut Ozil and Sead Kolasinac outside a London restaurant.

Most of the players’ WAGs were in the Al Bayt Stadium for England’s comfortable 3-0 win over Senegal on Sunday.

However, many have been flying back and forth from Qatar during the tournament to juggle their own careers as well as looking after young children.

Sterling’s partner Paige Milian posted pictures on a cruise ship in Doha before the Iran game last month, but was back in the UK at the time of the raid on Saturday.

A statement released 90 minutes before kick off last night revealed that Sterling – one of Gareth Southgate’s most trusted lieutenants in major tournaments – would miss the last 16 clash to deal with a ‘family matter’.

News of Sterling’s omission, and the shocking circumstances that caused it, was not relayed to the players until the team meeting just prior to leaving for the Al Bayt Stadium.

Southgate confirmed the winger would be leaving the camp to fly back to the UK, but didn’t set a timescale on when he was expected back.

Around £300,000 of watches are thought to have been stolen in the raid, a family source told the Sun. 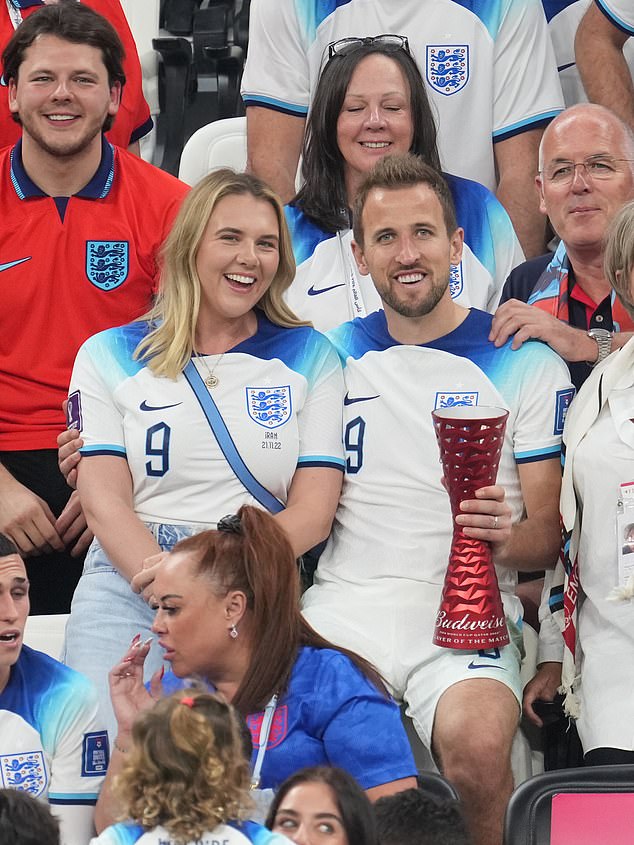 Most of the players’ WAGs were in the Al Bayt Stadium for England’s comfortable 3-0 win over Senegal on Sunday. Pictured: Harry Kane and wife Katie Goodland 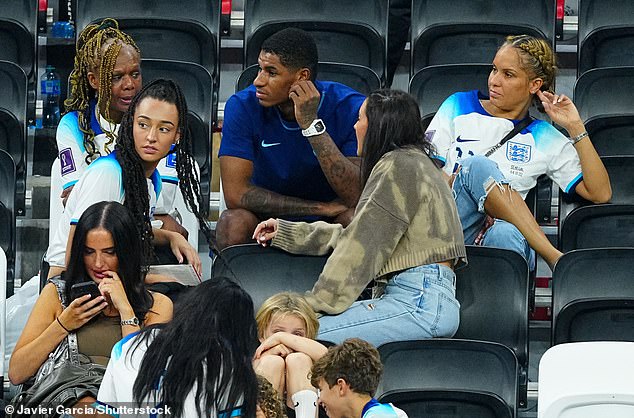 Locals told MailOnline that police investigating the burglary had been and gone from the scene, and that security had been patrolling late into the night.

While it is not known if and when Sterling will return to the England camp, he has been determined to play a pivotal role in their quest to win the World Cup for the first time since 1996 and only the wellbeing of his children has pushed him to take the decision to leave the rest of the squad to fly home.

Speaking after the Three Lions’ victory over Senegal, Southgate said of Sterling: ‘The priority for him is to be with his family.

‘We’re going to support that and leave him to have as much time as he needs.

‘He’s going home. I don’t want to put him under pressure. Sometimes football isn’t the most important thing, family should come first.’

England’s captain, Harry Kane, said: ‘Our thoughts are with him and his family. It’s a private matter but it’s never easy to see one of your teammates and friends deal with something like that. 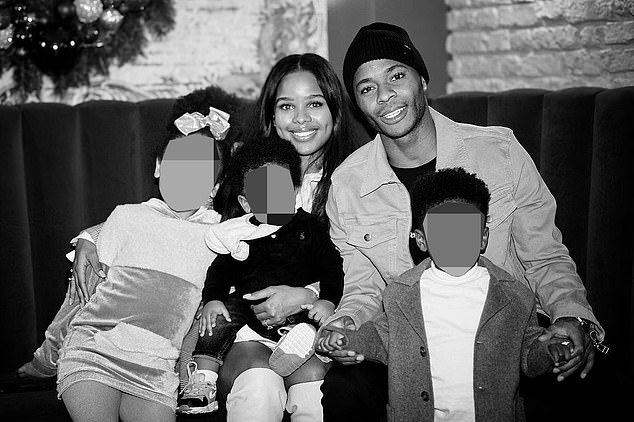 ‘We’ll have to take it day by day. I’m sure Raheem will speak to the manager and take the best decision for him an his family. That’s the most important thing. We send him our best wishes and hope to see him as soon as possible.’

Jordan Henderson appeared to make a subtle gesture of support to his teammate by wearing the star’s No10 shorts when the players met up with their families in the stands after full time.

He added: ‘It’s a blow but I hope everything is OK with Raheem’s family at home. I hope he goes back and can sort everything out.

‘I’m not sure if he can come back, I suppose he will have to assess when he’s there but all our thoughts and support are with him.’

Other former players also lent their support, as Gary Lineker tweeted: ‘Thoughts are with @sterling7 and his family after their awful and harrowing ordeal.’

It remains unclear if he will play any further part for England in Qatar, ahead of their quarter-final with France on Saturday night. 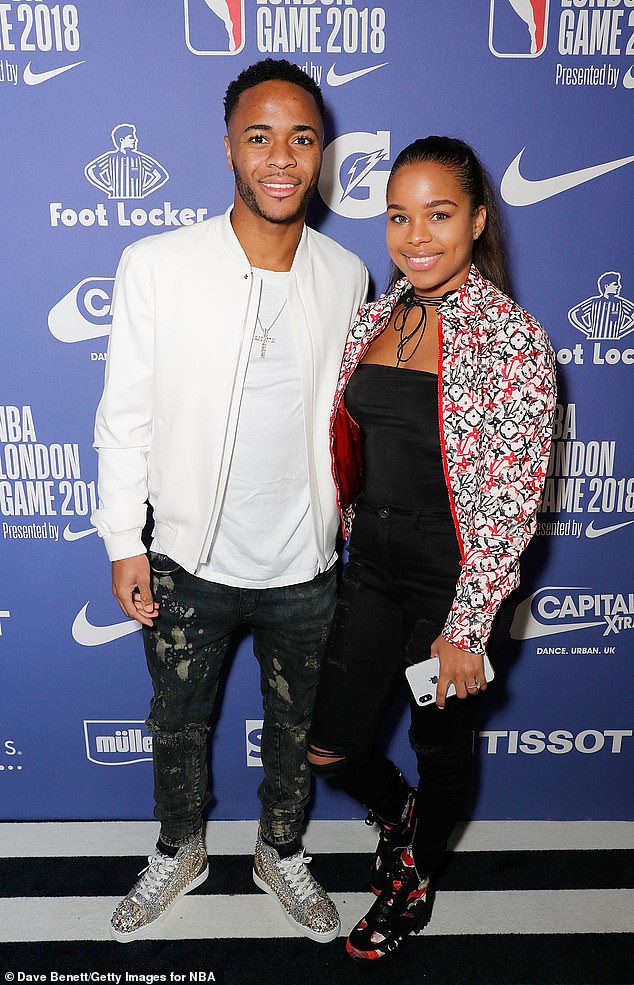 There have been several other raids on high-profile footballers in recent years.

Earlier this year, a court heard how former Arsenal and Chelsea star Ashley Cole accepted ‘I am going to die’ as masked raiders smashed into his home, binding his hands as he held his young daughter.

The legendary defender revealed how four men broke into his Surrey home in January 2020 as he watched Netflix.

The masked gang were about to torture the former player by cutting off his fingers with electricians pliers when police suddenly arrived and they fled.

They had prepared him for the ordeal by dragging him downstairs and making him think they were going to throw acid on his face or burn him alive.

Meanwhile, Manchester United said this year they would review security after young star Tahith Chong was burgled at knifepoint at his home – the fourth player to to be raided in recent months.

Chong was at home in Sale, Greater Manchester recovering from a groin injury in January when three balaclava-clad men reportedly broke in and ‘held blades to his throat’.

The footballer was asleep when the thugs broke in at around 3am on January 16 and they took items including watches and jewellery.

They also reportedly mocked his lack of security during the terrifying raid.

Chong was the fourth Manchester United star to have his home burgled in recent months, after Paul Pogba, Victor Lindelof and Jesse Lingard.

Manchester City star Joao Cancelo was also the victim of a robbery, with the defender sharing photos of his bruised face after thugs struck him during the raid on his home. 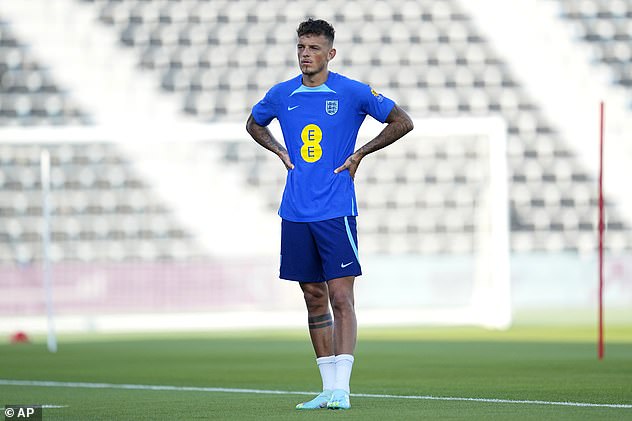 England have been in Qatar for almost three weeks and Sterling started their opening games against Iran and USA, scoring in the first and playing a total of 139 minutes across the two fixtures.

He was an unused substitute as Southgate made changes for the final group game against Wales.

On Wednesday, England confirmed that defender Ben White had left the group and flown home due to a personal matter.

The FA confirmed the Arsenal defender, who was yet to feature for Gareth Southgate’s side in Qatar, left the team’s training camp in Al Wakrah.

Their statement added that White was not expected to return to Qatar.

‘Ben White has left England’s training base in Al Wakrah and returned home for personal reasons,’ read the statement.

‘The Arsenal defender is not expected to return to the squad for the remainder of the tournament.

‘We ask that the player’s privacy is respected at this moment in time.’

His club Arsenal on Wednesday night tweeted: ‘We’re all with you, Ben.’

England took on African champions Senegal on Sunday in the last-16 in the knowledge that victory would set up a glamour quarter-final with France on Saturday, after they defeated Poland 3-1 earlier in the day.

Southgate made one change from the rout of Wales, replacing two-goal scorer Rashford with Saka.

England looked shaky in the early stages but soon found their groove as goals from Jordan Henderson, Harry Kane and Saka ensured victory.