In mid-August, when the Carolina Panthers were preparing to name Baker Mayfield as their starting quarterback, a high-ranking member of the team’s braintrust had an uncomplicated bottom line for the 2022 season. It was one simple thing to get the former No. 1 overall draft pick back on track toward a promising career as an NFL starter.

“Is he going to be an All-Pro here? Probably not,” the Panthers source said. “But he doesn’t have to be. He doesn’t have to be great. He just has to take advantage of the guys around him. If he can do that, I think he can be [a long-term answer at quarterback].”

Once a hopeful franchise centerpiece, Mayfield headed to waivers this week from Carolina as a journeyman quarterback looking for any chance. On Tuesday, the Los Angeles Rams gave it to him, claiming Mayfield for the final month of the regular season and potentially giving him an opportunity to put together some helpful film before hitting free agency in March. 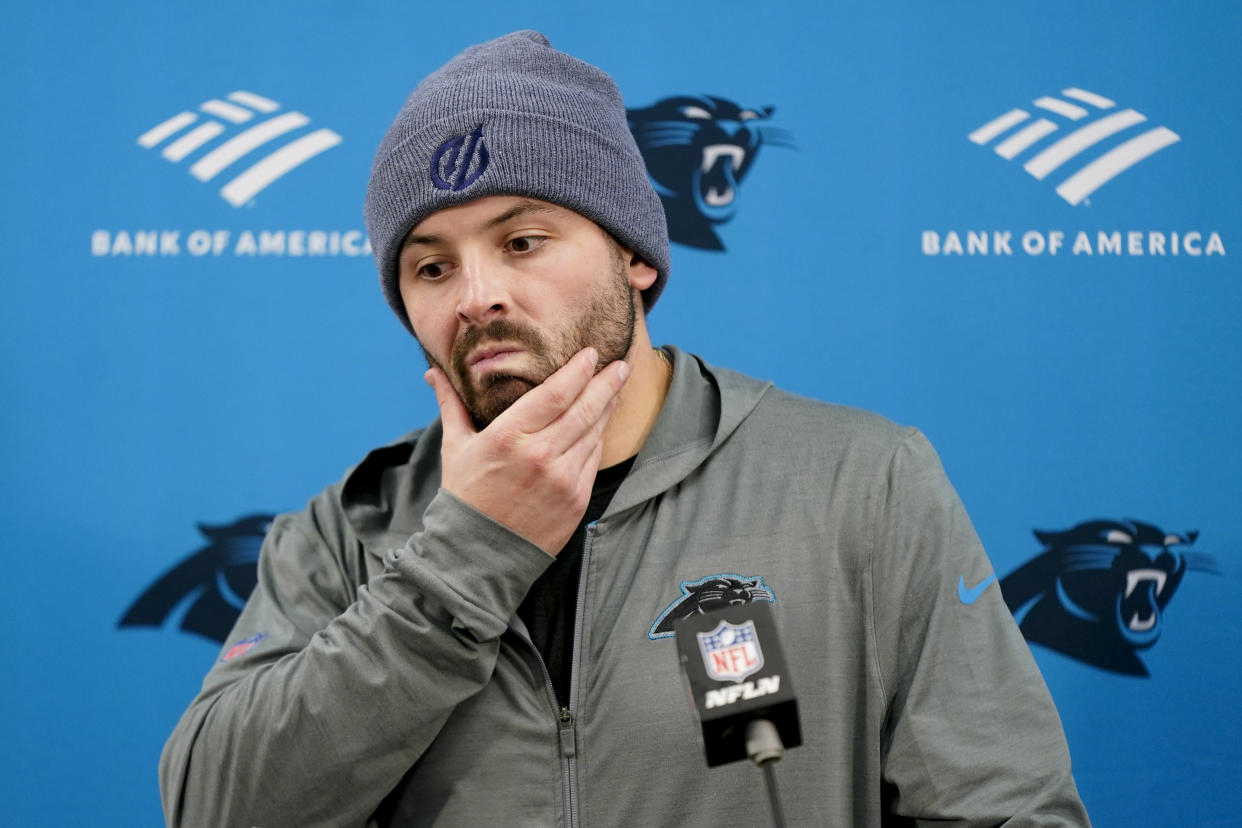 How did Mayfield get here? His primary hurdles to modest expectations in Carolina had everything to do with it. Could Mayfield stay healthy? Could he be the confident player he was early in his career? And most important, could he be consistent and accurate?

The answers took only six starts and seven total games to draw a summary judgement. Mayfield was ultimately benched twice, with the questions being answered when the Panthers turned the offense back over to Sam Darnold. Mayfield wasn’t reverting back to what he was as a rookie in 2018, when his accuracy and confidence to make off-schedule throws made him a budding star. And he certainly wasn’t recapturing the pockets of brilliance from 2020 — a seemingly defining moment in his career that had the Browns contemplating a significant contract extension offer.

Looking back now and comparing those heights with his endings in Cleveland and Carolina, it’s clear that the peaks were the outliers. Everything else was a regression to the mean, showcasing a five-year start to Mayfield’s career that now puts him in a distinct fraternity.

This will likely be a humbling moment for Mayfield, who is expected to be floating around in free agency with two other once-coveted first-round draft picks from his 2018 class: Darnold, who was the No. 3 overall pick and Josh Rosen, the No. 10 pick who has been without a team since the Browns cut him from their practice squad in October. That trio will be joined by other familiar flameouts expected to be cut loose due to salary considerations next season. A group that is expected to include 2015 No. 1 overall pick Jameis Winston and three No. 2 overall picks from previous drafts, including the Pittsburgh Steelers’ Mitchell Trubisky, the Atlanta Falcons’ Marcus Mariota and the Washington Commanders’ Carson Wentz.

That’s a lot of carnage. It’s also a group that should spell out the mountain Mayfield must climb. Along with Mayfield, every single one of those players is potentially headed for their third or fourth different team in free agency. Rosen has already been on and off the roster of an incomprehensible six franchises. The underlying theme being that once teams identify significant flaws in a quarterback’s game, talent and a high draft slot gets that player only so far in the NFL. It can get very cold very fast, with opportunities that quickly devolve into a series of one-year looks and little else.

This is what Mayfield is facing now.

One executive who studied Mayfield closely said Monday night, “In some ways, he’s similar to Carson Wentz. His arm is legitimate, but physically he’s trying to play like he’s a better athlete than he is at this point in his career. He makes some high-end throws that are highlights, but they get outweighed by a lot of mistakes.

"I wonder about his confidence, too. … He just looks like he’s kind of an undersized guy who isn’t seeing the field well from the pocket," the executive said. "He’s not as mobile as maybe he was a few years ago and he’s not athletic enough to make the off-schedule throws that top-level quarterbacks make.”

Time will tell if the Rams can fix that assessment. Head coach Sean McVay is a perennial believer in his ability to coach up quarterbacks. And there’s little arguing Mayfield has a better résumé and more experience than John Wolford and Bryce Perkins.

It’s also worth remembering that McVay’s biggest frustration before trading for Matthew Stafford were Jared Goff's limitations and mistakes.

There is overlap there with a player like Mayfield. What there isn’t is risk. The Rams have little to lose at this point and Mayfield doesn’t carry the franchise quarterback deal that Goff dragged onto the field when he was flaming out in Los Angeles. The Rams also had options at that point, along with a Super Bowl window. They have neither in the remainder of 2022.

That gives them something in common with Mayfield. And it’s enough to drive this one last shot at turning around a career that’s plummeting fast.