Random thoughts from (a lot) of airport lounges

Jakarta: On Thursday, while sitting at Jakarta’s Soekarno-Hatta airport, a colleague posted on Facebook about a nightmare experience she was having at Melbourne’s Tullamarine airport.

I, along with a lot of others, expressed my sympathy. Who hasn’t had an awful airport experience? 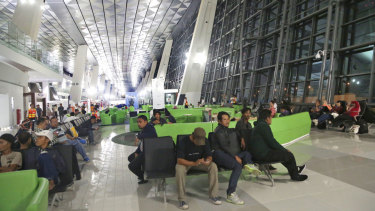 Passengers wait for their flights on the first day of operation of a new aiport terminal in Jakarta in 2016.Credit:AP

I spend rather more time in airports, and on planes, than most. While killing time in Bangkok’s Suvarnabhumi airport waiting for a delayed flight to Chiang Rai recently, I started a spreadsheet to work out exactly how much time.

It turns out that, by mid-June, I will have taken 89 flights, or one about every six days, for 18 months. It’s one of the less exciting aspects of my job (using squat toilets and wearing the same dirty clothes for days on end are also up there).

But it gives me plenty of time to think, and observe. My airport experiences have veered from the mundane to the utterly tragic.

Don Mueang, the budget airline airport in Bangkok that I usually fly through, is terrible. It’s crowded, the range of food on offer is very limited, both the news stand and duty-free offerings are minimal, it’s ancient and the gates from which planes depart frequently change, meaning you are regularly traipsing back and forth. The only highlight is a reasonably sized children’s play area.

Terminal 2 at Jakarta’s Soekarno-Hatta airport is not far behind Don Mueang. It suffers in comparison to the sprawling, shiny new terminal 3 (you’ll love T3 if you count steps). But terminal 2 it is ageing and has limited food and duty-free options.

I’m pretty confident that a recently announced plan to make T2 a budget-airline-only terminal – by halving the number of check-in counters, removing duty free and TURNING OFF the air-conditioning (remember, Jakarta’s temperature permanently hovers between 28-32 degrees) will make it the worst terminal in South-East Asia. I’m very confident in predicting I’ll try never to fly from T2 again.

Third worst place goes to Dhaka’s airport, which is disorganised, has few shops selling anything you’d ever want to buy, and guards walking around with machine guns that add a certain frisson I could do without.

The best experience? Singapore, hands down. Everything just works.

Phnom Penh’s airport is relatively modern, the ATMs all dispense US dollars (no one seems to use the local currency) but it loses points because of the visa-on-arrival procedures. If you don’t have a passport-sized photo and $US35 ($50), prepare to wait around for a while.

Kuala Lumpur is more than serviceable, too, but of the best airports, I’m giving Chiang Rai third place. It’s small, old, disorganised and the food and shopping options aren’t much good. But none of that matters. It has an old-school charm, it’s the gateway to a spectacularly beautiful part of Thailand that more people should visit, and it’s small enough that everything gets sorted with a minimum of fuss.

But good or bad, airports are places where partings and arrivals occur, where people are grieving or elated. And, on two occasions, they've been the places where I've seen traumatised people desperate to escape.

The first was upon landing in the Indonesian city of Palu a couple of days after the earthquake and tsunami hit the region. The devastation was visible from the air. The cracks were obvious on the runway and the terminal building was partially collapsed.

The locals, many of whom were seriously injured, were trying desperately to get on any flight out.

I had never seen anything like it, and I hope I never do again. At the end of a week there, like hundreds of others, I spent more than 24 hours at the airport trying to get a flight out.

The 7am flight I’d booked was taken by a group of passengers who were supposed to be on the previous day’s 7am flight. The backlog the airlines had to clear was massive, and the staff were doing it without properly working computer systems.

Like hundreds of others, I slept on the grounds of the airport to try my luck the next day. My bed was a concrete slab outside a broken toilet block, my groundsheet an unused body bag that a rescue team had given me.

After again being knocked back again for a commercial flight, a friendly airport official got me onto a small, eight-seater charter plane to the tiny town of Mamuju, just down the coast. I was very lucky and very thankful.

Then there was Mataram, the capital of Lombok, where I arrived the morning after an earthquake struck. There is something surreal about walking in through a damaged arrivals hall to a scene of chaos and hundreds of locals and tourists trying to flee.

I remember the look of horror on the face of a woman who I had stopped to interview. The first thing she said to me, upon hearing my accent, was that a counter to help Australians was just over that way. ''I’m just arriving, I’m not leaving,'' I said.

These are the moments I remember when I’m stuck in transit.