A woman who died after giving birth at home might have suffered a rare, unforeseen complication that provided only a small chance of survival, a court has heard in evidence that contradicted that of other medical experts.

Caroline Lovell’s health declined within an hour of giving birth to a healthy baby girl on January 23, 2012, in an inflatable pool at her home in Melbourne’s northern suburbs, and she collapsed and went into cardiac arrest. The 36-year-old died in hospital 14 hours later. 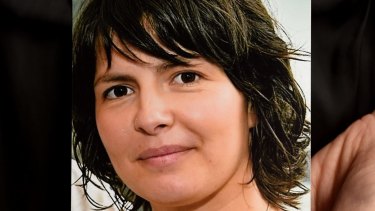 Midwives Gaye Demanuele and Melody Bourne, who oversaw the home birth, were last year charged with manslaughter. On Thursday, they were at Melbourne Magistrates Court for a hearing to determine if they will need to stand trial.

The medical experts who gave evidence at the women’s hearing last month said Ms Lovell suffered a postpartum haemorrhage, likely linked to a tear she experienced during the birth. Prosecutors allege the midwives were criminally negligent in failing to recognise or react to Ms Lovell’s deterioration.

But John Cade, a professor of intensive care medicine, told the court on Thursday that Ms Lovell probably suffered an amniotic fluid embolism (AFE) – where amniotic liquid enters a mother’s bloodstream – that would have been difficult to detect, leaving her in danger unless she had immediate access to intensive care. 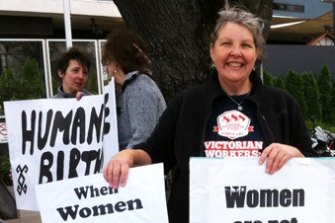 Professor Cade said the embolism caused Ms Lovell’s haemorrhage, and he stood by the opinion he held when testifying at her inquest in 2014. The court heard he encountered a case of AFE the day before he gave evidence at the inquest.

“An amniotic fluid embolism was the cause of death for Caroline Lovell,” he said on Thursday.

Examples of amniotic fluid embolisms are rare. Professor Cade said they might be as uncommon as one in every 8000 births, which meant, even in a big hospital, they might occur just once a year. 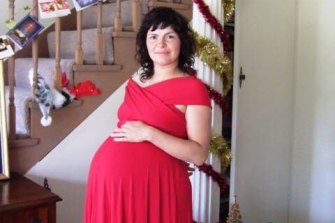 Caroline Lovell during her pregnancy.

However, of the 500 “obstetric disasters” he had seen – where a mother was rushed to intensive care – he estimated an AFE was present between 5 and 10 per cent of those cases.

The complication would be difficult to detect for someone who had never seen one, he said, and while he had “systematically excluded” other potential causes of death, the presence of an AFE could not be discounted.

Professor Cade said there was a 90 per cent survival rate for mothers who experienced an AFE in a hospital setting, but he agreed with Ms Bourne’s barrister, Robert Richter, QC, who asked if the prospects would be “quite grim” for someone who gave birth at home, without immediate access to intensive care. Mr Richter conceded the midwives missed the “narrow window” of detecting signs of an embolism in Ms Lovell.

“That would indeed be challenging,” Professor Cade said. “The window of opportunity, in this case, was really quite small.”

Professor Cade said the symptoms Ms Lovell showed in the hour after she gave birth – anxiety, agitation, a sense of doom, “feeling dreadful” and shortness of breath – were all typical of an amniotic fluid embolism. In analysing the case, he had not seen anything to suggest the midwives were not careful, caring and sympathetic to the mother.