ALISON BOSHOFF: It was the pantomime curtsy that REALLY sent Britain over the edge! But Meghan’s not averse to receiving one

No element of the first three hours of the Harry & Meghan documentary series has inspired more astonishment and outrage than the moment the Duchess of Sussex recreated her curtsy to the late Queen.

On the Netflix show, Meghan grinned broadly as she performed the gesture, bowing her head to her knees, spreading her arms theatrically wide in a display of mock servility.

Harry, for his part, looks stony-faced — and not a little embarrassed.

In response to the MailOnline story about the incident, readers have not held back — amassing 8,700 comments by the time the Mail went to press last night.

As detailed below, the vast majority of them express deep disappointment at Meghan’s ‘childishness’ and ‘disrespect’ . . .

Congratulations to the film crew. This really is a classic TV moment. While she shows her complete lack of class, ridiculing royal protocol by pretending to curtsy while sitting on a settee, she is totally oblivious to the complete embarrassment in Harry’s face. 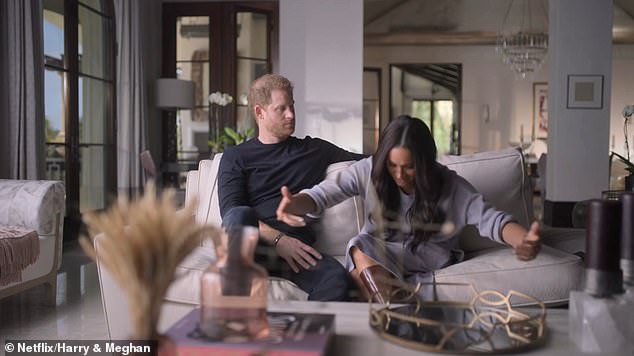 On the Netflix show, Meghan grinned broadly as she performed the gesture, bowing her head to her knees, spreading her arms theatrically wide in a display of mock servility 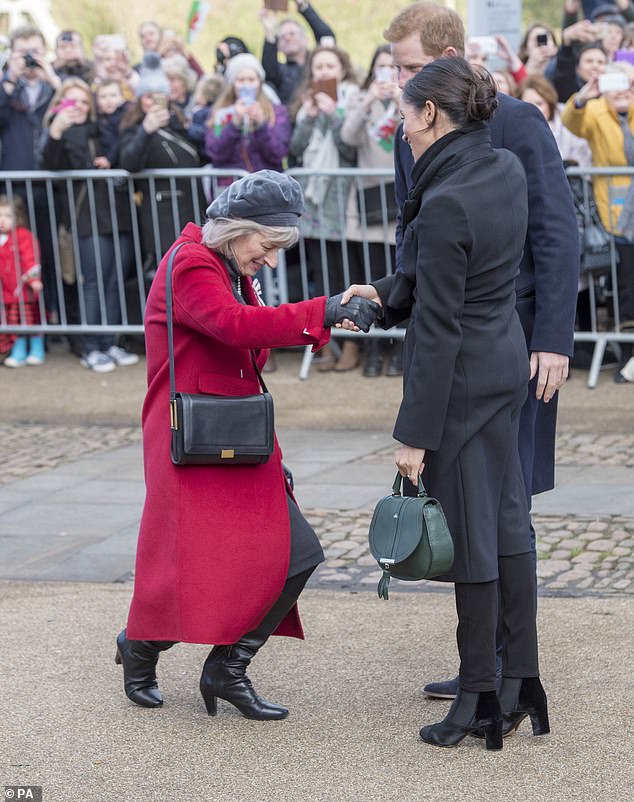 But Meghan, while a working royal was not adverse to accepting a curtsey herself, pictured here greeting the Lord-Lieutenant of South Glamorgan, Mrs Morfudd Meridith during a visit to Cardiff Castle in January 2018

That hammed up curtsy was such a huge and direct insult to the memory of our Queen and the monarchy in general. Unforgivable.

How can this man, born into British royalty, allow his actress wife to ridicule his grandmother, our beloved late Queen, in such a nasty way? No one has ever bowed or curtsied to the Queen or to King Charles in such a way. This man needs to grow a pair.

Watching Meghan mock the Queen made me feel quite sick. Thankfully, not all Americans show such disdain for the UK, and especially the Royal Family. Michelle Obama, who is far more revered in the world, showed respect for the monarchy. To watch Harry just sit there during Meghan’s exaggerated curtsy is disgusting.

She might think it’s ridiculous — and, indeed, it might be — but curtsying is an act of respect steeped in years of tradition. I guess some traditions she just couldn’t grasp, while others she could, such as private security, a big clothing allowance and titles.

Too dense to understand that the curtsy or bow is to the crown and not the individual — and that’s just Harry.

Harry, how could you sit there and watch her show such disrespect to the Queen, mimicking a pantomime curtsy? Your Queen, your ‘Commander in Chief’, your ‘Gran’? It sickened me.

So this woman spent her life in drama classes, auditioning for Hallmark movies and, by her own words, watching The Princess Diaries — and I daresay watching Disney, as she knew all about The Little Mermaid — and she didn’t know how to curtsy. And she’s supposed to be the intelligent one. Even three-year-old kids know how to curtsy.

Thinking of Mrs [sic] Markle’s curtsy in front of Her Majesty’s casket, exaggerated to such an extent that one feared she might break her hip, made me wonder back then: ‘Is she genuine or doing a parody? Is she mocking the Queen in front of the eyes of millions of people?’

I gave her the benefit of the doubt back then. I guess I was wrong.

Meghan expected people to curtsy to her as Duchess. It’s the same old story of Meghan wanting to be top of the tree and treated like the princess she believes she is.

How self-obsessed and entitled do you have to be — and, I might add, lacking in common courtesy — to mock the British tradition of paying homage to the monarch with a bow or a curtsy? The Americans won’t stand it if we mock or deride their institutions or traditions — as Harry found out when he called their First Amendment bonkers.

Who do Harry and Meghan think they are? Let us hope that this docu-drama, which is even more a work of fiction as recent episodes of The Crown, will mark the beginning of their descent into disgrace and then obscurity.

I don’t know which is worse, Meghan mocking the late Queen, or Harry allowing Meghan to do so before his own eyes! 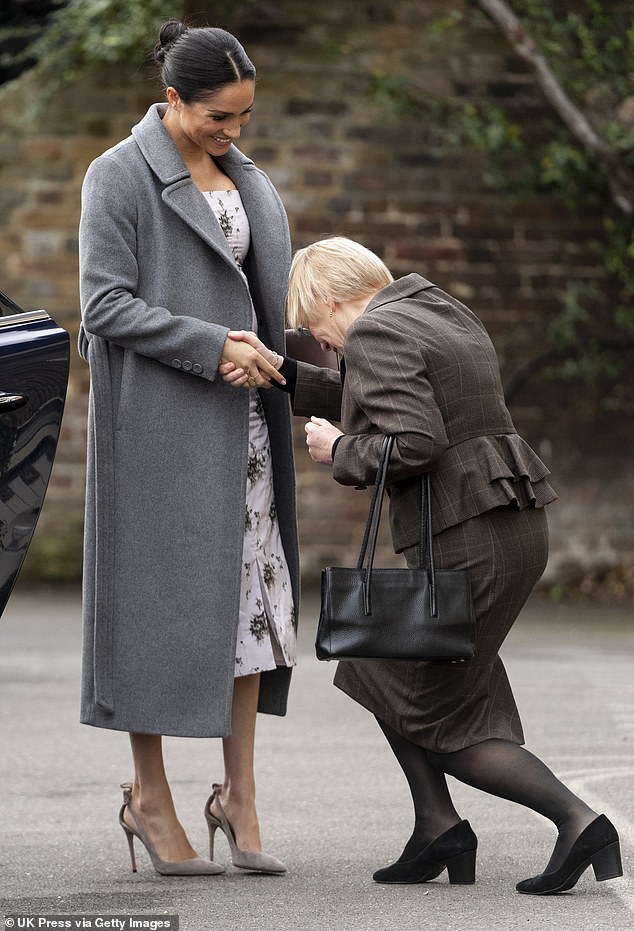 In December 2018, Meghan receives a curtsy during a visit to the Royal Variety Charity residential and nursing care home in Brinsworth House, Twickenham

One curtsys from a standing position. She’s demonstrating a theatrical bow and being thoroughly disrespectful while Harry smiles beside her. Utterly disgraceful.

I wonder if Harry ever wakes up, looks at her and thinks: ‘What the hell have I done?’ While she sits there, mocking a curtsy, he sits there with no expression. That supports the idea that he agrees with what she’s doing.

The curtsy comments are so obviously an attempt to turn a gesture of respect towards Her Majesty into a pantomime. It’s just good manners when you are guests in the Palace. There’s no need to make a big issue out of it. So childish.

Whether or not curtsying to the Queen at a private lunch when first meeting her is strange, that is not the point. Firstly, every member of the family does this, including her own daughter (as was exemplified by her curtsy as the Queen’s coffin passed by).

Secondly, a woman of the late Queen’s age is the ultimate matriarch in virtually all societies. Such a lady is head of any family and due deference should be shown, whether queen or pauper.

For Harry not to pull Meghan up for mocking this etiquette is bad enough, but for Meghan to make fun of her first ever meeting with the Queen is atrocious. Say nothing or show respect always. 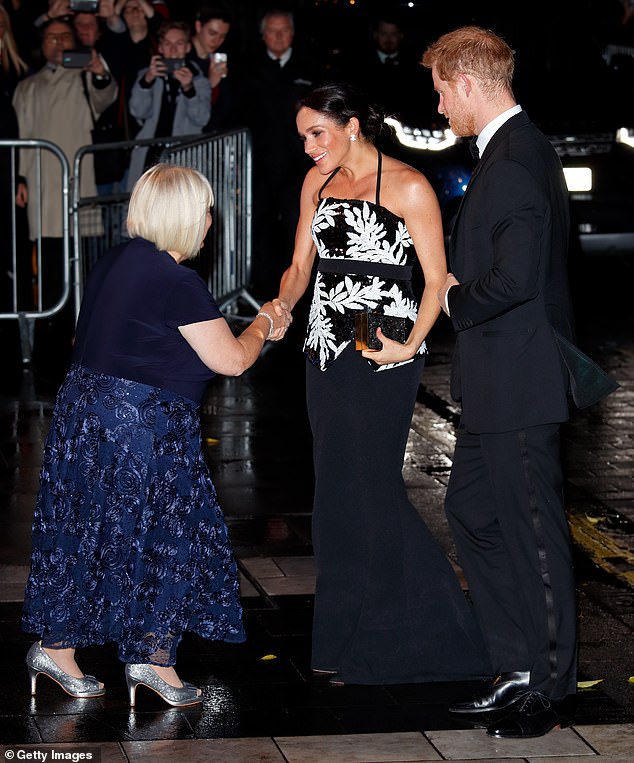 It’s amazing that Meghan seems surprised other royals are not slobs in track pants high-fiving each other and drinking beer at a barbecue behind closed doors.

Did she actually expect the Queen to be just someone’s granny in slippers? It feels like it’s a part of the problem she had with the family — expectations and reality. Yes, you curtsy; no, you don’t hug. Yes, there is a protocol to follow; no, it’s not a Disney story.