It could be YOUR lucky week! Record £191m EuroMillions prize goes up for grabs for THIRD time

The record-breaking £191 million EuroMillions prize is up for grabs for third time on Tuesday night, with the draw making the winner richer than Adele.

On Friday, five UK punters out of 14 players became millionaires after matching all five balls and one of the two lucky stars.

They each scooped £1,476,431 million in Friday night’s draw and a sixth player won £1 million in the MillionaireMaker draw.

But the massive £191 million jackpot prize has rolled over, after becoming available on June 17. 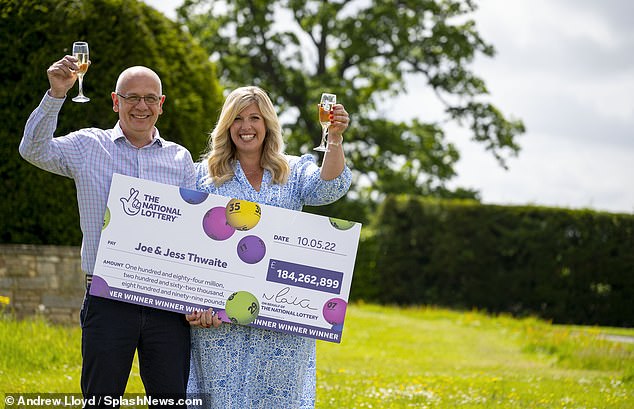 Whoever wins on Tuesday will smash the previous record of Joe and Jess Thwaite (pictured) from Gloucester, who bagged a whopping £184 million EuroMillions jackpot less than two months ago

The capped prize stays at that maximum figure for four draws in total which means it must be won by Friday, July 22.

It it still has not been won outright, the the huge prize is spread among the next tier of winners.

If a lucky UK ticket-holder manages to secure the top prize, they would be able to purchase a townhouse in London’s Mayfair, complete with steam-room and plunge pool, cinema room and fully-equipped chef’s kitchen — which is valued at £55 million on Zoopla — three times’ over.

And you would still have around £26 million leftover to spend on some small luxuries — like a tropical island.

Whoever wins on Tuesday will also beat the smash the previous record of Joe and Jess Thwaite from Gloucester, who bagged a whopping £184 million EuroMillions jackpot less than two months ago. 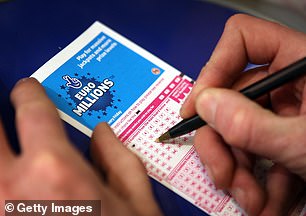 If by next Friday, July 22, the jackpot remains unwon, that draw will become a ‘Must Be Won’ draw

Following the win, they bought a second-hand Volvo and celebrated with a steak at Miller & Carter — which would have cost around £16.95 each.

Since the win, they are said to be eyeing up a £7.25million Cotswolds mansion near Jeremy Clarkson’s Cotswold farm.

The winner would become richer than Adele, who is worth £150 million, Dua Lipa, who has an estimated net wealth of £36 million, and actor James Corden, who is thought to be worth £50 million.

A Brit winning hitting the numbers would also mean that the UK would become the luckiest EuroMillions nation, beating France’s 117 wins to date since the draw began in February 2004.

There have already been three UK EuroMillions’ jackpot winners this year.

Only 14 British players have ever won a jackpot of more than £100million.

UK lottery winners have the option of revealing their identity or staying annoymous.

From the UK National Lottery’s rich list, only three winners out of the ten chose have previously chosen to reveal themselves.