An out-of-control V/Line train narrowly missed three pedestrians in a train crash earlier this year that would have likely proven fatal if the train's normal Saturday night football crowd had been on board.

The Wendouree-bound V/Line train had a train driver, conductor and two passengers on board when it was unable to stop at Ballarat Station and ploughed through level crossing gates at high speed on the evening of May 30. 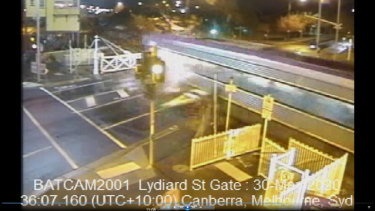 VLocity 3VL70 having impacted the first gate at Lydiard Street and about to strike the second.

Manufacturer Bombardier has undertaken fleet-wide testing of an adhesive mechanism called "sanders" and performed remedial action where required. This device, which releases sand onto the tracks to stop trains from skidding on wet or greasy tracks, was not functioning.

The train had been experiencing wheel side issues during braking on the approach to Ballan after departing Southern Cross Station, the investigation found.

Once the Ballarat train – which is normally full of people returning from AFL games, but was largely empty due to coronavirus restrictions – left Ballan, the wheels kept sliding when the driver tried to brake.

Investigators say the driver started braking earlier than he would normally as he approached Ballarat station because of the wet and windy weather.

"The train travelled through Ballarat Station at 100 km/h and passed a departure signal at Stop as it headed towards the Lydiard Street North crossing."

The train then continued at a speed of 73km/h over areas with a speed limit of 40km/h. 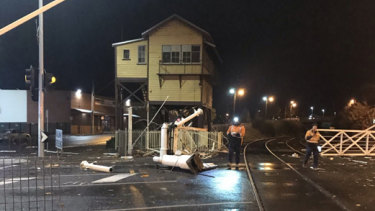 It passed through a second level crossing at Doveton Street North, where the flashing lights, bells and boom barriers were likely operating when the train passed through. It finally came to a stop after that.

One of the two passengers on the train sustained head, back and leg injuries and was admitted to hospital.

V/Line acting chief executive Gary Liddle said the regional rail operator had completed a full survey of all VLocity trains' sanding systems and updated the process for checking the systems during regular maintenance as a result of early investigations into the incident.

V/Line ran a stringent program of regular maintenance on all trains and had also completed an extensive assessment of the Lydiard Street level crossing, he said.

"The safety of our staff, passengers and the community is our number one priority – and we'll consider any advice recommendations from the Australian Transport Safety Bureau very seriously," Mr Liddle said.

"Alongside our own investigation, this report will identify steps to help prevent this type of incident from ever occurring again."

VLocity trains have been in operation on the network for almost 15 years.

The track between Melbourne and Wendouree is Class 1 (160 km/h) constructed on concrete sleepers and was upgraded between Deer Park West Junction and Ballarat as part of Victoria’s Regional Fast Rail project completed in 2006.