Reed said in a statement that he was “struggling” in early 2017, when the incident occurred, and entered treatment for alcohol abuse later that year. 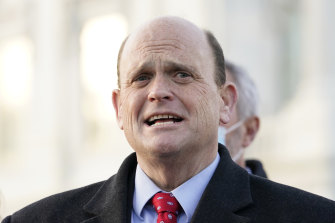 Republican Tom Reed, who was accused of rubbing a female lobbyist’s back and unhooking her bra without her consent in 2017, has apologised and announced he will not run for re-election.Credit:AP

The New York congressman has been considering a bid to unseat Cuomo, a Democrat, and had called for the governor to be impeached amid allegations that he sexually harassed women, mostly state employees. Since he was elected to Congress in 2010, Reed has cast himself as a champion of women’s rights.

Davis, a former lobbyist for Aflac insurance, said Reed rubbed her back and unhooked her bra during a gathering with other lobbyists at a Minneapolis pub in 2017. She was 25 years old at the time and on her first networking trip. He was 45.

“A drunk congressman is rubbing my back,” she texted a friend and co-worker at Aflac that evening, adding later, “HELP HELP.”

Davis said she asked for help from a person at the table, who pulled the congressman away and escorted him out of the restaurant.

Reed last week declined to answer detailed questions about the incident, saying only, “This account of my actions is not accurate.”

On Sunday, Reed apologised profusely to Davis as well as to his family, constituents and other supporters. “Even though I am only hearing of this matter as stated by Ms Davis in the article now, I hear her voice and will not dismiss her,” he said in the statement. “In reflection, my personal depiction of this event is irrelevant. Simply put, my behaviour caused her pain, showed her disrespect and was unprofessional. I was wrong, I am sorry, and I take full responsibility.”

He said he planned to dedicate himself to making amends for his past behaviour and helping others battling substance abuse.

“I am now approaching four years of that personal lifelong journey of recovery,” he said in the statement. “With the support of my wife, kids and loved ones, professional help, and trust in a higher power, I continue that journey day-by-day. This is in no way an excuse for anything I’ve done.”

Reed is a co-chair of the Problem Solvers Caucus in the House, a bipartisan group that aims to find common ground on key issues.

After learning of Reed’s apology, Davis said: “I am grateful for Congressman Reed’s reflection on his actions. I hope that his words and actions will be an example for others who face similar allegations.”

Davis, now a second lieutenant in the US Army, has said she decided to come forward to show leadership to other women, especially victims of sexual harassment and misconduct. Because of concern about possible repercussions for her fledgling career, Davis decided in 2017 not to report the matter to the House ethics committee.

After her story was published in the Washington Post last week, Aflac said in a statement: “Aflac takes these allegations very seriously and values above all else the safety, security and dignity of our employees. When this matter was reported to senior leadership and colleagues who were not present at the time, we immediately provided support and counsel for Nicolette, enabling her to determine personally how she wanted to proceed with regard to bringing this deeply troubling experience to light.”