Restaurant boss, 45, treated a Bulgarian kitchen porter 'like a slave'

Restaurant boss, 45, who treated a Bulgarian kitchen porter ‘like a slave’, called him a ‘pig’ and grabbed him by the throat for not boiling a pan of peas faces damages pay out for racial harassment

A hot headed restaurant boss who called a kitchen porter a ‘donkey,’ manhandled him in front of staff and treated him ‘like a slave’ at his steakhouse was facing a damages payout for workplace harassment today.

Gurhan Mustafa, 45, humiliated EU migrant Dimitar Dimov on a regular basis and left him with no time to wash his single-issue uniform ahead of seven-day-a-week shifts.

On one occasion, an employment tribunal heard Mr Mustafa grabbed Mr Dimov by the throat leaving him with red marks on his neck for not boiling a pan of peas. 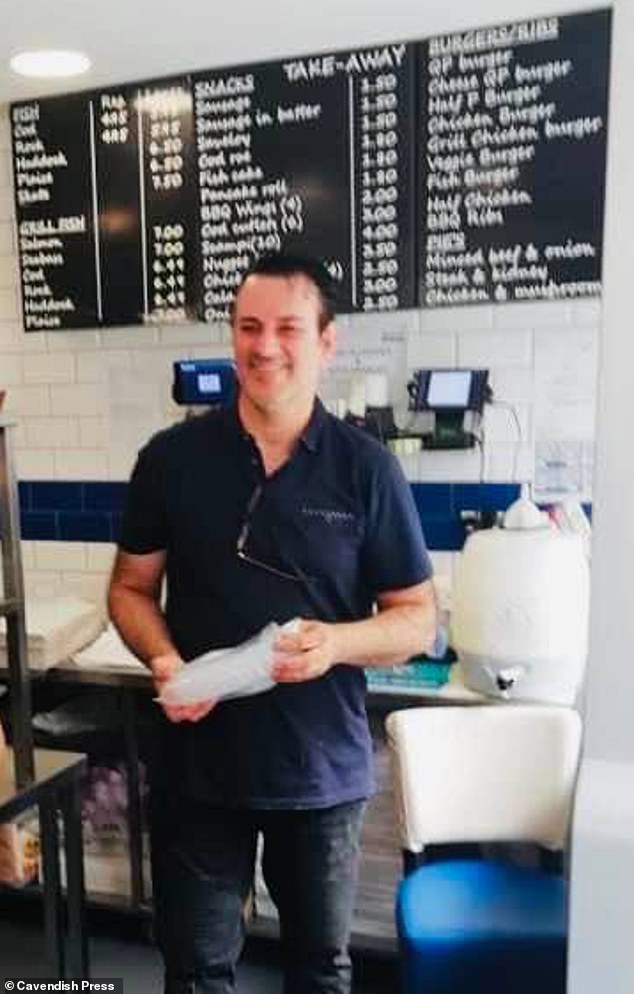 Dimitar Dimov said he would often be called a ‘f***ing Bulgarian’ by Gurhan Mustafa (pictured). A colleague said their boss would swear at him Mr Dimov and call him a ‘f***ing idiot’ and use Turkish words that meant ‘cow, donkey and gypsy’

Another time, Mr Mustafa held his employee by his shirt and pushed him against the wall whilst calling him a ‘pig’ and a ‘f***ing idiot’ after the assistant turned up for work with an open can of soft drink.

He also paid Mr Dimov less than the minimum wage and when asked why by another employee said: ‘If you don’t like it, pay him yourself.’

Mr Dimov left his job in November 2019 after three years, telling Mr Mustafa in a text: ‘I quit. I will no longer work for you. I wish you luck. I’m sorry.’ He later sued for racial discrimination.

At an employment tribunal in Croydon, south London, Turkish Cypriot father of one Mr Mustafa was found to have subjected Mr Dimov to harassment on the basis of his race and of unlawfully deducting his pay.

Mr Dimov, who spoke little English, had initially started working at Mr Mustafa’s cafe Mambocino in Erith near Charing Cross in August 2016 after arriving in the UK from his native Bulgaria.

He ended up working every day at the cafe before working the evening shift next door at the Riverside Fish and Steakhouse which Mr Mustafa runs with his partner Edita Joinatyte. 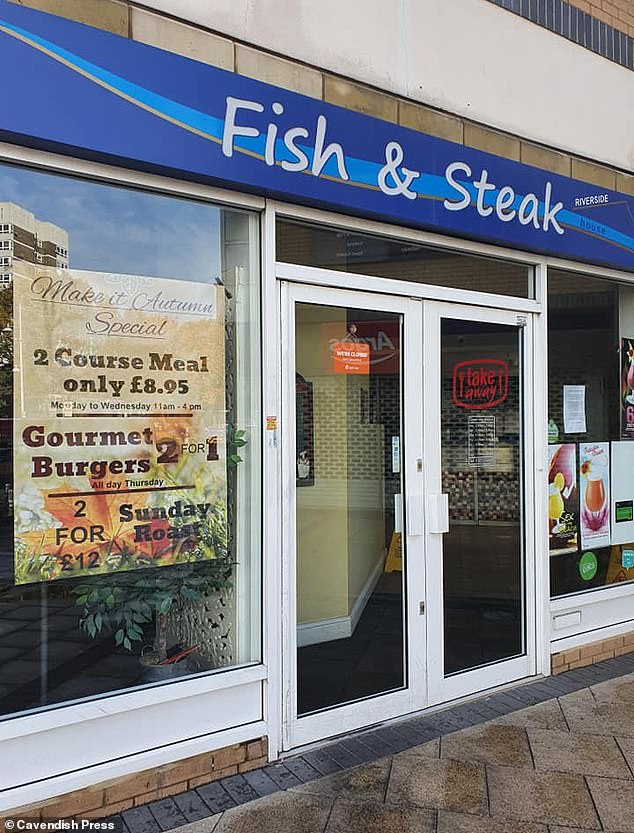 Dimitar Dimov worked seven days a week, moving from the cafe in the daytime to the restaurant (pictured) for the evening. It left him with no time to wash his only uniform ahead of shifts

During his period of employment, Mr Dimov claimed he was assaulted four times and said he was ‘treated like a slave’ because he is Bulgarian.

He described being ‘laughed at and humiliated’ and said he was paid less than the national minimum wage throughout and not given holiday.

Tribunal chairman Judge Lise Burge said: ‘The Claimant worked at Mambocino every day and assisted with tasks such as washing up, taking out the refuse and recycling, collecting and unpacking deliveries, food preparation and general cleaning.

‘He would go and make himself food, go outside and eat to have a lunch break, but after a while Mr Mustafa would shout at him and say “why are you sitting down go and work”.

‘The Claimant then started to work in the evenings at Riverside Fish and Steak House which was being set up. This was a new business for Mr Mustafa and his partner Ms Joinaitis was the manager.

‘There were hygiene issues for the Claimant as he worked all day at Mambocino and then at Riverside and he only had one Mambocino T-shirt. He did not wash it often as he did not have much time off to be able to wash. 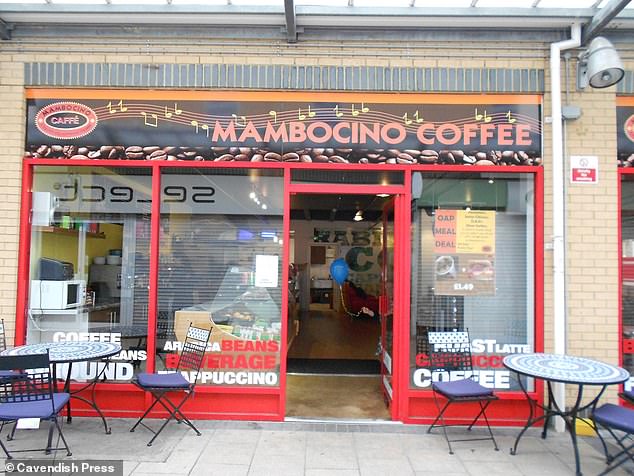 ‘The Claimant’s evidence changed about what hours he started and finished, although he consistently said that he worked all the time. There were a few rare occasions when he would not work on a day.

‘The tribunal found the Claimant worked seven days a week at Mambocino for five hours a day on average with his start and end times ranging from 7am- 6.30pm. He would then go and work in Riverside in the evenings.

‘The Claimant never received holiday pay. Mr Mustafa frequently behaved in an abusive and offensive way towards the Claimant.

‘The Claimant was overworked and subjected to humiliation, threats, curses, swearing, maltreatment being called idiot, animal, pig, donkey, cow and gypsy. The Claimant experienced this unwanted treatment as hostile, degrading humiliating and offensive.’

The hearing was told Mr Dimov was advised he would be paid minimum wage but received just £300 cash in hand per week when he ended up worked shifts at both Mambocino and Riverside.

When challenged by another employee on why Mr Dimov’s pay was so low Mr Mustafa retorted: ‘have unlawfully deducted’

In his evidence Mr Dimov said he would often be called a ‘f***ing Bulgarian’ whilst a colleague told how Mr Mustfa would swear at him and call him a ‘f***ing idiot’ and use Turkish words that meant ‘cow, donkey and gypsy.’

One witness said Mr Mustafa was a ‘bad employer who mistreated staff in different ways’ and said Mr Dimov was ‘very overworked.’

She said Mr Mustafa shouted at ‘everyone’ but mainly his outbursts were aimed at Mr Dimov if he made mistake.

In one one incident at the Riverside in December 2017, Mr Dimov had bought two cans of drink in with him, one of which was open, whereupon Mr Mustafa pushed the cans on the floor, grabbed Mr Dimov and pushed him to the corridor and pinning him against the wall calling him ‘f***ing idiot’ and Turkish words which translate to animal, pig, donkey and gypsy.

The employer was said to be so angry he had to be pulled away by another employee.

In another incident in May 2019, Mr Dimov was summoned to the kitchen and shouted at over why he had not boiled the peas.

Mr Dimov said he had been helping his colleagues as the restaurant was busy only for Mr Mustafa to grab him by the throat shouting ‘f***ing c**t’, ‘f***ing Bulgarian’ and the pair had to separated. Mr Dimov was left with red marks on his neck.

During the hearing two witnesses were compelled to attend – one claiming she was afraid of what Mr Mustafa ‘would do in retaliation’ should she testify whilst another asked for cash to give evidence.

Mr Mustafa himself denied being abusive said Mr Dimov would be rebuked for being ‘messy’ and ‘smelly’ and accused him of picking up mashed potatoes with his hand and put it on a plate to serve to a customer.

But when giving evidence, the boss repeatedly lost his temper and was said to have treated Mr Dimov’s representative Gina Pratt, with ‘disdain’ saying he never trusts a ‘church person’ and claiming she was a ‘bad person.’

In conclusion Judge Burge added: ‘The Claimant was treated very badly throughout his employment.

‘He was overworked, underpaid and he was subjected to verbal abuse, and on two occasions, to physical abuse – he was pushed against a wall and grabbed by the throat. 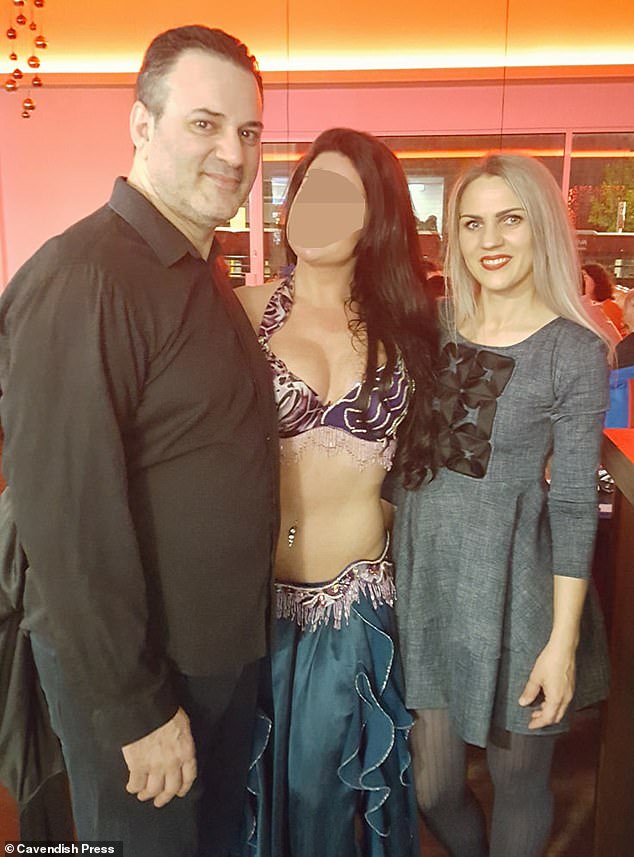 Mr Mustafa called his kitchen porter a ”donkey’, manhandled him in front of staff and treated him ‘like a slave’ at his cafe and steakhouse. Pictured with partner Edita Joinatyte right and a Turkish dancer at their restaurant

‘This behaviour was unwanted it not only violated the Claimant’s dignity but also was experienced by the Claimant as creating an intimidating, hostile, degrading, humiliating or offensive environment for him. Given the extent of the mistreatment, the Tribunal concludes that it was reasonable for the conduct to have that effect.

‘The Claimant was vulnerable because he had come to England shortly before he started working for the respondent with no family and he could not speak English.

‘He got a job washing up and working as a general help at Mambocino but he did not know about the rights that he had and what his pay should be.

‘When asked why he did not get help or go to the police he answered that he could not speak the language and so would not be able to get any help.

‘All of these vulnerabilities were intrinsically connected to his nationality and Mr Mustafa took advantage of him because of them.

‘There were a variety of nationalities working at Mr Mustafa’s businesses. Mr Mustafa sometimes treated others badly.

‘But it was the Claimant who he treated very badly, not only by over working and underpaying him but abusing him verbally and also physically twice. The language that he used showed a contempt for him personally.’

It is thought a further hearing will be held to establish how much Mr Mustafa must pay to Mr Dimov.