The public artwork, bara, (the Gadigal word for shell hook), is the work of Waanyi artist Judy Watson, who said she was inspired by historical artefacts that reveal discrimination and hidden histories from Australia’s past.

The work was commissioned by the City of Sydney and guided by its former and current Aboriginal and Torres Strait Islander Advisory panels and curatorial advisor Hetti Perkins, who explains the work’s significance below. – Tim Barlass 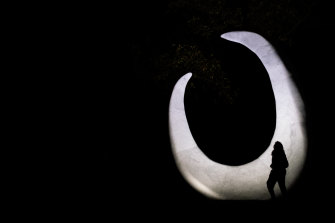 Standing proud in a growing cosmopolitan city, Judy Watson’s bara will become a national icon, serving as a prominent and permanent reminder of our country’s history, our nation’s beginnings, and our shared future.

Most significantly, it pays tribute to our people, the First People, who have called this land home for millennia. Sydney, as the international gateway to Australia, should lead by example in honouring the world’s oldest continuous cultural tradition.

Unveiled in Cadigal country on The Royal Botanic Garden Sydney’s Tarpeian Lawn on Saturday, bara fulfils the aspirations for this nationally significant commission to honour the Cadigal and neighbouring Eora clans.

Commissioned by the City of Sydney, Watson was inspired by the crescent shapes of bara: traditional fish hooks crafted and used by Gadigal women for thousands of years. 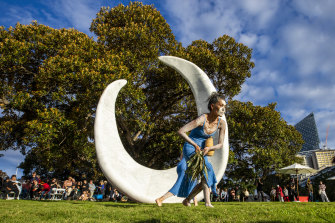 Members of the Burrundi Theatre Dance Group celebrate the unveiling of ‘bara’ on Saturday.Credit:Joseph Mayers

Crafted from shells, their fishhooks – tied with carrejun or carrahjun (bush string) – hauled in catches which were cooked in open fires on the shallow canoes. The flashing light from the reflective shell surface was no doubt an irresistible lure for the fish. In the evening, the lights from these cooking fires sparkled across the surface of the water along with the voices of the women and their children calling to each other and their family members on shore.

Eora means ‘People’ – a word derived from Ee “yes” and ora “here” or “this place”, and reveals the deep connection of the Sydney people to their land.

Eora presence is etched upon the landscape in many sites of ceremony and dwelling, pathways and trade routes. Fringing the deep harbour and ocean foreshore are galleries of rock art that attest to ancestral agency alongside middens of shells and fishhooks that annotate the timeless intersection of culture, community and country.

It is hard to imagine Sydney today without the Harbour Bridge and the Sydney Opera House … ‘bara’ takes its rightful place within this world-renowned precinct.

Located at Warrane in a pocket of relative tranquillity and calm in a busy city, bara will create a contemplative space, in an endless urban narrative. The magnificent resident fig trees offer a protective natural backdrop to the bara form and this sense of sanctuary is echoed in the circular embrace of the sculpture itself.

The positioning of the work also echoes the lighting of signal fires on headlands which heralded the route of travelling ships, as documented in colonial records. Other evocative descriptions from early Sydney recounted in the journals of the day, are the scenes of women fishing from their nawi, a type of canoe, in the harbour.

In developing her concept, Watson adopted her well-honed and critically acclaimed practice of literally and figuratively drawing inspiration and information from significant objects held in public collections that have a special association with the project she is researching. Bara from the Australian Museum collection provided the wellspring for Watson’s creative interpretation of the artist brief.

The proposal was developed in consultation with senior local cultural custodians Allen and Charles Madden, including a descendant of the clan on whose country some of the shells were collected.

Watson’s concept was then selected from a highly competitive field by a panel whose members comprised Aboriginal art specialists, a representative of the Metropolitan Local Aboriginal Land Council, architects and state gallery representatives and subsequently endorsed by the Aboriginal and Torres Strait Islander Advisory Panel of the City of Sydney.

From a curatorial perspective, the bara elegantly and eloquently embodies the deep cultural heritage of Sydney. Standing sentinel-like on the headland of Warrane, it reiterates the gatherings of Gadigal people and neighbouring Eora clans in the past and becomes a focal point for contemporary gatherings.

The artist has also drawn an equivalence between the shape of the object and the crescent of the new moon. This association suggests the role the moon plays in governing the tides and other aspects of fishing practices.

Similarly, the moon and the shell bara share a pearlescent quality. In the evening the bara does not try and compete with the cacophony of the city lights. Rather the intention is for the work to glow or shimmer like the moon. It retains a distinctive, naturalistic presence within the night landscape and offers a holistic view of the meaning of ‘country’ for Aboriginal people, an inclusive perspective encompassing the land, the waters and the skies.

Within the cultural constellation of significant (although little known) sites housed within what is now The Royal Botanic Garden Sydney, the bara becomes a beacon, a guiding light by which we can navigate towards a better understanding of the rich and unique heritage of Sydney – far beyond the First Fleet and subsequent colonial narrative.

It is hard to imagine Sydney today without the Harbour Bridge and the Sydney Opera House. These contemporary structures have become synonymous with the city and two of Australia’s most famous landmarks. bara, like the missing piece of the ‘puzzle’, takes its rightful place within this world-renowned precinct in the company of these celebrated icons, with its arcing form mirroring the sails of the House and the curve of the Bridge.

Hetti Perkins was the curator of Aboriginal and Torres Strait Islander art at the Art Gallery of NSW for 13 years, and is the daughter of Indigenous activist Charles Perkins.