Roofing firm boss, 48, is jailed for two years for faking dead worker’s signature on safety form in bid to dodge blame after he fell 20ft to his death

A roofing company boss has been jailed to two years for forging the signature of one of his workman after he fell 20ft to his death in a bid to dodge blame.

Mark Bray, 48, falsified health and safety documents to make it look as though foreman Kenneth Drake, 54, had signed a risk assessment for a £55,000 job.

Mr Drake, of Manchester, suffered catastrophic head injuries and died an hour later in hospital after he fell through the roof of the ironmongery firm on September 24 2015.

Bray, of Warrington, Cheshire, knew he might be held responsible for the tragedy because he failed to supply his workers with safety netting in a bid to cut costs – even though the roof of the building needed replacing.

He admitted perverting the course of justice and failing to take reasonable care of other persons under the Health and Safety At Work Act 1974.

Contracts manager Bray was sentenced to two years in prison at Manchester Crown Court, while his Warrington-based firm Roofing Consultants Limited was fined £100,000 and ordered to pay another £30,000 in prosecution costs.

The firm was cleared of corporate manslaughter in relation to Mr Drake’s death. 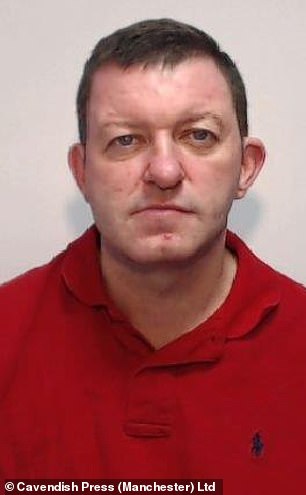 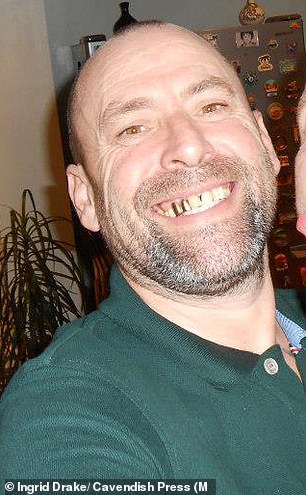 Mark Bray, 48, (mugshot left) falsified health and safety documents to make it look as though foreman Kenneth Drake, 54, (right) had signed a risk assessment for the  £55,000 job that led to his death

The court heard how Mr Drake had been hired to lead of team of roofers to replace a broken roof at Abbey Architectural Ironmongery Company Limited in Rochdale in September 2015.

Bray’s employers had been sub-contracted to do the job by another firm but the roofing team were not equipped with full body harnesses or ‘easi-dec’ – a platform designed to make fragile roofs safer, the court was told.

The 48-year-old was in charge of health and safety issues at the firm but he also failed to give Mr Drake and his colleagues a safety briefing – instead making a business trip the Midlands.

Bray (pictured outside court), of Warrington, Cheshire, knew he might be held responsible for the tragedy because he failed to supply his workers with safety netting in a bid to cut costs – even though the roof of the building needed replacing

Prosecutor John Harrison QC told the hearing: ‘Mark Bray made a visit to the site on July 30 before the accident but he did not go on the roof himself to investigate it.

‘In Mark Bray’s notebook, he said that it wouldn’t be possible to put a net over the roof and that Easi-Dec would be needed instead.

‘But it’s clear that he did not conduct a safety induction and in the risk assessment method statement, there’s no mention of Easi-Dec, it just suggests that they should stand on the timber decking to avoid falling through.

‘Mr Drake was seen climbing the scaffolding to get to the roof but there was initially no ladder. They also only had hi-vis jackets – no hard hats and no safety harnesses.

‘The following day the ladder was delivered by an employee for Abbey Architectural heard a cracking noise and looked up to see a foot had come through the roof.

‘Later that day, Kenneth Drake came into the warehouse and made a complaint about the roof, saying that it was rotten. Mark Bray visited the site on September 23.

‘He climbed up the ladder and onto the roof for inspection. He was up there for about six minutes.

‘During the time that he is there, pieces of roof were being thrown from the roof into the skip.

‘But there’s no safety measures, no netting, no harnesses. Bray knew how the work was being done and he did nothing.

‘He said nothing to change how the men were working, with no harnesses, no safety decks, nothing. He must’ve seen it but he allowed it to continue.’

On the day of the accident Mr Drake had arrived with brother Brian at 8am to start work after placing a tarpaulin on the roof to stop it leaking, but half an hour later he fell through the roof to the floor below.

He sustained severe head injuries including a fractured skull and died less than an hour later at Royal Oldham Hospital. He also suffered fractures of both his wrists from trying to break his fall. 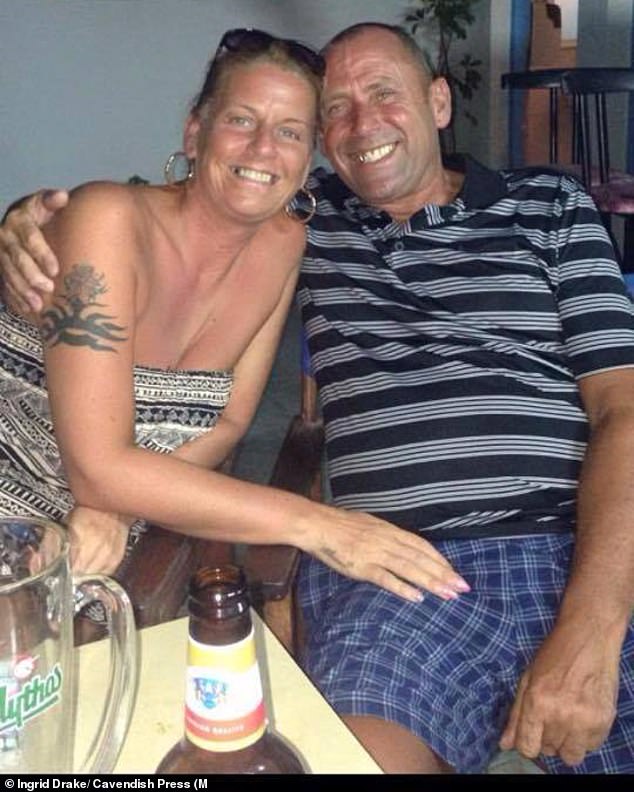 Kenneth Drake is pictured with his widow Ingrid 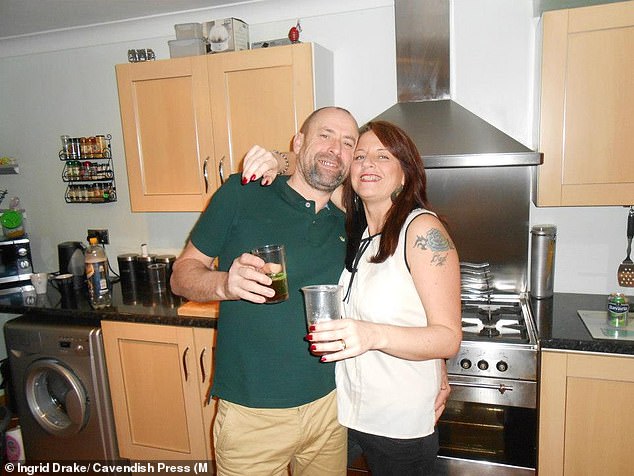 Kenneth Drake is pictured smiling with his wife Ingrid

In the aftermath of the tragedy, Bray falsely claimed he had printed a risk assessment form from a portable device in his vehicle which he then asked the roofers to sign.

He wrongly said the form claimed Easi-Decs were to be used and harnesses were to be connected. It also said that the work area should be cordoned off with fencing to stop people coming in and out.

In a heart-breaking statement Mr Drake’s widow Ingrid said: ‘Ken was an amazing husband and stepfather. He was a loving, caring man who made everyone laugh.

‘We shared so many memories and its heart breaking to know we can’t share any more.

‘It’s sad to know he’s missed out on such magical moments in our lives, like watching our daughter get married. He’s truly missed by everyone and always will be.’

After the case Detective Chief Inspector Richard Eales, of Greater Manchester Police said: ‘Today’s result should serve as a stark reminder to those who employ people and have a responsibility to look after them in the workplace.

‘Cutting corners in this way is dangerous and can ultimately rip families apart, because it was these actions that had absolutely cataclysmic consequences and led to Ken’s unnecessary and preventable death.

‘The fact that Bray went onto forge Ken’s signature demonstrates than rather than thinking about Ken and his loved ones in the aftermath of his death, Bray’s sole thought was to cover his tracks and prevent the investigation from establishing what had occurred. 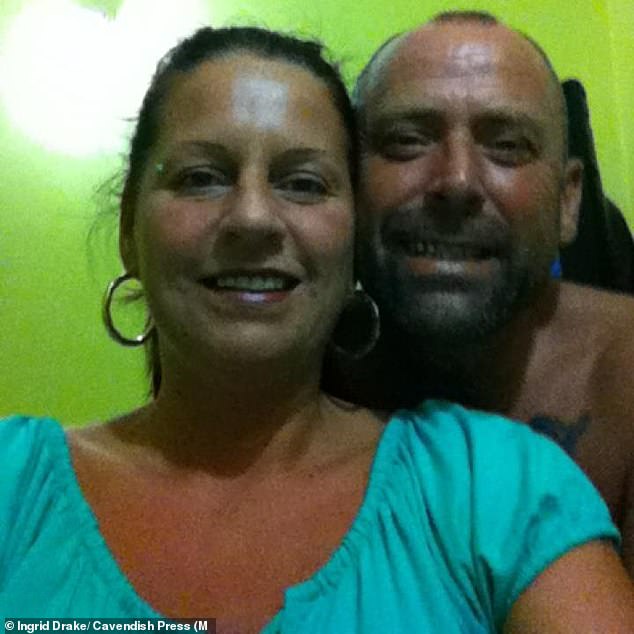 The Drakes are pictured on holiday together smiling for the camera

‘I hope the fact Bray has to serve a jail sentence serves as justice for Ken and his family who have been left absolutely devastated by his death.

‘Hopefully they are provided with a measure of comfort at the end of what has been a very long and difficult road.

Health and Safety Executive principal inspector, Laura Royales added: ‘This was an entirely foreseeable and preventable incident which resulted in a tragic and needless loss of life.

‘Falls from height remain the biggest cause of workplace fatalities in the UK construction industry.

‘It is vital that those involved in planning, managing and carrying out work at height understand the risks and identify and implement suitable control measures to prevent injury. Had such steps been taken in this case, this incident would not have occurred.’

Rochdale-based High Ridge Roofing Solutions Limited. which was originally contracted to do the job, was fined £12 000 and ordered to pay £33,000 in prosecution costs after being found guilty of Regulation 15(2) Construction Design and Management Regulations 2015.