A branch manager for a decorating supplies firm fleeced the company out of £40,000, flogging paint for cash and then pocketing the money for himself.

George Smith, 33, a married father, from Northwich, Cheshire, spent the money on drugs, alcohol and prostitutes, a court heard.

Smith, a £27,000-a-year manager at the Trafford Park branch of Bromborough Paints, sold paint and wallpaper to decorators for cash and then fiddled the books to cover up his crime.

He joined the firm in September 2016 and was ‘in a senior position with a high degree of trust’, prosecutor Rachel Widdicombe told Manchester Crown Court on Friday afternoon. 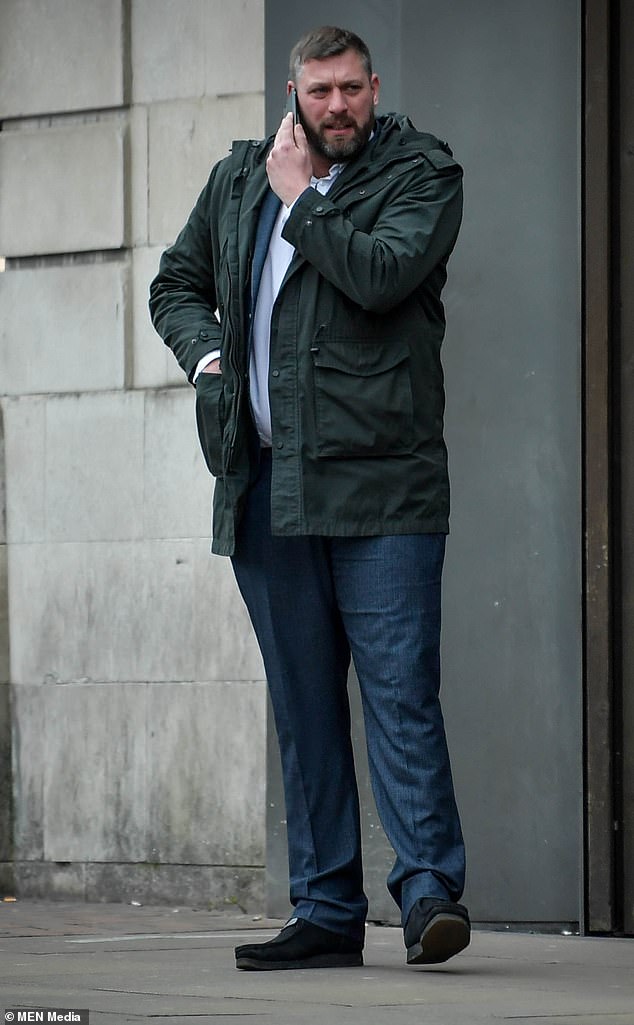 George Smith, 33, a branch manager for a decorating supplies firm, fleeced the company out of £40,000, flogging paint for cash and then pocketing the money for himself. He spent it on drugs, alcohol and prostitutes, a court heard. (He is pictured outside Manchester Crown Court on Friday)

‘He was also expected to set a positive example to other members of the team,’ she said.

But his thieving came to light when the firm’s finance director and his friend, Giuseppe Alfonso, spotted a discrepancy of £5,000 during an audit in May 2019.

He realised it had been created by an individual accounts log-in attributed to Smith.

The ‘adjustment’ was dated January 2018 – some 18 months after Smith had started working for Bromborough, now known as PaintWell.

Smith was suspended and an investigation by the firm concluded he was behind the theft, mostly of paint but also some wallpaper, worth £61,184, said Ms Widdicombe.

He had started off stealing goods worth £348 in January 2018 but gradually the value of his crimes increased, to £5,729.

In a meeting with Mr Alfonso, Smith at first blamed company training but when told the crime would be reported to police, he ‘accepted his responsibility’, according to the prosecutor.

He told his employer he had ‘got himself in a rut’ and had developed addictions to drink, drugs and prostitutes. He admitted he would sell paint to decorators for cash and just pocket the money for himself before making adjustments in the accounts to hide his thieving.

Smith’s bank statements showed he had made ‘numerous cash withdrawals’ and money was spent on hotels, restaurants and takeaways while they were ‘no obvious outgoings’ such as rent or a mortgage.

Despite his admissions during the meeting, when he was interviewed by police in February 2020, he declined to make any comment. And when he appeared charged with theft at the magistrates’ court, he denied the offence, said the prosecutor.

Mr Alfonso told investigators Smith had come with good references and that he ‘placed a significant degree of trust’ in him.

In a victim impact statement read out to the court, Mr Alfonso said staff bonuses had to be slashed while the number of branch managers with permission to work in their accounts system was also cut ‘due to the actions of one individual’.

He said he broke down and was left in tears when he realised the scale of the theft during the meeting with Smith.

Mr Alfonso said he had been to charitable events with Smith and had to ‘break the news’ to the defendant’s mother and brother that he had been caught stealing and that the police had been called.

He recalled how ‘distressed’ Smith’s mother was and that decorators would come into the Trafford Park branch and asked for ‘the same deal’ Smith had offered them. 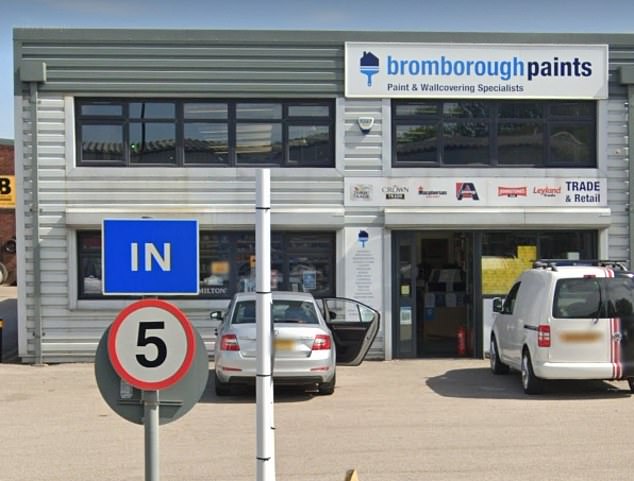 Smith – a £27,000-a-year manager at the Trafford Park branch of Bromborough Paints (above, now known as PaintWell) – sold paint and wallpaper to decorators for cash and then fiddled the books to cover up his crime. He has been handed a 21-month jail sentence

Mr Alfonso said customers were ‘made to feel like thieves’.

‘We took a lot of users’ rights away from branch managers which has left a mark on those who are hard-working and honest,’ he said.

‘I personally regarded him as a friend and not just a work colleague. I cannot fathom the level of dishonestly he showed in his actions,’ he added.

The crime, he said, had had a ‘ripple effect’ on staff as ‘trust has well and truly been broken’.

‘As a finance director, I have found myself working as an ad hoc detective which has caused me undue distress,’ he added.

Simeon Evans, defending, said his client believed other staff had access to his work account without his knowledge although Smith ‘did not seek to minimise’ his crime.

Smith submitted a ‘basis of plea’, accepted by the prosecution, stating he was only responsible for theft worth £40,000.

The defendant had ‘doubled sales’ in his time at the firm and ‘in every other regard he was a good employee’, said Mr Evans.

Urging the judge to suspend any prison sentence, he stressed his client had no previous convictions and that the nature of crime meant ‘it was bound to come back to him eventually’.

He ‘never envisaged’ the impact on colleagues who remain at the company, said the barrister.

Mr Evans said ‘fear’ had made his client ‘resile’ from admissions he had made to his bosses when he eventually appeared in court and denied the offence.

Smith, he said, was ‘thoroughly ashamed’ but he pointed to the ‘break-up of his marriage’ around the time of the theft which the barrister said applied pressure to a ‘fault line in his character’.

The defendant had ‘invested’ in his wife and children and felt ‘abandoned’ when ‘that was taken away from him’.

As Smith’s mother and brother watched from the public gallery, Mr Evans said: ‘This came as an enormous shock to the family. It’s not what they expected of him and they have been struggling to deal with this but they continue to support him.’

One of the defendant’s sons had been diagnosed with autism and would find it ‘particularly hard’ if his father was sent to prison, said Mr Evans.

Sentencing, Judge Hilary Manley told Smith: ‘You stole over a 16-month period £40,000 from your employers. You were in a position of significant trust, employed as a branch manager on around £27,000 a year which is considerably more than many people around the UK.’

She added: ‘You squandered the money on meals in restaurants, nightclubs and prostitution services. It’s all gone.’

Judge Manley went on that ‘trust has been broken’ for the staff who remain at the firm because of changes introduced to prevent a repeat of such a crime, while staff bonuses have also been slashed.

She noted the defendant had had a ‘loving’ upbringing and that his marriage break-up had ’caused anguish and distress’.

‘It’s no excuse,’ she said, repeating that Smith had spent the money on drink, drugs and prostitution. His remorse, said the judge, was ‘limited’.

Smith had spent the money on a ‘selfish lifestyle’, said the judge, concluding only a custodial sentence was justified.

Smith showed no reaction as he was handed a 21-month jail sentence. He waved to his mother and brother as he was taken away to begin his sentence.

The defendant, of Violet Grove, Northwich, admitted one offence of theft at a previous hearing.