The new Scottish Conservatives leader has said the furlough scheme was made possible by the Union.

Douglas Ross is urging Boris Johnson to show the Union is ‘inclusive and in touch’ and says it is in the SNP’s interests to present the Union as ‘unstable’.

Rishi Sunak made his first visit to Scotland this week since becoming Chancellor and is the fifth Cabinet minister to do so, in a battle for the Union.

Writing in the Sunday Telegraph, Mr Ross said: ‘Millions of workers have benefited from the UK Government’s furlough scheme, one only made possible by the country’s broad fiscal shoulders.’

He added: ‘We must find new ways to show that our Union is a common endeavour, held together not just by convenience, but by shared values and mutual gain.’ 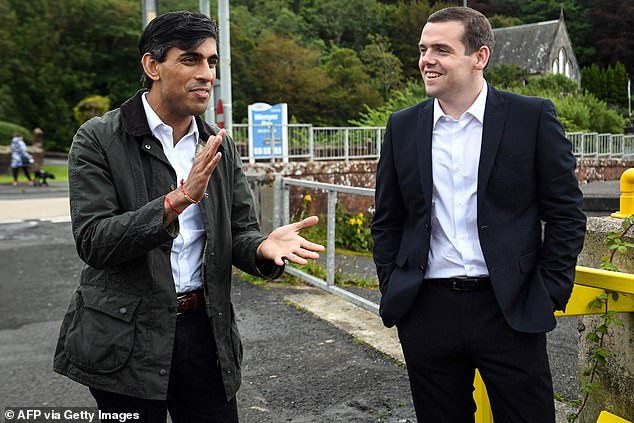 New leader of the Scottish Conservative Party Douglas Ross (pictured right, with Chancellor Rishi Sunak) said we must find new ways to show the Union is held together by shared values and mutual gain

Mr Ross made comments about the complacency of the Tory government when it came to the link between England and Scotland.

There are concerns that the coronavirus pandemic is splitting Scotland and England due to differing approaches by Boris Johnson and First Minister Nicola Sturgeon, according to the Sunday Telegraph.

Boris Johnson is attempting to cut off support for Nicola Sturgeon and Scottish independence in the wake of Brexit and coronavirus.

Recent polls have suggested a majority support for independence for Scotland, which overwhelmingly voted against Brexit in 2016.

And elections for the Scottish Parliament next year are set to give a major sign of the strength of feeling.

On his visit, Mr Sunak played up the Treasury’s help for Scotland during the pandemic economic collapse.

The Tresaury said the UK Government schemes to support businesses recovering from coronavirus have paid out £2billion in Scotland.

The loan schemes have assisted some 65,000 businesses across Scotland., with more than 600,000 employees furloughed in Scotland by the end of May. 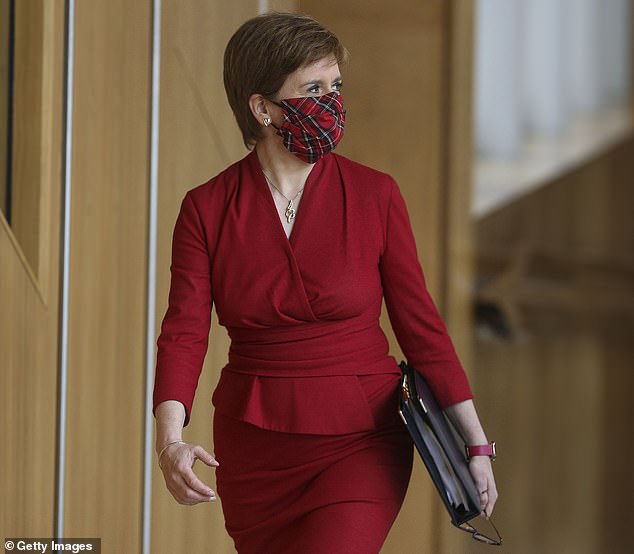 Mr Ross said that it is in the SNP’s interests to present the Union as ‘unstable’. Pictured: First Minister and leader of the SNP Nicola Sturgeon

The SNP, lead by Nicola Sturgeon, renewed calls to extend the furlough scheme, which is currently due to end at the end of October.

He said: ‘Cutting the furlough scheme prematurely is a grave mistake. By removing this crucial support in the middle of a global pandemic, and withholding the financial powers Scotland needs for a strong recovery, the Tories are increasing the risk of mass redundancies.’