One of Victoria's most senior police officers says he has not been told why the Australian Defence Force cannot provide personnel to support the NSW border closure as homicide and counter terrorism officers are revealed as being among those called to man checkpoints.

Hundreds of the more than 700 officers who are being recalled from holidays or redeployed for the mammoth task will spend the festive season in tents with most of the accommodation near the border already booked up with holidaymakers unable to leave Victoria due to coronavirus restrictions. 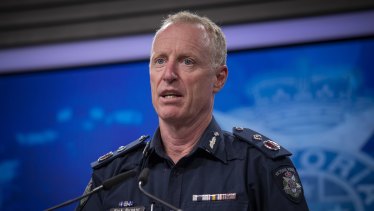 Deputy Commissioner Rick Nugent said the border operation had come at the most difficult time for the force with "tent cities" being created in towns including Cann River.

On Monday the ADF knocked back a state government plea to send troops to support already weary officers at the border operation. Instead, 50 defence personnel will help behind the scenes with logistics and planning.

"I'm actually not aware of the reasons why they can’t attend [border checkpoints]," Mr Nugent said on Tuesday.

Regional and rural stations and police patrols are expected to take the biggest hit with the bulk of the officers being redeployed to 31 border checkpoints coming from country areas. 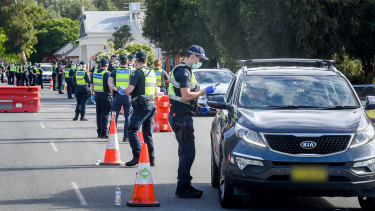 While freight trucks will be given a free pass through the border, all other vehicles will need to be checked. Motorists have been told to expect long delays.

Mr Nugent was quick to defend the support the ADF had previously given to police and said the working partnership at metropolitan Melbourne’s ring of steel during the city's stage four lockdown had worked exceptionally well.

But as regional areas prepare for an influx of tourists, they’re also preparing for an exodus of police with hundreds being sent to towns on the NSW border.

Mr Nugent said the force was now working to see where any future ADF resourcing could be used outside of the checkpoint efforts to help free up members.

The deputy commissioner said he was confident though that the redistribution of staff would have a minimal impact of service delivery across the state during the coming weeks.

"I am truly sorry this is in place and we have to do this," Mr Nugent said.

"This is a significant community safety challenge for us. None of us want to go into stage 4 lockdown again."

People from NSW's COVID-19 red zones, including the northern beaches are being refused entry to Victoria. All other travellers from NSW, or returning residents, will need approved permits. 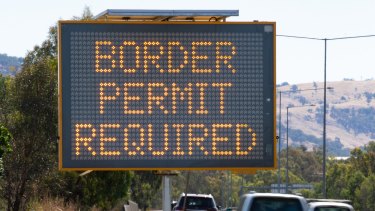 On Monday, Police Association secretary Wayne Gatt asked the federal government to "help us juggle this professional responsibly we have".

But Prime Minister Scott Morrison said 1600 ADF personnel were already directly involved in efforts to contain the coronavirus around the country and there would be additional logistics and other support to the Victorian government’s border operations.

"But that does not extend to actual patrolling of the borders. That's not something the defence force is doing any longer," he said.

The ADF said this was because they needed to prioritise resources for any urgent national priorities such as support for mandatory COVID-19 quarantine arrangements and preparations for the high-risk weather season.

A spokesman on Monday said more than 3000 ADF personnel had been deployed to Victoria since June with 235 currently supporting the state's hotel quarantine operations.

Since Tuesday morning, 12 people have already been turned back from the border and three people arrested for unrelated crimes including burglary and drink driving.

Mornington Peninsula Regional Tourism Board chair Tracey Cooper said while there was no indication so far that the popular tourist region would be short on police this summer, she said the area already though needed more police.

"It’s been busy since we opened up," she said.