Mexico City: A man lobbed a severed human head at a voting station in the border city of Tijuana and plastic bags filled with body parts were found nearby, authorities said, as Mexicans voted in the country’s largest elections in history.

Authorities said the man ran away, but they did not specify whether he was captured. They said they found plastic bags with human remains and severed hands in the area.

It was not immediately clear what message the gruesome act was meant to send and how it related to the election held on Sunday (Monday AEST). 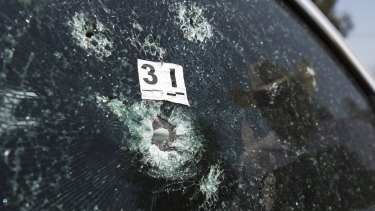 The windshield of mayoral candidate Guillermo Valencia is shattered after an attack in Morelia, Michoacan state, Mexico, last month.Credit:AP

The campaign for MPs and state authorities has been one of the bloodiest in recent history. Security consultancy Etellekt said 97 politicians had been killed and 935 attacked.

Elsewhere on voting day, someone threw an inactive grenade into a voting station in Mexico state, authorities said. One voter, who asked not to be named, said the crowd dispersed but then returned. 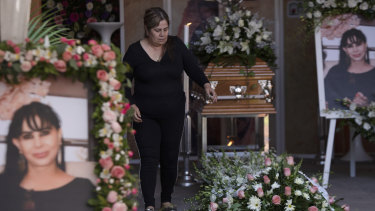 A woman attends the wake of mayoral candidate Alma Barragan who was killed last month while campaigning in Moroleon in violence-plagued Guanajuato state.Credit:AP

In Sinaloa, home to the Sinaloa cartel which survives despite the US arrest of its boss Joaquim “El Chapo” Gusmaz, armed men robbed electoral material from voting stations, a source at the state prosecutor’s office said.

All 500 seats in the lower house of the federal Congress, 15 state governorships and 20,000 local leadership positions are up for grabs, with a record 93.5 million Mexicans eligible to vote.

Erik Ulises Ramirez, a candidate for the left-wing opposition Citizen’s Movement party who survived an assassination attempt last month in Cocula, Guerrero state, said two of his allies had been kidnapped, beaten and then released on Sunday.

Security analysts said most electoral violence tends to occur at the municipal level, where gangs exert pressure to influence the outcome in the hope of securing more control over drug trafficking and other criminal rackets. 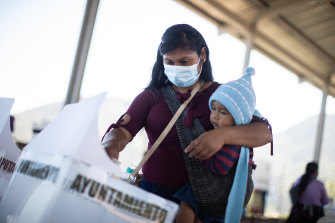 A woman casts her vote at a polling station in Alcozacan, Mexico, on Sunday.Credit:Getty Images

Federally the election has also been tinged by the COVID-19 pandemic and vaccine rollout.

Since taking office in 2018 after a landslide victory, President Manuel Lopez Obrador has expanded the role of the state in the energy industry and radically cut back on the cost of government to channel resources to the poor and his priority infrastructure projects.

In the process, he has eroded institutional checks and balances and frequently criticised autonomous institutions, including the Bank of Mexico, prompting critics to sound the alarm about a dangerous centralisation of power. 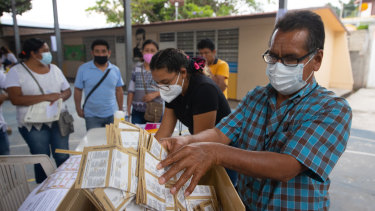 A polling station official counts votes on in Petaquillas, Mexico, on Sunday.Credit:Getty Images

Though voters tend to criticise his government’s record on job creation and fighting crime, they are more sceptical of former rulers, now in opposition. Obrador has also benefited from the vaccine rollout.

“I stand by my president. They’ve attacked him a lot but I see that he’s doing things right … I’m voting for [the ruling] MORENA party across the board,” said 36-year-old Luis Dominguez in the small municipality of Cuaxomulco in the south-eastern state of Tlaxcala.

“We have to support him so he can complete his mission,” said Dominguez.

Recent polls suggest Obrador’s National Regeneration Movement (MORENA) may lose some of its current 253 seats in the lower house, but is still likely to retain a majority with the help of the allied Green and Labour parties. The Senate is not up for election.