But body camera footage released from that stop completely contradicts the claims that Sheriff William Bowman made.

The Delaware State women’s lacrosse team was stopped on April 20 while traveling north on I-95 in Georgia after a road game against Stetson University in Florida. The bus driver for the HBCU team said he was told he was pulled over in Liberty County — which is located just south of Savannah along the coast — due to a traffic violation for driving improperly in the left lane.

Bowman addressed the issue on Tuesday afternoon, and said that “no personal items on the bus or persons were searched.” That, based on both body camera footage and footage from a DSU player, is completely false.

A Liberty County Sheriff’s Office deputy announced on the bus that deputies were going to search players’ luggage and wanted players to tell them ahead of time if they had any marijuana. The deputies involved were white, and the majority of players on the bus were black.

“We're gonna check ya'll's luggage," the deputy said in a video posted by a player. "If there is anything in y’all’s luggage, we’re probably gonna find it, OK. I’m not looking for a little bit of marijuana but I’m pretty sure you guys’ chaperones are probably gonna be disappointed in you if we find any. …

"If there is something in there that is questionable, please tell me now. Because if we find it, guess what. We're not gonna be able to help you."

Deputies also reportedly used a drug-sniffing dog, and opened an unwrapped graduation gift that a player’s family had given her on the road trip.

"Before entering the motorcoach, the deputies were not aware that this school was historically Black or aware of the race or the occupants due to the height of the vehicle and tint of the windows," Bowman said, via the Wilmington News Journal.

Many on the bus, though, don’t believe that to be the case — especially considering the bus was pulled over for a minor traffic violation. The driver, who is also Black, was not cited for anything in the end and the bus was allowed to leave.

“Say this was Duke and they came on and saw Coach K, do you think they would have been checking our bags with dogs?” sophomore Mica Lambert said. “We’re a bus full of girls of color. A Black bus driver. I’m not surprised it went down this way at all. Frustrated, yes, but not surprised.”

The stop has triggered plenty of outrage, including from the Delaware State president, Delaware Gov. John Carney and other members of Congress.

“I have watched video of this incident – it is upsetting, concerning and disappointing," the governor said. "Moments like these should be relegated to part of our country’s complicated history, but they continue to occur with sad regularity in communities across our country.

"It’s especially hard when it impacts our own community. I’m proud of our students for handling the experience with remarkable composure, though I’m sorry they were made to go through it at all.”

“They, like me, are incensed,” Allen wrote in a letter to the DSU community. “We have also reached out to Georgia Law Enforcement and are exploring options for recourse – legal and otherwise – available to our student-athletes, our coaches, and the university.

"We do not intend to let this or any other incident like it pass idly by. We are prepared to go wherever the evidence leads us. We have video. We have allies. Perhaps more significantly, we have the courage of our convictions." 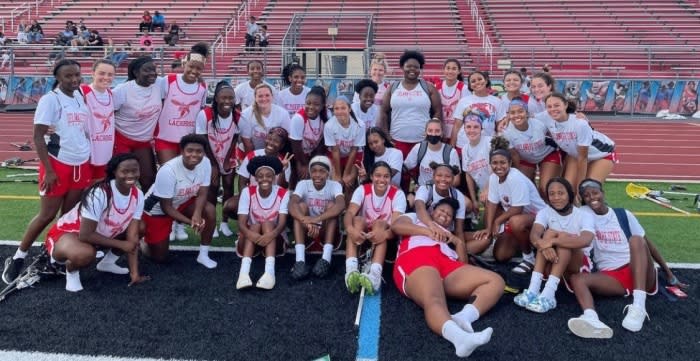