Soaring infections and deaths… but do the claims justify lockdowns?

Truth about the claims scaring us all to death: Soaring infections, teeming hospital wards, and terrifying death rates… but do the numbers justifying crippling new lockdowns REALLY stand up to scrutiny?

With half of Britain set to be plunged into stricter lockdowns from midnight tomorrow, you could be forgiven for thinking that, amidst all the doom and gloom, the threat of Covid-19 has never been so severe.

But as ROSS CLARK reveals, things might not be anywhere near as bad as the fear-mongers would have you think…

Claim: ICU beds in Liverpool are already 95 per cent full

On paper the 95 per cent statistic, revealed earlier this week by Liverpool city councillor Paul Brant, conjures up a disturbing image of overflowing hospitals and inadequate care.

So rest assured that it bears no relation to reality. Indeed on Thursday, Liverpool University Hospitals NHS Foundation Trust dismissed Mr Brant’s claim, insisting that its units were only 80 per cent full with just 47 of its 61 critical care beds occupied.

That may still seem high, but it is actually perfectly normal for ICU beds to be full at this time of year. 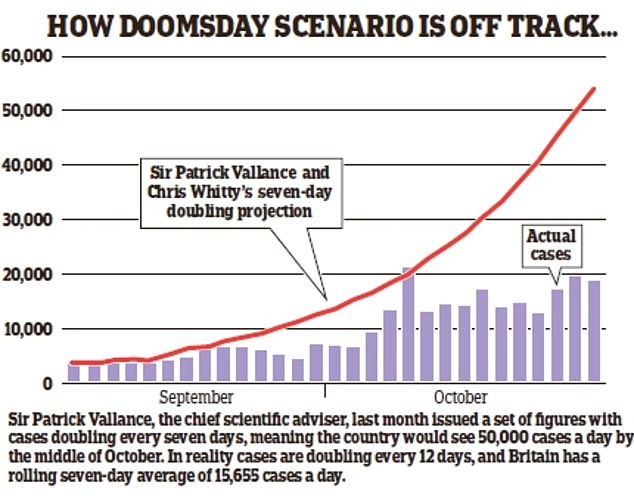 Half of Britain are set to be plunged into stricter lockdowns from midnight tomorrow. But ROSS CLARK says things might not be as bad as the fear-mongers would have you think

Meanwhile, if there is a surge in demand for intensive care beds for Covid-19 patients, let’s not forget how quickly the NHS was able to repurpose general and acute care hospital beds during the first coronavirus spike.

In fact, only on Thursday Liverpool’s Aintree University Hospital revealed that it has already fitted 40 beds with ventilators and a further 30 beds with specialist CPAP breathing equipment.

Such fears date all the way back to March, when the World Health Organisation morosely announced at a press conference that the virus had a mortality rate of 3.2 per cent.

But that figure was based on a crude calculation that divides the number of deaths by the number of confirmed cases of infection.

As we know from antibody tests, which show that many people have had Covid-19 without knowing it and without being tested, most cases have actually gone unrecorded.

To accurately work out the death rate, we must focus on something called the Infection Fatality Rate (IFR) – which is the number of deaths divided by the number of actual cases.

Scientists at Imperial College London originally estimated the IFR for Covid at 0.9 per cent, and an updated estimate has put it at 0.66 per cent.

And many even believe the figure to be far lower.

One paper published in the Bulletin of the World Health Organisation this week by John Ioannidis, a Professor of Medicine at Stanford University, reviewed 61 studies from around the world that have calculated the IFR.

His analysis shows that their median – the middle figure – value for the IFR is 0.27 – suggesting that only four in every thousand people who have been infected with Covid-19 have died from it.

Claim: A second spike could cause twice as many deaths

This disturbing claim dates back to a report from July by the Academy of Medical Scientists – and commissioned by Chief Scientific Adviser Sir Patrick Vallance – which estimated there could be 119,000 deaths if a second spike coincided with a peak of winter flu.

Yet to reach that figure, the so-called ‘second wave’ would have to get significantly worse than it currently is. 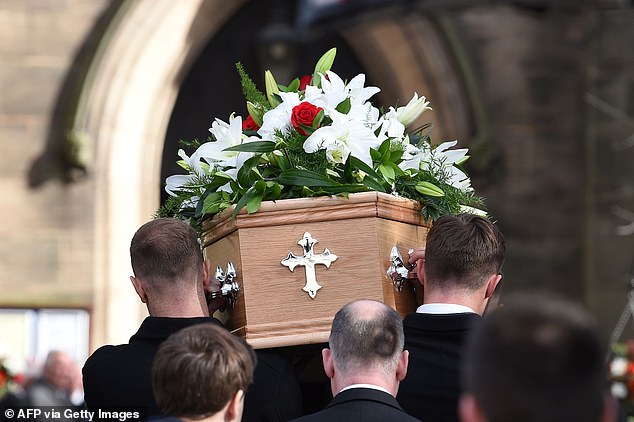 On Thursday, only 138 people died who had tested positive for Covid-19 in the past 28 days. Many of the most vulnerable people will – sadly – have already died in the first peak (file photo)

On Thursday, only 138 people died who had tested positive for Covid-19 in the past 28 days.

In comparison, at the height of the epidemic in the spring there were more than 1,000 deaths a day.

Such an improvement is hardly surprising given that treatments have improved and that many of the most vulnerable people will – sadly – have already died in the first peak.

Claim: The current wave of infection will tear through the elderly

Reality: We are far better prepared this time around

In response to the signing of the Great Barrington Declaration by more than 3,000 scientists last week – which called on governments to abandon one-size-fits-all lockdowns in favour of targeted shielding – Professor Stephen Powis, national medical director of NHS England, described the claim that ‘the elderly can somehow just be fenced off from risk’ as ‘wishful thinking’.

Of course, the elderly are considerably more vulnerable to Covid-19. Indeed, the average age of a coronavirus victim, according to analysis by the Oxford Centre for Evidence-Based Medicine, is 82.4 years.

But does this really warrant widespread panic? After all, it is significantly higher than the average age reached by people recorded as dying from all other causes, which is 81.5.

And don’t forget that a large portion of deaths among the elderly patients in the spring occurred because they were discharged from hospitals to care homes without being tested, and also because care home staff – many of whom didn’t have adequate protective equipment – were working across several care homes.

But now, elderly patients are routinely tested before being discharged to care homes, and the Department of Health’s winter plan has banned staff from working in more than one care home setting, which should help stop the spread of Covid-19 from home to home.

Claim: Hospitals are less prepared than this time in March

Reality: Doctors are far better equipped to fight the virus

An unnamed doctor at the Royal Liverpool Hospital was quoted on Thursday as saying that ‘before the first peak, elective surgery was curtailed so the hospital was pretty empty, staff were redeployed. [But] this time, there was no real curtailment of any elective work.’ 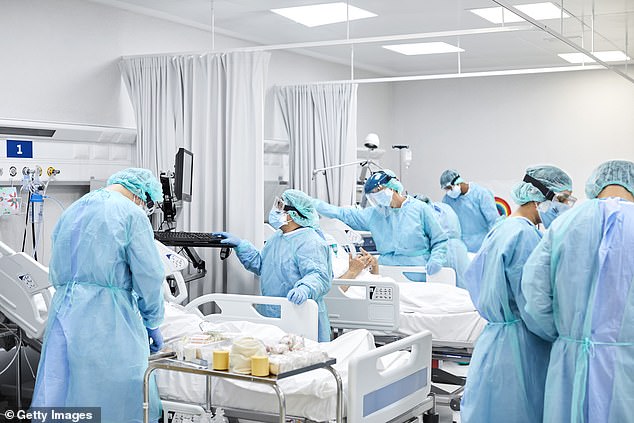 Yet before we start jumping to any apocalyptic conclusions about the readiness of our hospitals, it’s worth remembering that this is just one view of one doctor in one hospital.

Contrary to his panicked statement, it’s undeniably the case that intensive care doctors have learned a huge amount about how to treat Covid-19 over the past few months, such as when and when not to put patients on ventilators.

Claim: There’s no such thing as immunity

Reality: The chances of reinfection are low

Earlier this week, it was revealed that a 25-year-old man in the US caught Covid for the second time, leading the University of Nevada’s Dr Mark Pandori to warn that there could be ‘significant implications for our understanding of Covid-19 immunity’.

But it’s worth noting that researchers in Nevada have admitted that they are not entirely sure that the patient was actually reinfected.

Instead, they say, there’s a chance that the virus from his first infection had lain dormant and become reactivated inside his body.

More importantly, if being infected with Covid-19 did not give us immunity, at least for the short term, we would know it by now.

After all, there must be a reason why hundreds of thousands of people who have suffered from Covid-19 are not suffering second and third bouts of the disease.

Claim: We will never get to herd immunity

Reality: We shouldn’t rule it out

Speaking to the House of Commons earlier this week, Health Secretary Matt Hancock made the preposterous claim that ‘herd immunity is a flawed goal without a vaccine, even if we could get to it, which we can’t’.

He backed this up by suggesting that a number of infectious diseases such as measles ‘never reach herd immunity’.

Since then, Mr Hancock has been corrected by Harvard University’s Dr Martin Kulldorff and Stanford’s Dr Jay Bhattacharya – who have pointed out that in the days before a vaccine, outbreaks of measles did end before everyone got infected, due to herd immunity. 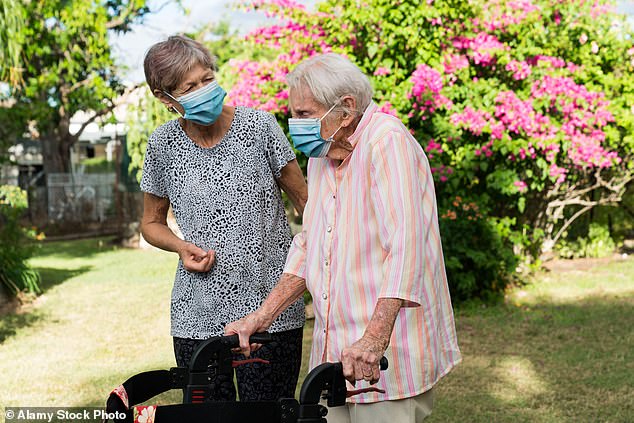 Elderly patients are routinely tested before being discharged to care homes, and a winter plan has banned staff from working in more than one care home setting (stock photo)

Meanwhile, although the Government’s scientific advisers have claimed herd immunity could be reached if around 60 percent of us have been infected, other scientists believe the figure to be much lower.

According to modelling by Gabriella Gomes of the Liverpool School of Tropical Medicine, we could gain herd immunity when just 10 to 20 per cent of us have had the disease.

According to a report published by the National Institute for Health Research on Thursday, there could be ‘significant psychological and social impacts’ on people living with long-term Covid-19, where their recovery is drawn out.

But while the phrase ‘long Covid’ may have a terrifying ring to it, it’s essential to note that delayed recovery is not uncommon with viral illnesses.

Meanwhile, don’t be fooled into thinking that such a prolonged reaction to Covid-19 is common. In fact, many people infected with Covid-19 – up to 80 per cent according to some studies – don’t suffer any symptoms in the first place.

Claim: Only a ‘circuit breaker’ will stop virus

Reality: It will only delay the inevitable

On Wednesday, Claudia Paoloni, president of The Hospital Consultants and Specialists Association, grimly warned that ‘we find ourselves in an inimitable situation in that [locking down the entire country for two weeks will] buy ourselves some time’ and suppress the virus.

Moreover, Matt Keeling, a mathematician at the University of Warwick, recently estimated that a two-week circuit breaker could save 8,000 lives.

Yet even Sage, the Government’s Scientific Advisory Group for Emergencies which called for a temporary circuit breaker lockdown three weeks ago, admits that doing so would only delay the epidemic by 28 days.

In other words, if we locked down tomorrow, by the end of October we would merely be back with the infection rate we had at the beginning of the month. 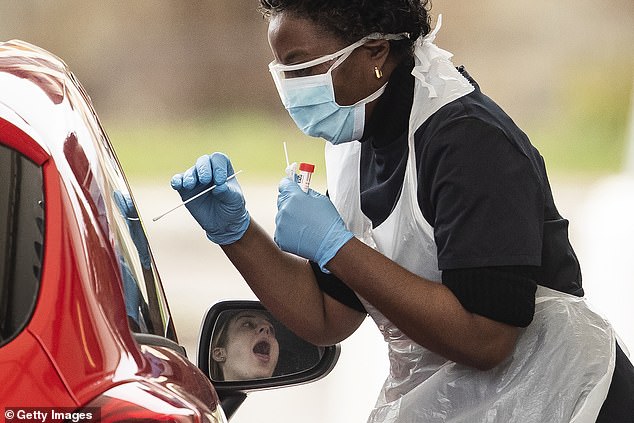 The current number of recorded infections, 19,000 on Wednesday alone, is at its highest ever. But that’s because we are carrying out more than 250,000 tests a day (file photo)

Claim: By locking down more quickly, the Scottish and Welsh governments have handled the pandemic better

Reality: The results have been the same

Certainly, Scottish First Minister Nicola Sturgeon and her Welsh counterpart Mark Drakeford have seized every opportunity to attack the Westminster Government and remind us that they are doing things better.

But while England was briefly recording significantly more cases and deaths than Scotland and Wales in the summer, that’s no longer the case.

In fact, recent analysis of the figures shows that there’s little to separate the three countries.

Over the past seven days, England has had on average 230 new infections per million inhabitants, while Scotland has 205 and Wales 213.

Claim: Infections are running higher now than when Britain went into lockdown in March

Reality: There is an increase in cases — but only because we are testing more

Yes, it’s true that the current number of recorded infections – 19,000 on Wednesday alone – is at its highest ever.

But that’s principally because we are now carrying out more than 250,000 tests a day – compared to less than 6,000 a day in mid-March.

Even in April, fewer than 10,000 people a day were being tested in Britain.

So while the number of positive tests coming back may seem significantly higher now, we are detecting more cases because we are testing more.

The Denial by Ross Clark is published by Lume Books