Washington: The Democrats’ push to convict Donald Trump of inciting the January 6 insurrection at the Capitol represents a “blatantly unconstitutional act of political vengeance”, the former president’s lawyers have argued at his impeachment trial.

In their opening statements, Trump’s lawyers said that their client never urged his supporters to behave violently and used rhetoric commonly deployed by politicians from both major parties by urging his supporters to “fight like hell” on the the day of the riot. 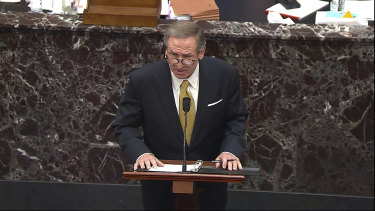 Trump’s lawyers sought to paint well-known Democrats – many of whom are serving as jurors in the trial – as hypocrites by playing lengthy video montages in which they used the term “fight” and voiced support for Black Lives Matter protests.

“Spare us the hypocrisy and false indignation … Under the standards of the House impeachment article, each of these individuals should be retroactively censured, expelled, punished or impeached for inciting violence by their supporters.”

Van der Veen said: “Unlike the left, president Trump has been entirely consistent in his opposition to mob violence. He opposes it in all forms, in all places.”

Trump’s lawyers repeatedly noted that, in a speech to supporters on January 6, Trump told his supporters to “peacefully and patriotically” make their voices heard by marching to the Capitol.

They also displayed a tweet Trump sent shortly after the riot began in which he urged his followers to support the Capitol police and “stay peaceful”.

The Democratic impeachment managers previously argued that the Capitol riot was the culmination of a months-long campaign by Trump to overturn the results of the election.

Van der Veen began his presentation by claiming that a leader of the far-left Antifa group had been arrested at the Capitol, even though no identified Antifa leaders have been arrested.

Trump lawyer David Schoen then accused the Democratic impeachment managers of “manipulating” their evidence against Trump by doctoring tweets and selectively editing video footage presented during the opening arguments.

The tweets in question – dated January 3, 2020 – were displayed in a photograph in The New York Times but not presented at the trial, a fact Schoen acknowledged.

(Both the defence and prosecution teams have had to recreate Trump’s tweets because Twitter has disabled his account, meaning his tweets are no longer visible.)

Trump’s lawyers are expected to use only around four hours of their allotted time to make their case, clearing the way for a final vote as early as Sunday (AEDT).

Only a handful of Republican senators, at most, are expected to vote to find Trump guilty of inciting the January 6 riot – well below the 17 Republican votes required in order to achieve a conviction.

It was widely agreed that Trump’s legal team had improved from the opening day of the trial, when they were widely mocked for a shambolic presentation.

Republican Senator Lisa Murkowski, a moderate who is open to convicting Trump, said Trump’s team had put together a “much stronger presentation” from day one and that they had been “very organised in what they’ve presented”.