Baby Sussex is ready for his close-up! Fans wait for their first glimpse of newborn tomorrow as Meghan insists a US broadcaster gets in on the act too

Confidante: Gayle King – pictured on her way to Meghan’s baby shower in New York – is one of the Duchess’s best friends

The Duke and Duchess of Sussex have insisted on a US broadcaster being present when they unveil their baby son to the world today – and have picked the channel fronted by one of Meghan’s best friends.

The couple have arranged for CBS, the network whose morning show is fronted by the duchess’s confidante Gayle King – a guest at her New York baby shower – to join a small British media contingent for the photocall at Windsor Castle.

The decision came as a surprise to British television channels including the BBC and ITV – not to mention many at Buckingham Palace.

It comes as royal fans wait for their first glimpse of the newborn in a photo shoot due to take place on Wednesday.

A source said last night the arrangements were made to ‘reflect the international interest in the story’.

But British broadcasters are said to be furious at the move and there is also concern among some in the royal household that the decision will look like a ‘slap in the face’ to Commonwealth broadcasters, particularly in countries such as Australia, Canada and New Zealand, where the Queen is still head of state.

‘It’s a decision that has taken everyone by surprise and has not gone down well in some quarters,’ one source said.

Last month Harry and Meghan’s office announced that while they wanted to keep details of the birth private, they had agreed to a very small photocall at Windsor a couple of days after the baby was born.

This was confirmed by the delighted prince in person on Monday, when he told journalists that he would see them again in two days.

Last month Harry and Meghan’s office announced that while they wanted to keep details of the birth private (pictured: Duke and Duchess of Sussex on March 14, 2019)

A small ‘pool’ of British professionals was picked, comprised of one television camera, one photographer and one reporter from the Press Association to ask questions. They will feed the footage, words and pictures to organisations worldwide.

But yesterday it emerged that Harry and American-born Meghan had specifically asked for a US camera crew to be included as well.

Initially it is believed that this was refused because, traditionally, only UK journalists are invited in order to ‘represent’ the British taxpayers who fund the monarchy. The couple seemingly insisted, however, even though it was pointed out that it could cause offence among Commonwealth organisations. 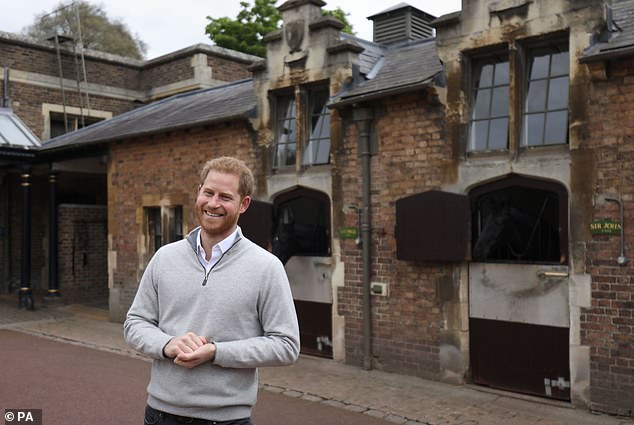 Buckingham Palace was not involved in the decision to pick CBS, with sources saying the US network was ‘self-selected’, causing some consternation among other domestic and international outlets. By coincidence – or not – the network’s morning show is hosted by Meghan’s great friend Miss King, who is also close to Oprah Winfrey, another a friend of the royal couple and a guest at their wedding.

Miss King came to the UK to cover the birth and visited the couple at Frogmore Cottage just a few days ago, but is understood to have returned to the US when it emerged the baby was overdue. Handily for her, it is expected that footage of Baby Sussex will be broadcast in America in time for her popular breakfast show, This Morning.

Last night a palace aide said: ‘There is an international cameraman accredited to the pool facility tomorrow. CBS will provide the cameraman.