London: One of the Britain’s most promising young athletes has ruled out flying to Australia for the junior world championships next month because of her deep concern about climate change.

Runner Innes FitzGerald, 16, is a rising star in UK athletics, having set a national under-17 record for 3000m and finished fourth in the 4000m race at the under-20s European Cross Country Championships in Turin last month against athletes three years older. 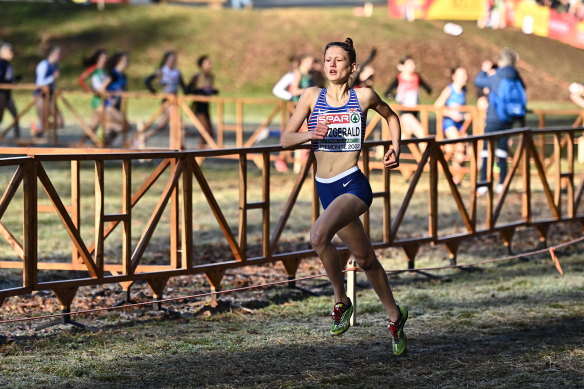 Innes Fitzgerald of Great Britain, competing in the U20 women’s 4000m during the SPAR European Cross Country Championships at Piemonte-La Mandria Park in Turin, Italy in December.Credit:Getty

She led the field for a significant part of the race despite her preparation being interrupted by a 20-hour journey to northern Italy by coach and train. FitzGerald and her family also cycled on fold-up bikes to get from station to station.

The teenager, whom the British press has dubbed the “Greta Thunberg of sport”, wrote to the sport’s governing body this week to say she was not available for selection because she could not in good conscience make the trip to the championships in Bathurst, NSW, in February.

“To have the opportunity to compete for Great Britain in Australia is a privilege,” she wrote. “When I started running, the prospect of me competing in the World Cross Country Championships would have seemed merely a dream. However, the reality of the travel fills me with deep concern.

“I was just nine when the COP21 Paris Climate agreement was signed. Now, eight years on, and global emissions have been steadily increasing, sending us on a path to climate catastrophe.”

She said she would “never be comfortable” flying in the knowledge that people could be losing their livelihoods, homes and loved ones as a result.

“The least I can do is voice my solidarity with those suffering on the front line of climate breakdown. Coming to a decision has not been easy, however little compares to the grief I would feel taking the flight.”

FitzGerald, from Devon, burst on the scene last year when she smashed the UK under-17 women’s 3000m record with 8:59.67 in Belfast in July. She has since enjoyed runaway victories in the Mini London Marathon and Euro Cross trials in Liverpool.

Her performances last year could have led to her racing at the European Under-18 Championships in Jerusalem but, again, she ruled out competing because of concern over flight emissions.

In an interview with Athletics Weekly, she said her family was as environmentally minded as her.

“We live in a passive house on a smallholding [near Exeter] growing fruit and vegetables,” she said. So my dad was happy for us not to fly. Aviation is the most energy-intensive activity we can do and explodes a person’s carbon footprint. I don’t want that on my conscience.”

Champions for Earth, an organisation for environmentally friendly athletes, described her circumstance as a “tortured decision to decline” the opportunity to compete on the world stage.

“As a young person with Olympic dreams growing up during a climate and ecological emergency, she is balancing the dream of one day becoming a champion of the world, with a determination to be a champion for earth,” the organisation said.