State budget has to deliver and avoid past mistakes

This month’s state budget must not only deliver during a time of historic crisis. It must avoid the mistakes of recent budgets. 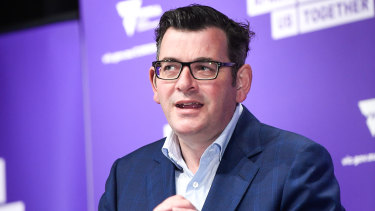 Daniel Andrews: state budget will be the “biggest in the state’s history”.Credit:Justin McManus

The atmosphere has been made more intense not only by the sheer magnitude of the COVID-19 challenges we face, but by the Premier’s remarks that this next state budget will be the “biggest in the state’s history”.

We can only hope that expectations will be met this time and not dashed as they were recently in the lead-up to the government’s road map announcement and support for businesses, in particular.

It’s fair to observe that the government needs to do a much better job at managing expectations than it has over recent weeks. The road map was only one example. The government fuelled expectations that answers would be forthcoming during the hotel quarantine inquiry and any objective person can only conclude that the evidence to the inquiry has left the community exasperated at best and seething at worst.

If the lessons that these and other recent controversies provide do not temper the Premier’s language around this month’s state budget, then nothing will.

For Victoria’s, and the country’s, sake we should all hope that the budget delivers. But to do so the government must steer clear of earlier missteps.

The most important challenge is that the budget must be a prescription for the actual challenges we face. Words like “recession” and “downturn” do not do justice in explaining why we are in the predicament we find ourselves in. The fairest word to describe what we are going through is a “shutdown”. We are not in the predicament we are in because of market failure, a collapse on stock exchanges around the world or the bursting of bloated asset bubbles.

The budget needs to recognise that the precipitous fall in employment across the country, exacerbated by Victoria’s stage 4 lockdown, has been caused directly by government decisions based on public health orders, in many respects justified. The government needs to outline solutions to provide support to help those businesses open up and operate in a COVID-safe manner.

This is all the more important in Victoria which, since March, has suffered the largest drop in employment anywhere in the country, a fall of more than 5.5 per cent. Our second-wave outbreak has had national implications too, hitting GDP growth by about 2 per cent in the September quarter 2020 alone.

Based on past budgets, and the government’s recent electoral successes, the expectation is that the state budget will involve announcements of a further tranche of infrastructure projects. No one will seriously object so long as a few other key conditions are met.

To revive Victoria’s economy, businesses and households need immediate cash-flow support and relief from financial distress. By way of comparison, this week’s federal budget has outlined a spending program that will see 90 per cent of additional expenditure in the first two years of the forward estimates.

If Victoria’s budget is focused predominantly on an infrastructure program, the government must ensure spending is occurring now, when it is desperately needed, and not in the back end of the estimates period.

Here the government must avoid some obvious risks. First, as much as the government might strive for positive media around announcements of new infrastructure projects, a media plan will not substitute for urgent stimulus measures.

Secondly, there can be no excuses if announcements of infrastructure projects are made without fully developed business cases. It was the government’s choice to institute a crisis cabinet so it will face fitting criticism if it can’t show that it has done the work during the current shutdown to develop sound project analysis for each initiative.

If you doubt that this is a problem, just remember that with more than two years having elapsed since the announcement of the suburban rail loop, no business case has been released.

Thirdly, the government must avoid the significant cost overruns that have blighted the Melbourne Metro project, West Gate Tunnel project and Murray Darling Murray Basin Rail project, among others. The public's comfort level right now with stimulus spending, involving significant new debt and deficits well into the next decade, doesn't mean governments are off the hook to manage projects soundly and on budget.

The combined cost overruns on Victoria's current portfolio of capital projects isn't far off the actual cost of those projects when initially announced.

A fourth objective must involve improvements to the competitive processes for the letting of any new infrastructure projects. Just last year, Victoria’s auditor-general slammed the process around the West Gate Tunnel project. There can be no excuses this time around.

And nor can the government argue that it hasn't had time to do the preparatory work to ensure that a new tranche of infrastructure projects is not mismanaged. The Premier has made his call to appear at daily press conferences for between one and two hours and also to fundamentally circumscribe normal cabinet processes. If that has compromised the government's ability to present the best possible budget plan, then that is something the public will duly criticise.

Finally, the budget must be the product of genuine consultation, including with business stakeholders and businesses themselves, who will be so important to Victoria's long-term recovery. Back in April the government forecast an unemployment rate of 11 per cent by the end of this year. That number is made up almost entirely of private sector jobs.

Along with all the normal fiscal priorities, this month’s budget must include regeneration of a private sector devastated by severe lockdowns. And, unless the government can find a way to start opening up Victoria’s economy again, it may not even matter what’s in the budget.

John Pesutto is a senior fellow at the school of government at Melbourne University, a panellist on ABC Melbourne’s The Party Line and was Victoria’s shadow attorney-general from 2014-18.

The most important news, analysis and insights delivered to your inbox at the start and end of each day. Sign up here.