After a day of giving coronavirus vaccinations, Michael Weber and his team were headed back to Grants Pass, Oregon, to administer their last doses on Tuesday when traffic suddenly came to a halt. Authorities had closed the snow-covered highway because of a car accident, and it would be hours before traffic could resume.

But Weber and his team of 20 staff members and volunteers didn’t have that much time to use the six Moderna doses they had left before the vaccines expired. 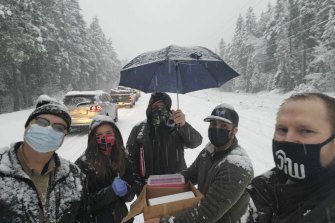 That’s when Weber had an idea: If he couldn’t make it to the clinic on time, he could bring the clinic to six other drivers stranded on the highway.

The impromptu vaccination session amid a snowstorm is the latest example of healthcare workers scrambling to make use of leftover doses during a sometimes chaotic rollout that’s seen around 21.1 million people receive one or both doses of the vaccine in the United States.

Weber’s six leftover Moderna doses, which had already been transferred to syringes earlier on Tuesday, needed to be used quickly or discarded. Like the Pfizer version, the Moderna vaccine must be used within six hours after being removed from sub-zero storage and reaching room temperature.

“We knew the vaccine would not make it back to Grants Pass,” said Weber, 40. “In all likelihood, it was going to expire.“

After consulting with his team, Weber and four staff members trekked through the snow, knocking on car windows in search of six lucky arms. 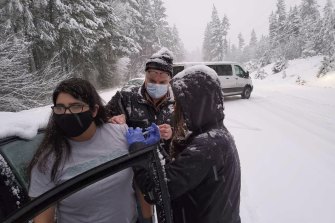 The team went car-to-car and introduced themselves as county health officials stuck in the snowstorm.Credit:Josephine County Public Health

One team member carried a bin with the vaccines, alcohol, gauze and other medical supplies. Weber, who was in charge of the vaccination paperwork, carried the forms inside his coat. Others carried a container for used needles and an umbrella for the heavy snow.

An ambulance that had accompanied them during a vaccination session at a high school earlier that day was also present and ready to treat anyone in the rare case they suffered an allergic reaction, Weber added.

“We were a little nervous because not a lot of people in this part of the state are eager to get the vaccine at this point in time,” said Candelaria, 61.

The team went car-to-car and introduced themselves as county health officials stuck in the snowstorm, who, incidentally, had vaccine doses for a virus that has killed more than 427,000 Americans, including close to 2000 in Oregon.

It took Weber and his team about 45 minutes to administer the six vaccine doses.

“We went through a lot of cars before we found six yeses,” Weber said.

While most people politely declined, Weber said, those who said yes could hardly contain their excitement.

“I can’t imagine a better way to spend four hours stuck in a snowstorm,” Weber said.

One man, Candelaria recalled, was so ecstatic that he got out of his car and took his shirt off in the middle of the snowstorm so the team could inoculate him. Another woman was so taken aback by the surprise vaccine that she could hardly sign the paperwork, her hands were trembling so much from excitement. The last person to get a leftover vaccination was a woman who didn’t make it on time to her appointment earlier that day.

“It was meant to be for her,” Candelaria said.

Get our Coronavirus Update newsletter

Stay across the news you need to know related to the pandemic. Sent Monday and Thursday. Sign up here.