Sudan will be removed from the state sponsor of terrorism list after agreeing to pay $335million compensation victims of Al Qaeda attacks, Donald Trump has said.

The President tweeted the news on Monday, calling it ‘justice for the American people and a big step for Sudan’.

The move means that Sudan, which has been on the list since 1993, will qualify for aid and loans to prop up its faltering economy amid a transition to democracy. 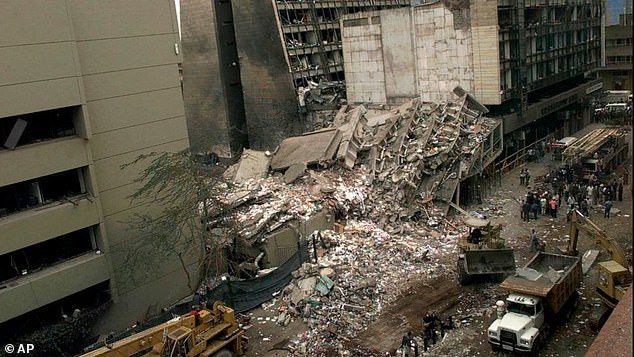 Sudan has agreed to pay victims of two US embassy bombings in 1998 (pictured, the attack in Kenya) $335million in return for being taken off the state sponsor of terror list 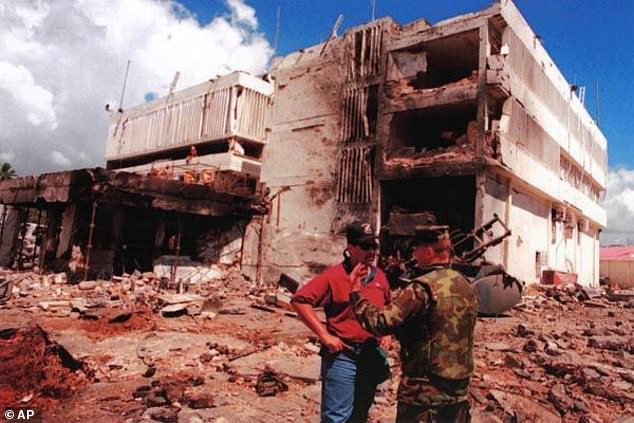 200 people, including 12 Americans, died in bombings carried out on US embassies in Nairobi and Dar-es-Salaam (pictured) by Al Qaeda terrorists while leader Bin Laden was in Sudan

‘Once deposited, I will lift Sudan from the State Sponsors of Terrorism list. At long last, JUSTICE for the American people and BIG step for Sudan!’

The agreement will see compensation paid to the victims of joint Al Qaeda bombings at the US embassies in Kenya and Tanzania in 1998, and the attack on the USS Cole in 2000.

America holds Sudan responsible because Osama bin Laden, who was hiding in the country at the time, orchestrated the attacks. The terror attackers were also recruited in Sudan.

More than 200 people died in the embassy attacks, including 12 Americans. Seventeen US sailors died in the attack on the Cole.

The agreement means Sudan will pay up to $10million for each U.S. government official killed in the U.S. Embassy bombings, and $800,000 for foreign employees, Foreign Policy previously reported.

Americans injured in the attack are expected to get between $3million and $10 million, while foreign nationals injured will receive up to $400,000

He said in a tweet that the removal would come ‘in recognition of the historic change that has taken place in Sudan.’

Sudan is on a fragile path to democracy after a popular uprising last year led the military to overthrow autocratic leader Omar al-Bashir in April 2019. 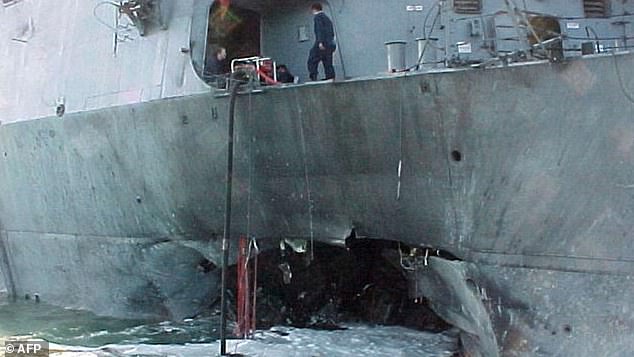 The settlement also covers the attack on the USS Cole in 2000, during which terrorists recruited in Sudan killed 17 US sailors in a bombing (pictured)

A military-civilian government now rules the country, with elections due in late 2022.

However, an unstable economy has been threatening to derail the process and open the country up to further unrest and violence.

Inflation hit 212 per cent last month, amid widespread shortages of food and medicines.

In an address to the nation, Prime Minister Abdalla Hamdok said getting off the list would help his government benefit from debt relief and access foreign loans and investments, which are seen as the country’s gateway to economic recovery.

The country has more than $60billion in foreign debt, he said.

‘It’s a long way,’ he said. ‘It needs serious planning and hard work to achieve the maximum benefit of this opportunity.’

Once the compensation money has been deposited, Trump is to sign an order removing Sudan from the terrorism list, on which it has languished under heavy American sanctions for 27 years.

Congress is then expected to act to restore Sudan’s sovereign immunity, which would effectively stop future compensation claims from being filed against it in U.S.

Meanwhile, Sudan is to begin the process of normalizing relations with Israel, possibly with Israeli Prime Minister Benjamin Netanyahu joining a congratulatory phone call between Trump and Hamdok.

The designation of Sudan as a state sponsor of terrorism dates back to the 1990s, when Sudan briefly hosted bin Laden and other wanted militants.

Sudan was also believed to have served as a pipeline for Iran to supply weapons to Palestinian militants in the Gaza Strip.

The ‘state sponsors of terrorism’ designation is one of the U.S. government’s most effective sanctions tools and bars virtually all non-humanitarian U.S. transactions with countries on it.

Donald Trump announced the news over Twitter on Monday, calling it ‘justice for the American people and a big step for Sudan’

It was created in 1979 to punish nations that fund or otherwise support terrorist acts. With Sudan’s removal, only Iran, North Korea and Syria will remain on the list.

Some victims denounced the settlement; others urged Congress to pass legislation needed to implement the agreement.

More than 500 of the 700 victims of the 1998 bombings at the U.S. embassies signed a letter rejecting Sudan’s settlement offer, partly because it would award more money to Americans than Africans who worked there.

The letter said the plan offers compensation dependent on a victim’s nation of birth, rather than the severity of injuries.

‘This scheme would pay nothing at all to nearly a third of the embassy victims and categorizes naturalized U.S. citizens as non-Americans,’ the letter said.

Jack Quinn, counsel for the 9/11 families that sued Sudan, also expressed displeasure at the announcement.

‘The 9/11 families are counting on Congress to reject Sudan’s plea that our pending lawsuits be wiped out, and they insist it do nothing that would undermine them,’ Quinn said.

However, Edith Bartley, spokesperson for the families of the Americans killed in the embassy bombing in Nairobi, Kenya, thanked the State Department and the new government in Sudan for securing compensation for the victims. 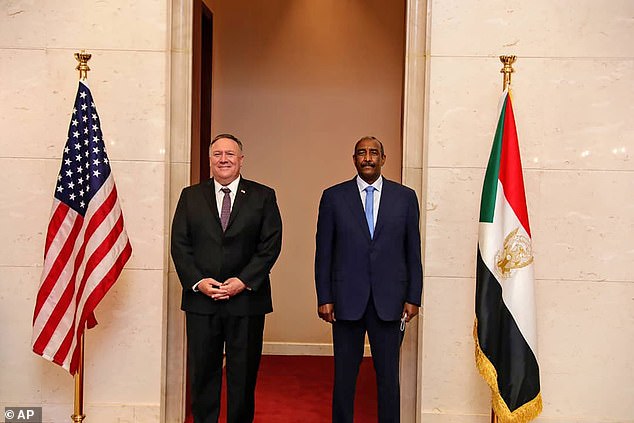 The deal comes after Sudanese dictator Omar al-Bashir was overthrown in a coup, and the transitional government started negotiations to get off the list (pictured, Mike Pompeo meets General Abdel-Fattah Burhan in Khartoum in August)

She said that once released, the compensation will fulfill a longstanding commitment to the victims first made by President George W. Bush, honored by President Barack Obama and now affirmed by Trump.

‘We urge Congress to immediately pass the legislation that is needed to implement the agreement, and begin the payment process,’ she said.

‘The victims, and our regional allies who wish to have Sudan emerge as a economically viable supporter of regional peace, are depending on Congress to act swiftly in support of this effort.’

Jonathan Schanzer at the Washington-based Foundation for Defense of Democracies said removing Sudan from the terrorism list is an important achievement because Khartoum has helped fight Sunni extremists for nearly two decades and has worked to remove Iranian influence from Sudan since 2012.

‘In this way, the country has addressed the reasons for its original listing as a state sponsor of terrorism,’ he said.

Schanzer, a former terrorism finance analyst at the Treasury Department, said now that the delisting is to occur, it will important for the Trump administration to prioritize a normalization agreement.

‘The stars are aligned for such a deal,’ he said. ‘It just needs a push.’