It speaks volumes about our education system that an increasing number of young people are choosing to not sit their final exams, finishing secondary school instead with what’s known as an unscored VCE. 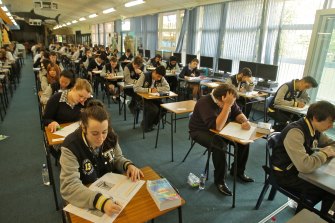 Some young people sought to relieve the pressure of remote learning by removing the final hurdle of exams.Credit:Ken Irwin

What was once a quirk hidden in the Victorian Curriculum and Assessment Authority’s fine print has now become an option for thousands of students, and must be a matter of serious consideration for educators and parents.

In 2018, 2072 Victorian students chose to graduate “unscored”, which meant they left school with their VCE certificate but without an Australian Tertiary Admission Rank, or ATAR, the commonly used path into further education and a requirement for many of the more popular courses. By 2021, The Age revealed on Monday, that figure had more than doubled to a record 5373, making the proportion of unscored school leavers now one in 10.

As education editor Adam Carey reported, principals believe the increase is largely driven by students choosing to prioritise their mental health, keen to stay in school but without the pressure of exams, and by students who have pathways, such as entering a trade or employment, that don’t require an ATAR.

No doubt the pandemic turbocharged the trend as some young people sought to relieve the pressure of remote learning by removing the final hurdle of exams (there were, we recall, even serious calls to temporarily scrap exams altogether).

There may also be a more sinister contributor: in 2017 The Age uncovered evidence that some private schools were pressuring struggling students to go “unscored” to improve the schools’ overall grade average. We editorialised at the time: “This crude strategy to manipulate median final scores is cruelly marginalising students who with appropriate support could successfully complete school and embark on tertiary education.”

While skulduggery might yet remain a small contributing factor, a subsequent investigation by the Victorian Curriculum and Assessment Authority found the rise in numbers was strongly linked to schools supporting students with mental health issues who would “find it extremely stressful or impossible to complete a scored VCE program”.

Clearly, for some vulnerable young people amid a youth mental health crisis, the unscored option is a vital Plan B, a valve that relieves the pressure and helps them to stay in school. It also seems sensible that those with no interest in a university education be spared the horrors of final exams.

We are concerned, however, about what Bendigo principal Dale Pearce calls a “contagion effect”, with peers normalising a choice that would have once seemed highly unusual. “Where I get concerned,” he said, “is when we have students capable of doing quite well but [they] make a decision to go unscored for the wrong reasons.”

VCAT, meantime, strongly advises students to stay the course, if they can, saying that “scored assessment provides a more detailed record of student achievement and is the best way to maximise opportunities and pathways to further education and training”. Opting out necessarily reduces the number of future options; choosing to go unscored is not a decision to be taken lightly.

And yet, as many have explained, an ATAR is not life-defining. You don’t even need one for some avenues to further study. In the United States, several major universities, including Harvard, are trialling zero-test entry policies, partly in a response to the pandemic and partly to diversify their student base. We watch with interest: if a better pathway to further education exists, it is worthy of consideration.

Gay Alcorn sends a newsletter to subscribers each week. Sign up to receive her Note from the Editor.