With the eyes of the world set to turn to Moscow next week, final preparations for a huge military parade are under way.

Ukraine, Russian citizens and Western leaders alike wait nervously to see if Vladimir Putin will use the event to make a major announcement escalating the ongoing conflict.

Tanks were seen rolling through the Russian capital and fighter jets streaked above Red Square, days before the the president is expected to appear in the capital.

A military parade is held on May 9 in Moscow every year to coincide with the anniversary of the surrender of Nazi Germany in 1945.

The patriotic commemoration was inaugurated to remember those killed during the Second World War and has been a national public holiday since the mid-1960s.

But in the context of the onslaught against Ukraine, this year’s event will take on a very different meaning.

The Russian president is waging a propaganda campaign to suppress domestic dissent over his illegal invasion, even banning the word ‘war’ in law and insisting on the phrase ‘special military operation’.

The Z symbol, which is used to mark tanks involved in the Ukraine invasion but has become a pro-war symbol, looks set to feature heavily. 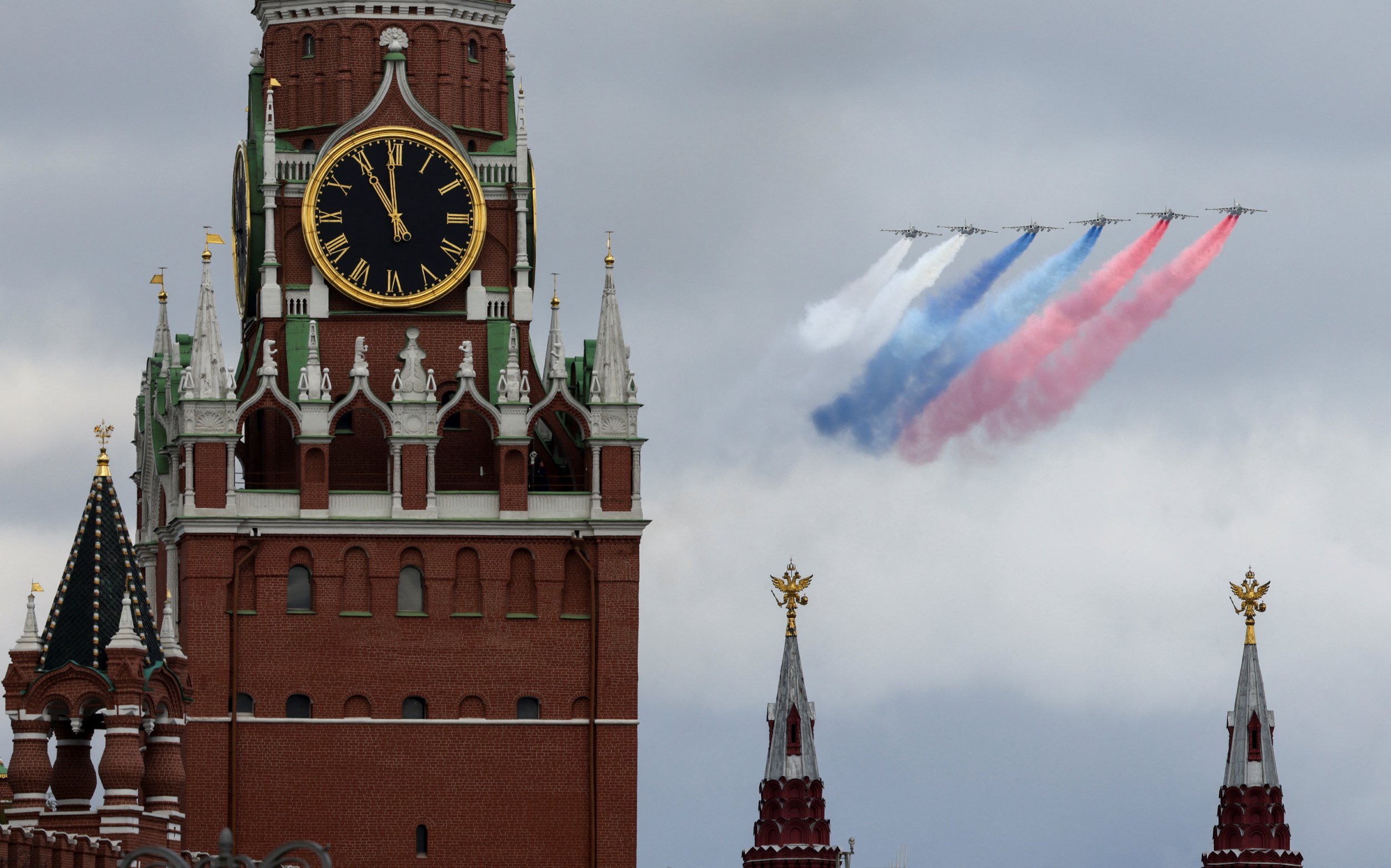 Fighter jets flying in a Z-formation were pictured above Moscow while a large Z adorned a building in the colours of the ribbon of Saint George, a feature of Russia’s most prestigious military medals.

By Monday, an incursion which the Kremlin believed would lead to the collapse of the Ukrainian state within a week will be on its 74th day.

Mr Putin has little to show for his war efforts so far. Russia has lost thousands of men, its military is weakened and Volodymyr Zelensky’s government is still intact.

Weeks after he was forced to abandon efforts to seize Kyiv in the face of staunch resistance, the attempted annexation of the east of the country and at least some of the southern coast have made limited gains.

Western military officials have previously predicted Mr Putin will use the May 9 occasion to declare some sort of ‘victory’, probably involving the capture of the destroyed city of Mariupol.

Russian forces have resumed efforts to defeat the last remaining Ukrainian forces holed up in the Azovstal steel plant in recent days, a move which is seen by some observers as timed to coincide with Victory Day.

The city’s legitimate mayor has previously claimed a puppet leader installed in the city is under orders to clear it of rubble and dead bodies for a parade on May 9.

Mariupol falling into total Russian control would theoretically allow Mr Putin to say he has established an unbroken land connection between Russia and territory in the Donbas region and Crimean peninsula held by pro-Moscow forces since 2014.

With anything approaching a conclusive victory still out of reach for Mr Putin, British defence secretary Ben Wallace has speculated he may instead use the occasion to declare all-out war on Ukraine.

Some Russian hard-liners have been pushing for a wider mobilisation than the current operation, which only involves military assets.

A declaration of war would likely be accompanied by the imposition of martial law at home, the call up of military reserves, more conscription and economic measures to fund the invasion.

Mr Wallace told LBC last week: ‘He’s been rolling the pitch, laying the ground for being able to say, “Look, this is now a war against Nazis, and what I need is more people”.’