Friends and family are mourning the loss of a 17-year-old boy who was fatally stabbed at a junior basketball game in Melbourne’s west on Friday night.

Bless Mulukwat Akoch was attacked just before 6pm inside Eagle Stadium in Werribee and was rushed to hospital with life-threatening injuries where he later died. 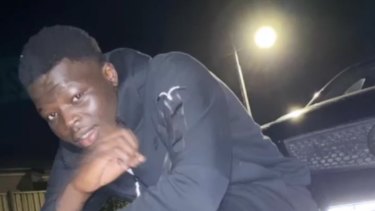 Bless Mulukwat Akoch was attacked just before 6pm inside Eagle Stadium in Werribee.

Emergency services were called to the sporting complex on Ballan Road after reports the Wyndham Vale teenager had been injured.

A 15-year-old boy was arrested in connection with the stabbing but released shortly after without charge. Homicide Squad detectives are continuing to investigate the incident.

A friend of Mr Akoch, Epz Solomona, published a tribute for his slain friend, saying Mr Akoch had “taught [him] everything, the good, the bad, the ugly”.

“Since the beginning you embraced me,” the tribute reads, “we have a love-hate relationship but you helped me make me who I am today.”

“Before I signed any contract ever in my life, I signed myself to you. The streets and I promise too [sic] represent you forever.”

Mr Akoch, known affectionately as ‘D’Roy’ amongst friends, was a year 12 student at Good News Lutheran College in Tarneit in Melbourne’s west.

“Bless was a diligent young man, who took pride in his education and was determined to graduate from Good News Lutheran College this year,” Ms Taban wrote. 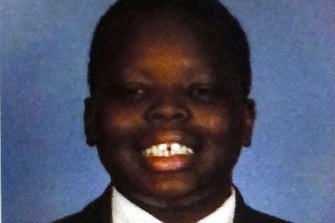 “It is highly unfortunate that he was taken away from this world so soon, as he was barely able to celebrate his 18th birthday.”

The assailants remain on the run.