A burst water main has flooded streets in south-west London as temperatures soared across the UK – causing chaos for families.

Around 70 firefighters and 10 fire engines responded to the scene on Galsworthy Road in Kingston upon Thames on Monday morning, alongside the police.

Footage shared on social media shows flooding on several roads which have been closed nearby.

Thames Water has said the broken 30-inch pipe does not supply homes so water should not be affected, adding that the conduit is a trunk main and not a sewage pipe as some witnesses claimed.

‘Our engineers are tackling a large burst pipe on Kingston Hill. They’re working to shut down the flow of water from the damaged section,’ it said in a statement.

‘We’ll be doing all we can to repair it and get things back to normal as soon as we can, particularly in the current heatwave.

‘We’ll need to carry out a major repair, so there’s likely to be a need for a road closure. We’re sorry for any inconvenience this causes.’ 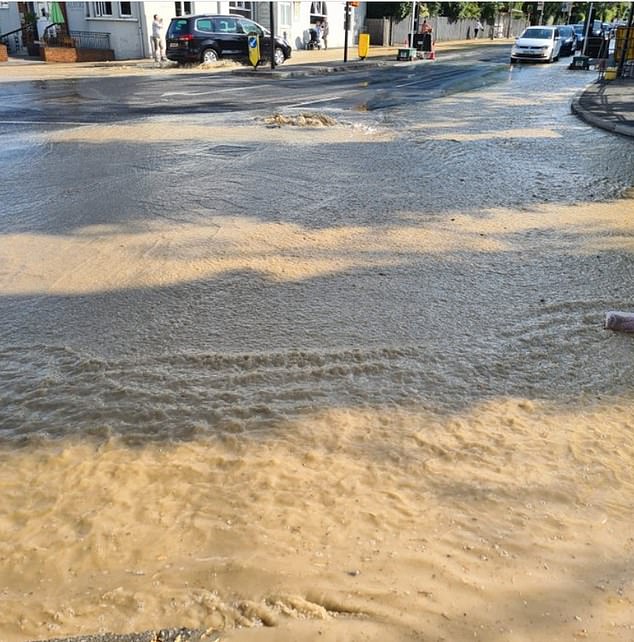 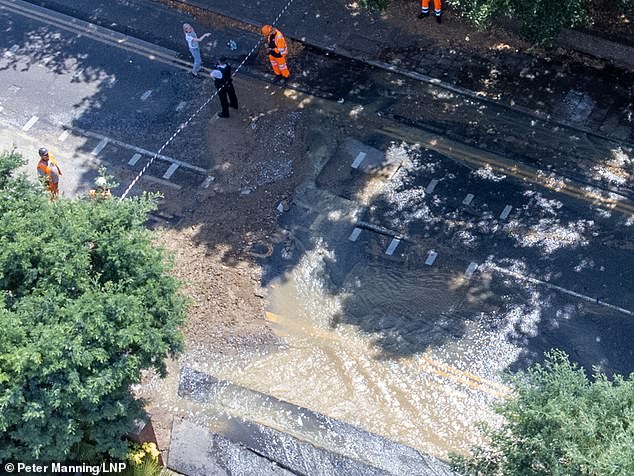 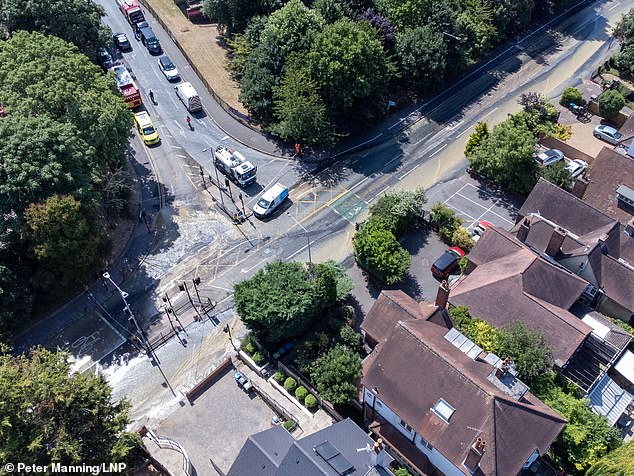 Thames Water said it would be a  major repair, so it was likely to be a need for a road closure

‘Patients who need to come in can still enter the hospital site through the main car park entrance, via Coombe (road).’

London Fire Brigade said: ‘Firefighters are dealing with a large burst water main and is causing a number of road closures.

‘Please avoid the area if possible.’

Britons have been enduring intense heat this afternoon on what looks set to be the UK’s hottest day on record – with trains cancelled, hospital appointments axed and schools closed amid warnings that healthy people could die. 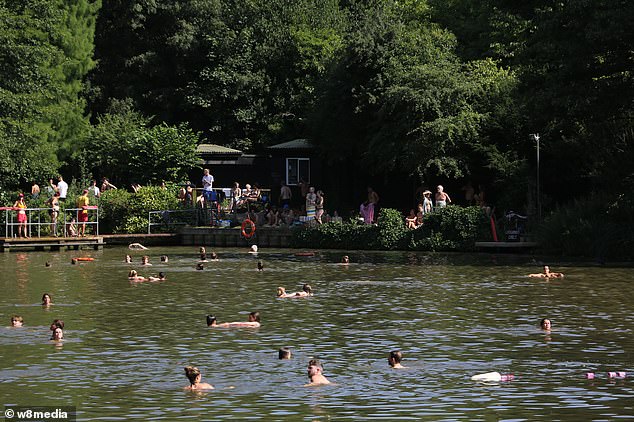 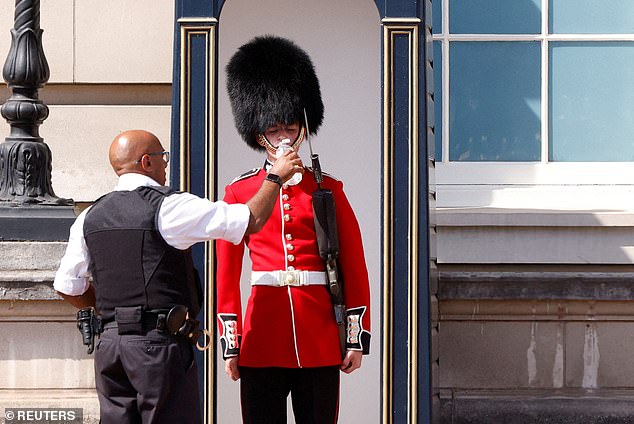 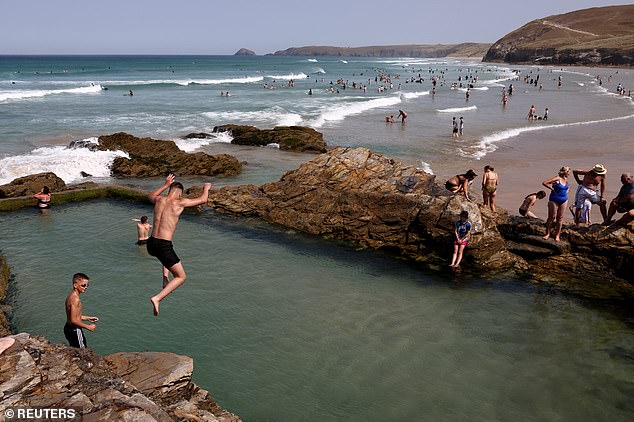 With the UK set to be hotter than the Sahara Desert, transport links in London were already grinding to a halt due to train cancellations – while roads could melt and bosses have urged employees to work from home.

Health chiefs told patients to stay away unless it is an emergency amid fears hospitals will be overwhelmed, while emergency services urged swimmers to stay away from lakes and rivers in case they face difficulties.

Some schools in Nottinghamshire, Hampshire and Oxfordshire have shut while others will close early – and water providers have also warned of shortages, while a burst water main caused chaos in Kingston upon Thames.

Some 53 schools in Buckinghamshire have closed and reverted to remote learning. Elsewhere, Northwood Community Primary School in Kirkby, Merseyside, said that sports day had been axed today; while King Charles I School, a secondary school in Worcestershire, has cancelled all on-site detentions both today and tomorrow.

Professor Endersby told BBC Radio 4’s Today programme this morning: ‘We think today we may well see the hottest day in the UK in history, with the hottest temperatures in the South East, but actually the highest temperatures we expect tomorrow, and those temperatures will be further north as that warm air pushes north. 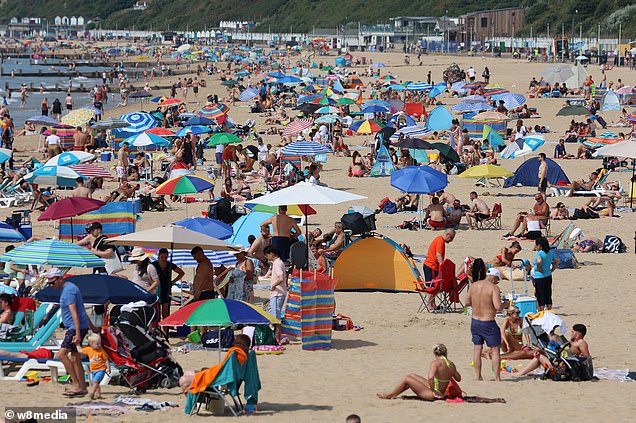 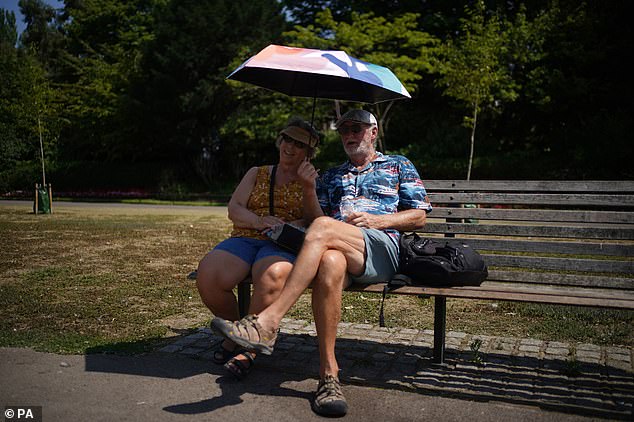 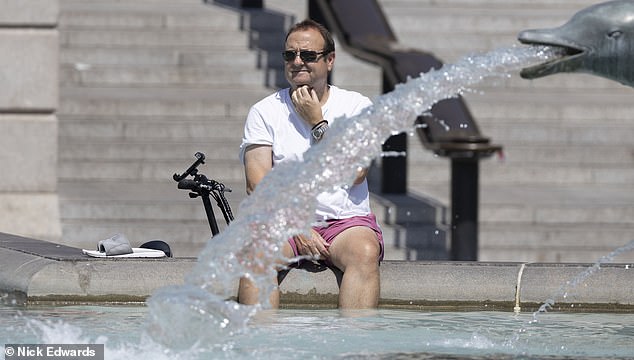 ‘It’s tomorrow that we’re really seeing the higher chance of 40C and temperatures above that. Even possibly above that… 41C isn’t off the cards. We’ve even got some 43Cs in the model but we’re hoping it won’t be as high as that.’

One GP surgery in Hertfordshire had to close a site today because it has no air conditioning; others in London have texted patients to warn them of reduced services with limited clinic rooms in operation; and Milton Keynes University Hospital said it was ‘standing down routine outpatient appointments and surgery’ today and tomorrow.

In Cardiff, a children’s hospital’s cancer ward at Noah’s Ark Children’s Hospital was left without air conditioning after the unit failed in hot weather. Engineers were working to fix the fault affecting the chemotherapy area – and health chiefs said that if the problem cannot be solved, patients will be moved to a different ward to keep cool.

As health officials declared a ‘national emergency’, rail chaos was already affecting parts of London this morning – with the Overground suspended between Willesden Junction and Richmond, and Romford and Upminster.

On the Underground, the District, Central, Bakerloo and Jubilee lines all had severe delays while the Hammersmith & City Line was completely axed due to ‘heat related restrictions’ and there was no Metropolitan line between Baker Street and Aldgate. Transport for London told all passengers in the capital to avoid non-essential travel.