Home » The Melbourne suburbs with too much lead in veggie gardens

When Julie Heller and her young family moved into their weatherboard home in 2013, they were excited by the prospect of growing their own produce in their sprawling north-facing backyard lined with fruit trees.

But a soil sample test two years ago revealed parts of their Brunswick West property contained traces of lead in the soil that were as much as 10 times the level considered safe in Australia. 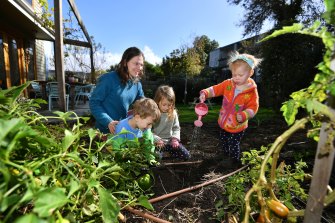 Julie Heller with her children Eleanor 6, Robbie 4, Rose 2. Julie sent soil to researchers as part of the program and found high levels of lead in her garden. Credit:Joe Armao

The Heller’s home is one of nearly 800 Melbourne residences where veggie garden soil was tested and included in new research from Macquarie University, which reveals 35 per cent of inner-city homes across Melbourne, Sydney and Brisbane have soils that contain more than the 300 milligrams of lead per kilogram, which is deemed safe by Australian authorities.

More often than not, those with high levels of lead were older homes with external lead paint where rain could wash traces into garden beds.

The self-selecting samples collected via the open-source, donation-funded program Vegesafe showed the City of Yarra area had on average the most samples with higher than what is considered healthy lead contamination in residential soil.

Eighteen out of the 40 metropolitan areas sampled had at least one vegetable patch where the lead levels were likely to exceed safe levels, with Brunswick-Coburg, Yarra, Darebin (North and South) and Maribyrnong topping the list.

Team leader of the Vegesafe program, Macquarie University’s Professor of Environmental Science and Human Health, Professor Mark Patrick Taylor, said the four biggest risk factors for lead contamination in soil were the home’s proximity to the city, its age, whether it was weatherboard and if it was painted with lead paint.

When gardeners send five zip-lock bags of soil from their properties to the program, they receive an analysis that picks up eight different contaminants, including arsenic. But Professor Taylor said lead was of particular concern as it was the one most often in excess of the Australian guidelines, and dangerous for children.

“There’s a variety of adverse outcomes such as detriments of IQ, behavioral problems, executive control, impulsivity, delays in maturation, etc – so basically it’s not good,” he said. ″⁣All of the global advice is prevention is key.”

Dr Chris Williams, Urban horticulture lecturer at Melbourne University, said it was important to keep the risk in perspective and to note the highest danger posed by lead was from “direct ingestion of soil”.

He said he had spent years living in weatherboard houses in Melbourne and working outside in gardens and blood tests had shown he had negligible levels of lead in his body.

“Overall, I would say don’t panic. Get the test done to get the actual information about the amount of lead or other heavy metals [that] are there,” he said.

“Then the critical thing is actually do all standard vegetable garden practices, add compost and check the PH levels. Wash all the dirt off your vegetables before eating them and wear gardening gloves.”

Raised beds with clean soil, or wicking beds that have no contact with the soil at all beneath are other ways to avoid planting in contaminated soil he said.

Because of their extremely high soil lead levels, and blood tests that showed their children had some traces of lead in their system – albeit within an accepted range – Ms Heller and her husband Tony decided to undertake earthworks in their garden to remove at least 20 centimetres of topsoil, and more where they wanted to have vegetable gardens and a chicken coop.

The couple spent thousands of dollars on the removal of the contaminated soil and bringing in soil from a provider who could assure them of the cleanliness of their soil, but they say it was worth it for their peace of mind.

“We always wanted our kids to run around outside maybe pick some fruit off a tree and eat it, get their hands dirty and realise there’s more to life than inside,” Ms Heller said.

For those without children, and who aren’t using their gardens to grow food, Professor Taylor said there were simple ways to reduce any likelihood of bringing in any dirt or dusts from outside into their homes.

“People should think about making sure that they don’t scalp the grass, that the grass isn’t too short when they mow it, that they mulch their garden to reduce the production of dust, and reduce access to the soil,” he said.

“Take your shoes off inside, wet mop the house, use a vacuum cleaner in the house. If you’ve got an old house, and you know it’s going to have lead paint in there, don’t sand it, seal any flaking paint.”

Professor Taylor said his research aimed to empower gardeners with knowledge and solutions, rather than frighten them, and that most people felt safer after they had received advice from the program on how to deal with the contamination.

“Irrespective of the finding and discovery of contaminants, we all hold the view in the group that it’s more important that people engage with nature, and grow vegetables and the benefits from that outweigh any risks,” he said.

Learn more about soil safety and how to get your soil sampled via Vegesafe here.