‘They can vote with their feet’: As Xi locks in power, many Chinese rush for the exits

Between the Detian Waterfall and Friendship Pass along China’s southern border with Vietnam, locals used to trade chicken and rice on bamboo rafts along the Red River.

“There were lots of businesses, big and small, near customs,” says Lyu Weijun, who runs a small hotel in Detian Village.

“Since the pandemic, all such flows had been tightly restricted. There were barbed-wire fences installed along the river. The pandemic situation in Vietnam is serious, but they treat it like the flu.” 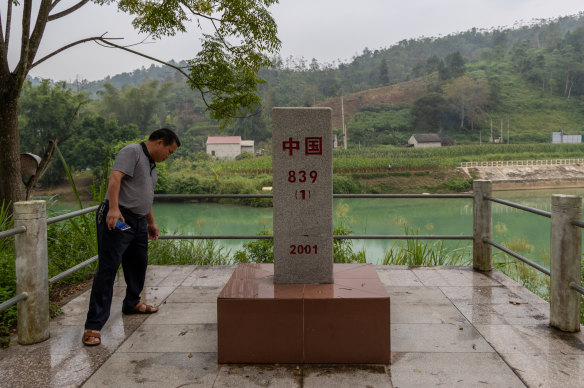 A man checks if a China-Vietnam boundary marker is damaged in Detian Village in September. Credit:Sanghee Liu

On this 1200-kilometre border between China and Vietnam, locals are acutely aware of their predicament. China remains stuck in the land of COVID-zero while its neighbour flourishes.

“This area has been locked down three times this year, all during the most lucrative seasons,” says Lyu. “The first time, it was just one night before the Spring Festival [in February].”

All it took for a lockdown in Detian was for one infected person from Guangdong province on the coast of China to visit Debao, a county that is 100 kilometres away from Lyu’s village. Two more lockdowns would strike in April at the beginning of the summer holidays and during the National Day holiday in October.

“I may not make enough money to cover the elevator maintenance fee,” says Lyu. 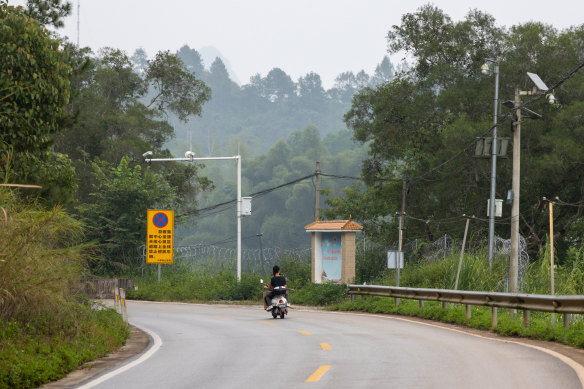 A young man rides by the barbed-wire fences and surveillance cameras along China-Vietnam border in Detian VillageCredit:Sanghee Liu

Lyu, like many Chinese business operators, is losing patience with a COVID-19 strategy that appears to have no end in sight. Now, as Chinese President Xi Jinping prepares to lock in his third term in power at the National Party Congress starting on October 16, many are rushing for the exit.

“They cannot actually vote, but they can vote with their feet,” says Alfred Wu a professor at the Lee Kuan Yew School of Public Policy in Singapore and an expert on the political economy of Greater China. “The middle class that can is quietly starting to leave or planning to leave.”

In Japan, British schools Malvern College, Rugby, and Harrow, famed for educating royals and members of parliament, are setting up campuses to cater to high-end Chinese demand. In Malaysia, the number of Chinese student applications has doubled. In Europe, there has been a rush on Chinese applications, to Greece, after the government announced it would double the cost of an investment visa from $380,000 to $760,000. Across Southeast Asia, but particularly in Singapore, Chinese buyers are dominating the market for properties worth more than $5 million – making up 20 per cent of sales so far in 2022.

“International schools in Singapore are receiving a lot of inquiries, not just from Hong Kong, but from the mainland,” Wu said.

In some cases, Chinese parents are enrolling their children in Singaporean schools and pay tens of thousands of dollars in fees to secure a place before getting out of the country.

Joe Jin, who owned a baby product online shop in China says he had been considering migrating to Canada for the past decade but circumstances this year forced his hand.

“What made me actually take action is the further education of my elder son who will enter high school this year and the bleak prospects of my own business,” says the 45-year-old, who has moved on a student visa and begun work as a courier. He misses home but does not regret his decision.

“Immigration brings a huge change in lifestyle and sometimes loneliness,” he says.

In Australia, the most recent set of Department of Home Affairs data shows that China once again became Australia’s largest source of permanent migrants in 2020-21, topping India for the first time in the past five years with 22,207 places.

Zheng Guo, an international steel trader, is now considering a move to Australia despite the ongoing geopolitical tensions between the two countries and his concerns about COVID-fuelled racial discrimination in Australia.

“Doing international trade requires lots of travel and visas. However, as foreign countries do not recognise the Chinese vaccine, I have to take prolonged quarantine, at my own expense,” says Zheng.

“Another reason is to provide a better educational environment for my son, who will enter middle school this year.”

Educational opportunities have always been a key reason for middle-class and wealthy Chinese families to go abroad to both give their kids a better chance at attending prestigious universities and minimise the pressures of gaokao – China’s high-stakes university entrance exams. But under COVID-19 they have also become an excuse to get out of a country that has maintained strict control over passports throughout the pandemic.

“China has not opened yet and many people are hoping to go out, but the Chinese government has been issuing few passports,” says Jack Zhang an immigration consultant based in Shenzhen.

Zhang says the number of passports issued in China in the first half of 2021 was only 2 per cent of the same period in 2019.

“Today, it’s almost impossible to get a passport for visiting family or tourism but studying abroad or doing business is relatively easy,” he says.

“Chinese people living overseas live a free life, like many of my friends who live abroad. However, inside China, we are in a closed state, not that free, such as in Shenzhen, as soon as there was an outbreak, it was locked down.″

Outside the Canadian visa centre in Beijing in September more than a dozen people were standing in a queue waiting to see if they would be allowed to leave.

“I’m planning to visit family members in Canada,” says one woman who asks to be identified due to the political sensitivities of travel. “The most difficult part of international travel is to get a Chinese passport because it is not issued regularly in recent years due to COVID-19.”

Getting money out of the country is also tricky. Chinese migrants have to establish bank accounts overseas, and then transfer their Chinese yuan into an exchange account run by another company. The exchange company then holds the yuan and transfers the equivalent foreign currency from a foreign exchange bank account to get around Chinese government restrictions on transferring money across borders. 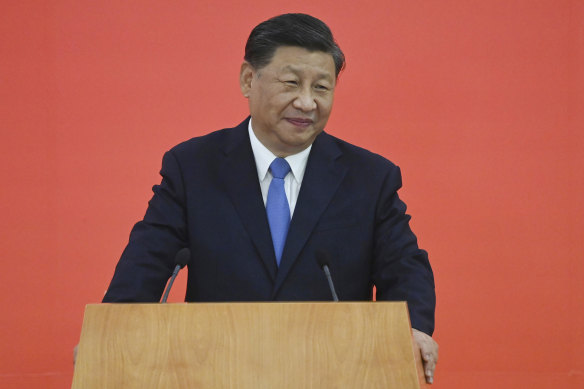 Xi Jinping is expected to be awarded an historic third term.Credit:AP

On Chinese social media services Weibo and WeChat “run xue” or “run philosophy” went viral in May, as residents in Shanghai grappled with food shortages and millions were sealed in their apartment blocks. But even as some of those pressures have eased, immigration agents say demand for a way out has continued to grow.

Some are resorting to extreme measures. In August, CNN followed 33-year-old Wang Qun as he made his way to the United States. The bubble tea shop owner got his passport by applying for a language school in Ecuador, flew to the capital Quito, caught a bus for 1600 kilometres to Columbia, took a boat across to Panama, spent three days hiking through the Panamanian jungle, made it through Costa Rica, Nicaragua and Guatemala before scrambling across the US-Mexico border. He was one of the dozens following instructions in an online forum on how to immigrate illegally from China to America.

“In the years after Xi Jinping came to power, China’s policies have become tighter and tighter, the economy is not doing great … and (his) dictatorship is only getting worse,” Wang told CNN.

More than 2000 Chinese Communist Party members will gather for a week from Sunday to anoint Xi as General Secretary for a third term where they could also name him as either Chairman or “People’s Leader” and elevate him alongside Mao Zedong in the pantheon of Chinese leaders. Xi has ruthlessly pursued COVID-zero more than any other world leader, turning an impossible task into a personal test for both him and the Chinese people.

Fences once again encircled neighbourhoods in Shanghai on Monday and staff were locked inside restaurants. Mobile units have been installed on sidewalks to carry away close contacts to quarantine, dashing hopes of any real easing of restrictions before the end of this year.

“We must remain vigilant against the spread of the epidemic, increase our confidence and patience in our country’s epidemic prevention and control policies,” Chinese government-controlled media outlet People’s Daily said in an editorial on Tuesday.

“[We must] overcome any numbness of the mind, any war-weariness, any thought of leaving things to chance, and any complacency.”